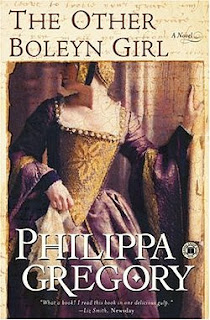 I guess I am a little late getting to this book by Philippa Gregory. It published in 2001. I came across The Other Boleyn Girl for one dollar at the Book Sale Room at our library.  I have always been interested in the court of King Henry VIII. I can remember watching the PBS production of The Six Wives of Henry the VIII back in 1970 when I was 15 years old. At the time, I could not understand why these women would be interested in a fat old man!:) But after becoming more familiar with that time period, I saw that women had little choice in who they married. Marriages were made to advance the family fortunes and what better for your fortune than to become the Queen of England?

Anne Boleyn and her family found out too late that just as you rise in the King's pleasure, you may pay with your life if you fall from grace. This novel is one of a set of the Tudor novels written by Ms Gregory. I wish I had known that before I started this book as I would have attempted to read the series in order. I went to Paperback Swap this morning to order three more of the six book series. That should tell you that I thought this book was very good.  The Other Boleyn Girl focuses on two sisters, Mary and Anne Boleyn. Both girls are pawns in a game played by their father and uncle. These men hope to acquire land, money and power by wedding one of the girls to Henry the VIII. I had never heard of Mary but apparently she was the first sister to catch the king's eye. Mary becomes the king's mistress because her father and her uncle tell her she will do whatever they tell her to do. And at that time women had very little say in their lives. As Mary put it, if you are a peasant or a queen you have only what your husband chooses to give you. Mary seems to genuinely love Henry and gives him two children, Catherine and Henry. But as she recovers from the birth of her son, Anne moves in and steals the king's heart.  And all of this happens while Henry is married to Katherine of Aragon, the daughter of Ferdinand and Isabella of Spain.  Henry's love and lust for Anne, cause him to embrace Reformation Theology. But does he embrace it so that he can divorce his old wife who has not given him a son? It would appear so. As head of the Church of England he can declare that his first marriage was invalid. Mary will soon  be glad that she was passed over by the King as her sister who failed to give the King a son is declared an adultress and a witch and beheaded days before the King marries his third wife. Divorced, Beheaded, Died, Divorced, Beheaded, Lived aptly describes the wives of this self indulgent king.

I liked the character of Mary. She did not want to do many of the things her family forced her to do and she grew up in a corrupt court that taught her power does not bring happiness. As the book ends, Mary has found happiness with a common man. They live happily on a small farm in the country where they raise her children as well as two children with her husband, William.  Ms Gregory adds some historical notes at the end of the book telling us that after the execution of her brother, George and sister, Anne, and the death of her parents soon after, Mary inherited the Boleyn holdings and she and William became wealthy land owners in Essex.  What about King Henry's illegitimate children? Catherine became a lady in waiting to Queen Elizabeth and married well. Henry was one of Elizabeth's trusted advisors to the end of his life.  If you enjoy historical fiction, I think this book will be one you will read with pleasure!
Posted by Arlene @Nanaland at 7:14 AM

Hello there, friend! I have not read the book but I did see the movie. :)

I will try to come back to read the posts I miss later tonight. I need to start supper - clam chowder and corn bread.