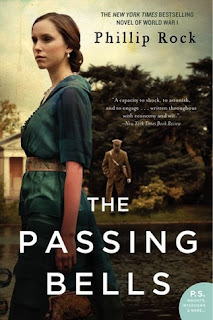 It is hard to believe that we will have to wait until January 2014 to see another series of Downton Abbey! And while I knew that  Matthew's character was going to be written out because Dan Stephens wanted to pursue other acting roles, I was so sad to see the ending of Season Three. I do own the Downton DVDs so I guess I will have to watch reruns until next year. And there is  Call the Midwife to look forward to in March but nothing can replace DA.

One of my favorite blogs is On a Clear Day I Can Read Forever by Nancy Pate. She recommended The Passing Bells Trilogy for all of us Downton Fans who love to read. I ordered the three books from Amazon for about $10 each. They are printed in the large paperback style which I enjoy.  I finished the first book in the series over the weekend and while it is like Downton Abbey there are some differences which is to be expected. Written by Phillip Rock in the late 70s, the Passing Bells series is set at the English Country House of the Greville family, Abingdon Priory. You will understand how the "big manor" is run because it is much the same as Downton. There is a definite Upstairs, Downstairs with all the same rules that Mr Carson enforces at Downton.  The Greville family has a mother who like Cora, was brought from America and her money helped keep the manor afloat. Hanna Rilke Greville is the daughter of a German American millionaire. Anthony Greville, Earl of Stanmore, is much like Robert Crawley. The Grevilles have three children, Charles, Alexandra and William.  So their manor is not in danger of being lost due to having no male heir.  The Passing Bells chronicles the lives of the Grevilles and their titled friends. One big difference in Bells, is that WW One is a major part of the first book. To be honest, it was brutal reading some of the passages describing the massacre of many young English soldiers.  To be honest, I had to just skim some of that portion of the novel.  So be warned! The novel did have a character similar to Matthew. Hanna's nephew, Martin, comes to visit. Martin grew up in Paris and Chicago. His father was disinherited by the Rilke family because he chose to be an artist rather than take up the family brewery business. Martin's parents die when he is relatively young so he goes to Chicago to live on the grace and favor of his Uncle Paul.  Just out of college and working as a newspaper man, he goes to England to visit his Aunt Hanna.  I think Martin is a mix of Matthew and Branson...the outsider in the family.  There are some scenes similar to Branson showing up at the Crawley's table for the first time as Sybil's husband.  As World War One begins, Martin stays in Europe to cover the war for his American paper.  There are many plot lines in this work and if you enjoy Downton Abbey, you will find The Passing Bells a good read.
Posted by Arlene @Nanaland at 7:39 AM

Arlene, sounds interesting! We'll have to have a countdown until DA starts again!