I have been continuing my policy of going to bed at nine every evening so I can read an hour before lights out!!  It is much better for me than watching television!  I finished two books this week! Go Me.

The first book is King's Mountain by Sharyn McCrumb. This novel relates the events surrounding the battle that turned the tide for the American Revolution and it took place in the Carolinas, not in New England. A makeshift army of Mountain Men decided that the Tories would not take their land that they had worked so hard to claim from the wilderness of the southern mountains. Scotch Irish for the most part, these men were fiercely loyal to the land that they lived on and farmed. Patrick Ferguson and his British Soldiers were no match for the riled up mountain men who had honed their fighting skills in wars with the Cherokee.  I am proud to say that one of my ancestors took part in this battle and lived to tell about it.  Ms McCrumb is the expert in writing about the people of the Appalachians. She truly understands the mindset of the people who live in the mountains. My own family migrated from Virginia to North Carolina and on to Georgia where many still live in the shadow of the mountains. I can honestly say that the present day Mountaineers are much like their ancestors who claimed the land in the 1700s.  If you enjoy historical novels, take a chance on King's Mountain. 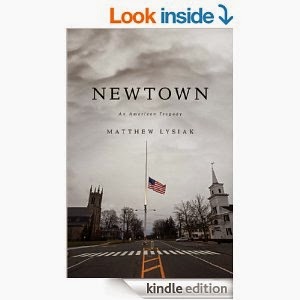 The second book I completed was this nonfiction work by Matthew Lysiak.  It has been a year and a half since Adam Lanza fired his way into the Sandy Hook Elementary School in Newtown, Connecticut, but the wounds from that day will never be completely healed.  This book does a good job of telling this tragic story from many angles. Mr Lysiak states the facts and does not fault find about this incident. That is what a tragedy is...an event causing great suffering, destruction and distress. There is plenty of all three to go around in this small Connecticut town. Adama Lanza was clearly a troubled young man who did not receive the help he needed but his actions are his own. I have to admit, I cried while reading this book. Anyone who is a parent could not help but empathize with the Sandy Hook parents. Everyday we send our children off to school, expecting them to come back in the door of our homes in the afternoon.  On December 14th, 2012...the faculty and students at Sandy Hook were in a celebratory mood. Christmas was 11 days away. On this day, the younger students were looking forward to having their parents come to school to make gingerbread houses.  But the day had barely begun when Adam Lanza began firing the guns that would leave 20 students and 6 faculty dead. One of the most heart breaking things about this tragedy was that the school intercom had been inadvertently left on, allowing all the students in the school to hear the agonizing cries of their peers.  I could not wrap my mind around the fact that this small town had to bury 26 people in one week. I am sure that many were going to multiple funerals for six days in a row. My heart goes out to the first responders who were just devastated by the carnage they saw as they walked into the school. Many people in this small town are affected with Post Traumatic Stress Disease.  And yet they go on taking one day at a time as they deal with their loss.  This book is not one you read, put down and never think of again. This book will stay with you as you consider the events of this work.

Now I am on to reading something less emotional. I just picked up a China Bayles mystery by Susan Wittig Albert so I will be in  Pecan Springs, Texas if you need me!!:)

Posted by Arlene @Nanaland at 7:26 AM

I've been reading the Outlander series for what seems like forever. Love them, and can't wait for the series to start on TV this summer!

My daughter in law is a fan of that series as well Terri.