Mellowing Out at Mellow Mushroom

Last night Marvin treated me, Amelia and her children to dinner at Mellow Mushroom in downtown Decatur.  Amelia thought she would be funny by posting this picture on Facebook with the hashtag, rude! 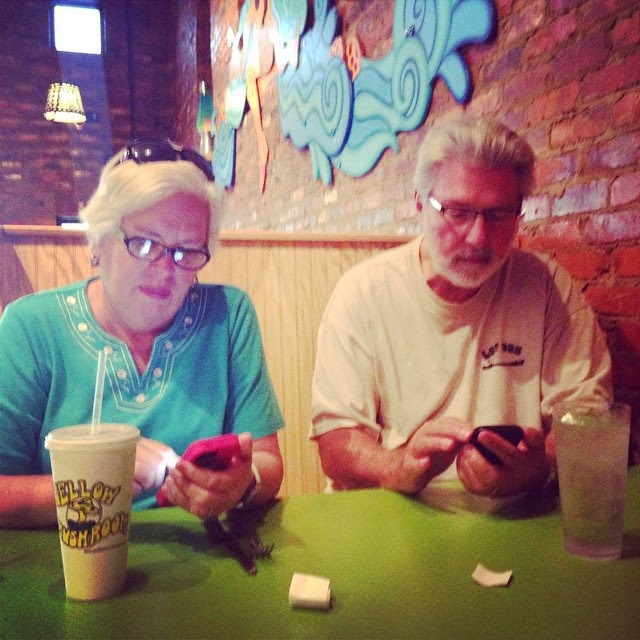 Oh my goodness, the comments that were posted. Apparently we are very funny! Marvin said he hoped this posting did not use up his 15 minutes of fame. :) I guess it is ironic that the "old folks" were being rude at the dinner table instead of the "younguns".

There is a reason we were on our iphones. Our nephew, Jeff, had just announced he was engaged to his girlfriend, Sarah.  I was texting Sis in law, Lanier, to get all the details and we were both looking at her reply as she had sent the same message to me and Marvin. By the way, Jeff proposed to Sarah in a very sweet way...he told her they were going dove hunting and when they got to the field, he had a table set up with a beautiful meal and music playing in the background! How could a girl say no to that. So we are happy for Jeff and looking forward to welcoming another niece to the Grimm family.

Posted by Arlene @Nanaland at 6:42 AM

Congrats to Jeff. That was a very unique way to ask her to marry him!

Congratulations to Jeff and Sarah! Fun to see a pic of you rude people. Lol

Thanks for dropping by Judy and Mildred! We are excited to have a wedding to look forward to, probably next spring or summer.

Well okay, Arlene, as long as it was special circumstances causing this bit of dinner table rudeness by the "old folks"! :D

Jean, I promise never to be rude again!:)

Fun photo, and a happy wedding to be planned!

What an intriguing name for a restaurant! What kind of food do they serve there? Congratulations to the happy couple!

Terri, every now and then our children pull one on us and Amelia got us for sure!lol Mrs R, Mellow Mushroom is a pizza place and by the way, Marvin and I used to eat at the original Mellow Mushroom in Atlanta when we were dating! The chain is 40 years old now!