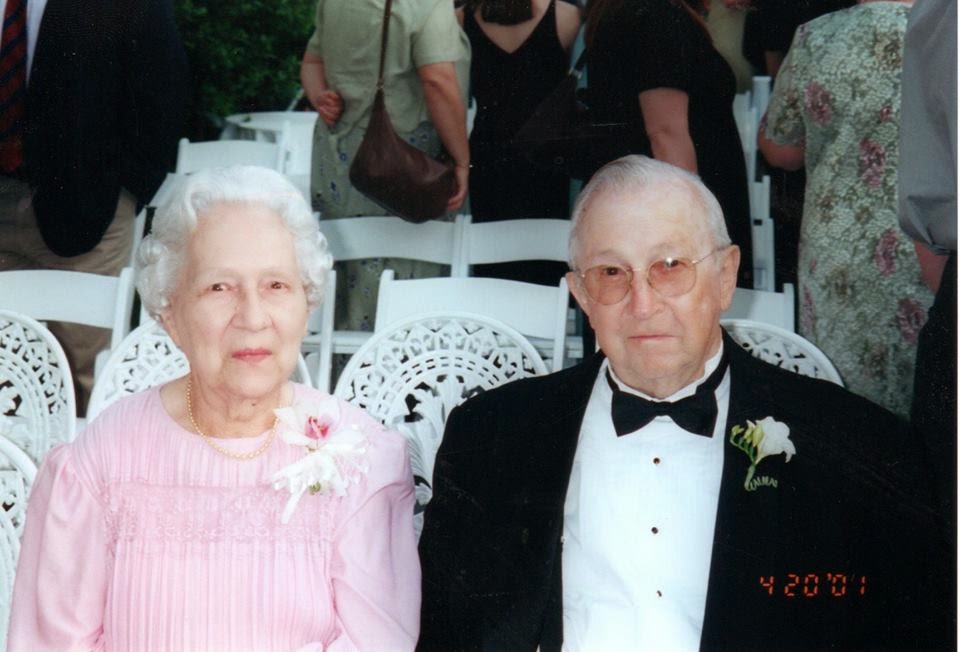 Today I am thinking of my late inlaws, Saramina and Marvin Grimm. September 6, 1947 was their wedding date. World War 2 brought Marvin's parents together.  Papa was one of the second generation of his family to be born in America, Minnesota specifically. His grandfather had immigrated from Germany as many Germans did in the mid 1800s. The Grimms were farmers and farmland was disappearing in their native country. In Minnesota, Carl Grimm found a nice big piece of land that his family farmed until the Great Depression.  Papa was the youngest of six children. His mother died in the Spanish Flu epidemic leaving her husband, Herman, to raise six children under the age of ten. Papa's grandmother took him in to her home, separating him from his twin brother and the rest of his siblings. He was just an infant at the time and several family members stepped up to help care for the children. When the other children went back to their father's home, Papa's fierce little Grandma Hasse refused to give up her baby.  When Papa was ten years old, Grandma Hasse passed away and Papa lived with his Uncle Tony and his Aunt Maggie who were his sponsors in the Lutheran church. Papa saw his father and siblings occassionally but he felt more a part of the Hasse family.  Growing up on Uncle Tony's farm, he helped his uncle as well as working as a farm hand for neighbors to earn some extra spending money. As many other of the greatest generation, he joined the army at the start of World War 2. He was sent to an army base in South Carolina where he made friends with a Savannah Georgia soldier named Peyton Mayo. Peyton introduced Papa to Saramina Crane and they were smitten. Mama G corresponded with her boyfriend through the war and prayed for his safe return. Papa landed at Normandy twelve days after the big landing and made his way across Europe. He told us of the cheering crowds of French people who were so happy to see the American Soldiers who liberated France. Then it was on to the Battle of the Bulge...Because Papa spoke German, life in the camp was not always easy for him. Some suspected him of having sympathy for the Germans but he was an American through and through. When he made it home he married his sweetheart and they began their life in Savannah, Georgia. Though he visited his family in Minnesota through the years he often told us that Savannah had made his blood so thin he could not survive in the cold Minnesota he remembered from his childhood.

Mama G was a special lady and a wonderful mother in law. She had a soft sweet southern voice and I can still hear her asking her grandchildren, "What do you need darlin?" She grew up in Savannah in the home she shared with her mother and her great aunt who remembered the Civil War. You can imagine that the old aunt was not too fond of any Yankee but she thought Papa was alright.:) Mama G was very close with her mother and her sister, Willilou as well as her extended family of aunts, uncles and cousins. Unfortunately Mama G's father deserted his family and this was at a time when single parents were not common.  Granna, Mama G's mother, took great care of her girls and both grew up to be lovely ladies.

When Mama and Papa G got married they were excited to have their own family and with six children they had a happy and busy homelife. All these great grandchildren of theirs would be a joy and delight to them.  I am so glad that I met Marvin and I am a part of the big Grimm family!
Posted by Arlene @Nanaland at 9:24 AM

Thank you for sharing this photo and a bit about the family history. Your blog will be very valuable and treasured by your grandchildren one day. Hope you are enjoying the weekend.

Thank you for that sweet comment Mildred. I enjoy genealogy and Marvin will tell anyone that I know more about his family than he does!! It is important to preserve this history.

A wonderful story and tribute to them and their love. The photo shows two very dear people!

Yes Terri, they are sorely missed.