While I was without internet and tv, I was able to read a WHOLE book in one weekend. Fortunately I had just made a library run before the internet went down. While browsing the new book shelf at the library, I came up a new series by Jill Patton Walsh. She is taking the Dorothy Sayers characters, Lord Peter Wimsey and Harriet Vane and writing new mysteries featuring them in the 1950s. Still happily married, they reside in Peter's family home as he has inherited the title Duke of Denver on the death of his older brother. He and Harriet have two sons of their own who are considering their futures...will they attend Oxford as did their parents?  Harriet continues to write her detective stories and they are gobbled up by mystery lovers.

As this book opens, Peter is asked to put on his role of Visitor at St Severins College in Oxford. It seems there is a dispute among the dons about the sale of an ancient manuscript. With the college deep in debt, some of the members of the school have decided that the sale of the precious book would be the answer to their problems. With the proceeds of the sale of the book, the college would purchase some land near the college as an investment for possible resale. Peter is expected to make the deciding vote in the matter as there is a deadlock among the dons. Peter knows that land speculation can be well, speculative!

Peter delves into this question with all his usual wit and discernment. Harriet accompanies him to the college where she proves to be valuable in probing the motives of the college in this matter. And of course, Peter's faithful butler, Bunter, is along as well, getting all the information he can from the servants of the dons.  As questions are asked, murder and mayhem becomes the order of the day. The Wimseys manage to unravel a very quirky mystery at Oxford.

While Ms Patton is not Dorothy Sayers, she does a good job in allowing the reader to enjoy the Wimseys once again. 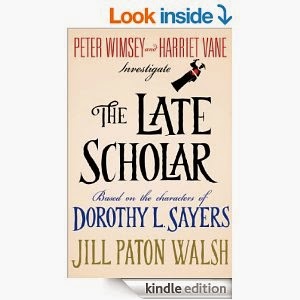 Posted by Arlene @Nanaland at 7:15 AM

Thanks for the review as I am always on the lookout for good books. Looks like we are in for another stormy night in GA!

I love anything about England, Oxford in particular. I learned to love the Wimseys, Morse and Inspector Lewis on PBS Masterpiece Theater.

Sounds fun! Couldn't resist visiting your blog having seen your comment on Judy's at Cranberry Morning.

Thanks for stopping in Mike! My roots are in Yorkshire England and I find all things British fascinating. You can always find me watching Masterpiece Theater on PBS to get my Brit fix!! I forgot to mention that I also enjoy PD James Inspector Dahlgleish.