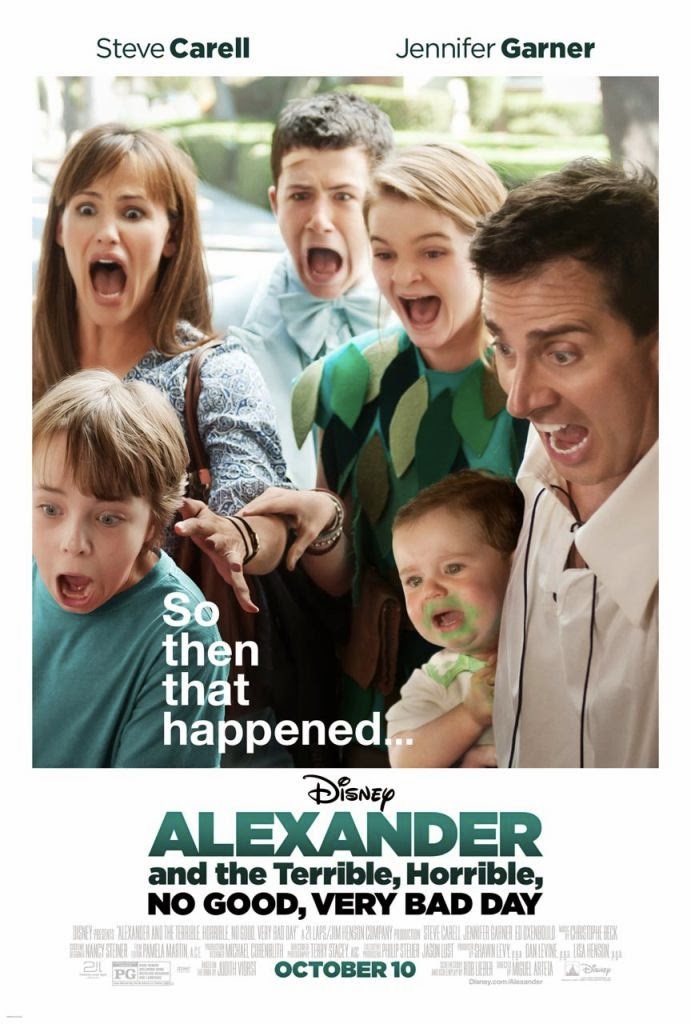 Kendall, Landon and I joined a theater FULL of other grandparents, parents and children yesterday to see Alexander and the Terrible, Horrible, No Good, Very Bad Day yesterday. Tuesday was the last day of fall break and for those who were not lucky enough to go away for the long weekend, a movie seemed like a good idea.

We saw previews for other family friendly movies so now Kendall and Landon have a list of movies that they want to see. One was the new Sponge Bob movie that comes out in 2015...sorry but Nana will not be springing for that one. Ask your parents!

I loved the book Alexander etc so I was wondering how the movie makers could take a children's book and make it into an hour and a half long movie. ( I had the same thoughts about Polar Express and I must say, that one was quite good.)  This movie is very loosely based on the book but it was entertaining.

Here is the premise...Alexander feels like he is a misfit in his family of perfect people. His mom is in publishing and is hoping to be made the new vice president. Dad is a PhD engineer who has been laid off from his aerospace job and is now a Fommy....a Father Mommy.  He is very positive all the time and knows something better is just around the corner. Jennifer Garner and Steve Carell are very believable in their roles. Alexander's teenage brother, Anthony, is dating the prettiest girl in school and is just a very nice guy. Sister Emily has snagged the lead role of Peter Pan in the middle school play and baby Trevor is so cute and lovable that no one can resist him. They are the Super Coopers....well except for Alexander who is at that awkward age and he has one of those TERRIBLE days on the day before his 12th birthday. When he tries to tell his family about it at the dinner table, he is largely overlooked. So at midnight, Alexander sneaks down to the kitchen to make himself a birthday sundae and wishes that his family could have a terrible horrible no good very bad day. And so the next day is an EPIC BAD Day for the Super Coopers.

The movie was entertaining...a few remarks that I could have done without hearing but overall a goofy and fun film. With Steve Carell as the dad, how could it be anything but goofy. I have to admit I love his comedy.  A very big positive of this movie is that it shows an intact family who love each other and kids who are not obnoxious. The siblings squabble but at heart they are good kids.  I would give it three out of five stars.  My grands enjoyed it. We had a good time talking about several of the themes of the movie and we all agreed that if you have a bad day, that it is only temporary. Think positive like the movie dad, Ben Cooper.

And for us older viewers, Dick Van Dyke made a cameo appearance. He is reading a book for children at a local bookstore and after looking at the young children he says, "Ask your parents who I am...or your grandparents!" I had to chuckle at that line.

So if you are looking for  a way to pass some time with a school age grandchild, this is a pretty good movie to see.
Posted by Arlene @Nanaland at 6:58 AM

We like kid's movies so I think we would enjoy it! Thanks for letting us know about it and your thoughts. The book is always better..even for kids! heehee! Hugs!

Thanks for the movie review. I always like knowing what others think of a movie before going to it myself. Nice to hear of an intact family, a rare commodity these days.

This one is cute but if you have a dollar theater near you, I would just wait until then to see it. I guess I just feel that most movies are over priced!

Sometimes the kids' movies are better than those targeting adults. Joe and I both enjoyed Frozen! No little ones here anymore, though.