I am back home after a quick trip to Georgia. My dad's younger sister, Jannelle, passed away on Thursday and her funeral was yesterday. It is hard to say good bye to someone you have known all your life and loves you and prays for you. 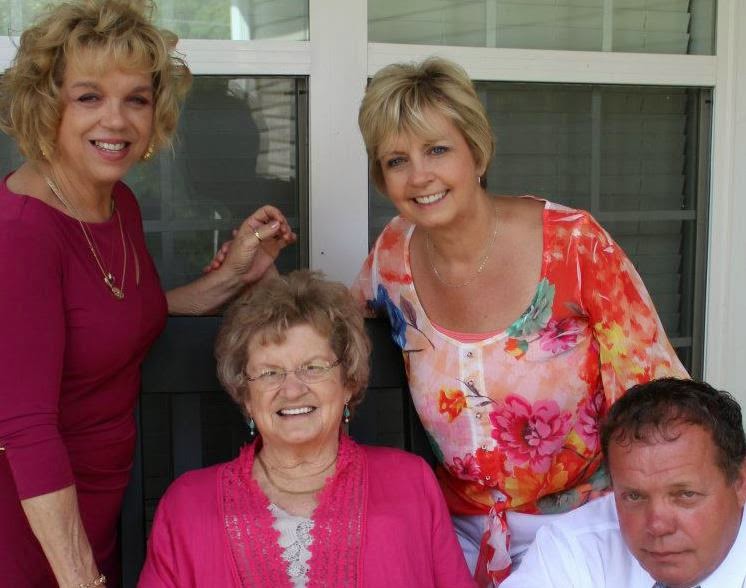 This is a picture of my aunt with three of her six children.  Aunt Jannelle got married as a teenager and had five children. She thought her family was complete but God surprised her with a baby who was born in the early 1970s...Chris. Chris was a Down's baby who required a lot of care but my aunt was up for it. She cared for him in her home until he was able to go and live in a group home where he lived happily until his death. Aunt Jannelle's oldest daughter and my favorite cousin, Carolyn, died of complications from Lupus.  In addition to burying two children she  lost two husbands and was a fortunate lady to have found three good husbands. Al, who she had been married to for almost six years at the time of her death, lost a precious wife.  She was truly the matriarch of her family. She was loved by all her children, grandchildren and great grandchildren. She not only took care of her family but cared deeply for her extended family and friends. Her funeral was a celebration of her life and both of the preachers who spoke at her funeral were quick to point out that her resiliency came from her faith in God. She certainly had a life that had many trials but she was a happy person and did not allow herself to have a pity party. I have always admired her sweet spirit.  I would like to ask all my blog friends if they would remember this family in prayer this week as they grieve the loss of their Mama and Grandmama.
Posted by Arlene @Nanaland at 12:59 PM

Prayers were already lifted before you asked, but I will certainly remember them daily as they go through this sad time. Your aunt seems to have been a strong, faith-filled woman, who was loved by many. There will be such a wonderful reunion one day!!

Yes Terri...I think of that reunion more and more often these days!!

What a sweet tribute to your aunt. She sounds like a wonderful, Godly woman. I will pray for her family.

I'm so sorry for your loss. I will definitely keep your family in my prayers. {{HUGS}}