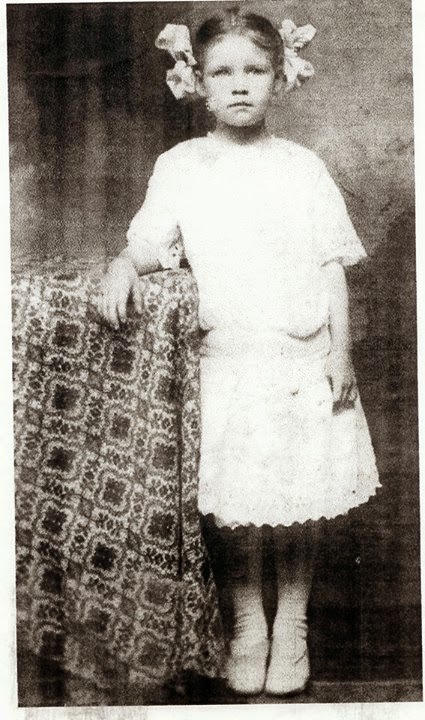 I had asked my sister to look for a picture of my great grandmother, Hattie, to add to my genealogy book about the Morris family. Well she has not found the picture that I wanted but she did find this picture of my grandmother, Naomi Swanson Tankersley.  She must have been around nine or ten in this photograph. I love those bows don't you?

We called her Grandmother. I was blessed to have her in my life until my late 30s so she was able to see all my children. The things I remember about my grandmother. She introduced me to sweet tea. We did not drink it at our house but Sunday dinners at her house included that famous Southern Sweet Tea. Whenever you saw Grandmother you were sure to get a hug and a pat on the back. She was enthusiastic with those back pats. Marvin was always worried that she was hurting our babies when she patted them! She did not pass on her green thumb to me. Grandmother could grow any flower or plant. She was a woman of faith and a prayer warrior. When my father was a boy he had appendicitis and almost died from infection.  His doctors told my grandmother that they did not think Daddy would live through the night. She told the story of how she prayed and begged God for her son's life. The doctor told Grandmother that her prayers to God had saved Daddy's life.

Grandmother did not have an easy life. When she was just a little girl her mother died of Tuberculosis. My Papa Swanson was left to raise her with the help of his mother. Papa did remarry to our Mama Swanson, Mary Bell Wilbanks.  I did not realize that Mama Swanson was our step great grandmother until I was a big girl. She loved us all and there was never a thought that she was not our blood relative.   Mama and Papa Swanson went on to have two children of their own but we were all one big happy family. When Grandmother married Granddaddy, she lost their first child. Then she had six more children but lost her oldest daughter to diphtheria. Then she lost another three year old daughter to diphtheria about five years later and my own father came near death at the same time.  How did people live through such things? It is hard to imagine a time when illness regularly claimed young children. Faith in God led my grandparents through the dark days. Grandmother and Granddaddy lived about two miles from us growing up...in fact our whole Tankersley family lived in one community.  I miss both sets of my grandparents. What a blessing it was that I grew up getting that special love that only grandparents can impart to children. I hope that one day my grands will look back fondly at Nana and all that she meant to them. My grands mean the world to me!

Life was certainly not taken for granted back then. Before antibiotics, they must've been scared every time a child got sick. I enjoyed reading this post and love that sweet photo!

Thanks for dropping by Judy! I agree, before antibiotics, life was very precarious! I have seen pictures of my "little aunts" and they were precious babies. I cannot begin to imagine the grief. As I looked at that photo, I realize my oldest granddaughter favors Grandmother. So sweet.

It is amazing how much easier we live these days then in past days. Love the photo of grandma, how special.

What a beautiful photo and you're right...they lived such a hard life and lost so many loved ones along the way. My Grands played a big part in my life too! Hugs, Diane

I so enjoyed hearing about your grandmother! That's a wonderful picture! My grandmother talked frequently about the two young brothers she lost to disease. I believe one was diptheria. Walter and Phillip were very young, so I never had a chance to meet two of my great-uncles. It had to be hard on parents to lose children back then. We take so much for granted today! Thanks for sharing!

Thanks for all your sweet comments! It was a very different way of life back then.

Such a treasured photo to have. Thank you for sharing about the family members. Your grandmother was a very strong Christian woman and I know you cherish your memories of her.

I was so tickled to find this picture that I had never seen. Things like that make me happy!!

Arlene, what a lovely post. Your grandmother was quite a woman. Doesn't it seem like they were made of stronger stuff back then? I think all that hardship just strengthened them.

I love her dress. Such beautiful lace etc.