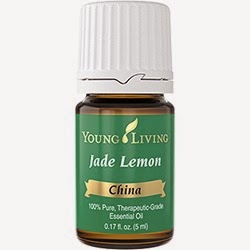 I have found another Young Living Essential Oil that is sure to become a favorite....Lemon Jade. This oil was just introduced by Young Living and I thought I would give it a try. Now it is my favorite to diffuse in the living room. It is a rich lemon scent and is much better for me than burning a candle.

This is a great oil to diffuse as it invigorates and helps with clarity and focus. ( Maybe that is why I had an urge to clean when it was diffusing!!)  Many say that the citrus oils when diffused just make you happy!

I may have to diffuse that this morning as I get all three grands dressed and going for the day. We had quite an afternoon yesterday. Landon had an appointment with the ENT doc for sinus and ear issues. We had to cancel the appointment due to our recent ice storm so I was determined to get him to the consultation. So loaded all three kiddos in the car, threatened both girls that they were to be quiet and let me talk to Landon's doctor without distraction.  They did fairly well but three kids in a small room is not for the faint of heart.  Poor Landon had double ear infections so we headed to Walmart to get his antibiotic...of course there was a wait so we walked over to the Subway inside Walmart to get ICEEs while we waited.  The squabbling began shortly after that! By the time we got the med and headed back to the car, Nana told each child that there would not be ONE WORD said on the ride home. I think they knew Nana meant what she said so it was a quiet ride as we listened to Patch the Pirate.  As I posted on Facebook, the last time I took three children to the doctor's office and to the drug store, they were mine and I was MUCH younger!!

Today we will get in the car once again to drive to Birmingham where Margaret will be returned to her loving parents. They have missed her and I know she will be glad to see Mommy, Daddy, Baylor and Elliott.
Posted by Arlene @Nanaland at 7:29 AM

Bless you. It DOES take lots of energy.

That is one of the joys of grandchildren, you can love them to bits and return them to their parents...

I suffered with lots of ear infections when I was young. Hope the meds work fast. I imagine you could use a rest and a strong cup of coffee! By the way, I found the McCafe coffee (like you posted about) on sale and it is delicious.

Have a safe and pleasant trip!

Diana, it is very quiet at my house this evening!!Mildred he is taking a very yucky antibiotic...bless his heart, he gags but keeps it down. Karen, thank you..just saw it will be only 60 degrees in Savannah on Saturday!! I was hoping for warmer temps but at least it is not 80!!