The Lords of Discipline 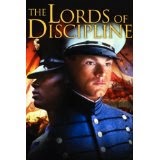 After reading The Death of Santini, I wanted to go back and read some of the Pat Conroy books that I had missed, starting with The Lords of Discipline.  Right off the bat, I will tell you that if you do not like bad language and cruel hazing, then this is not the book for you. All of Pat Conroy's books share a piece of the author's life and The Lords of Discipline is no different. Pat Conroy is a graduate of The Citadel, a well known military college in the South. Majoring in English and playing basketball for the school team, Conroy was one of the few graduates who did not sign a contract with the military on his graduation in the mid sixties.  After he wrote this book, his fellow graduates of the Citadel were not happy with him and it was a long time before the Citadel forgave him and actually had him give a  commencement speech at graduation.

Will McLean is looking forward to his senior year at Carolina Military Institute.  Soon he will graduate and wear the RING that distinguishes the men from the boys. However he is approached by Colonel Berrineau, the Bear, and given a special assignment.  The Institute will be receiving its first black cadet in the incoming freshman class, Bear wants Will to be his mentor and to make sure all goes smoothly with his transition. Will is not to help him as Mr Pearce must make it on his own at the school but Will must make sure no one makes it harder for this young man. It is a fine line to walk at the school that engages in the hazing known as Hell Week. All the incoming freshmen are treated brutally the first week of their semester and it lets up only slightly once they have proven that they can take the abuse.

Will becomes aware of a group on campus called The Ten. This group has been in effect since the early days of the school. Ten students are chosen each year to make sure that those Knobs who are not worthy to attend this school soon leave.  And while Hell Week is brutal, that is Sunday School compared to the torture devices of these sadists.  As the book winds to an end, Will is faced with a dilemma, to expose this group and suffer the consequences or to look the other way and let things go on as they have for many years.

This book is a story of friendship, betrayal and the courage to do the right thing. I had a hard time putting it down as the story was so compelling.  Mr Conroy is a writer who can make you feel the emotions the characters feel and I find myself pondering over his books for days after I turn the last page.

Of course after reading this book, I had to get something soothing so I am reading something light and sweet right now!! Next up on my list of Conroy books is Beach Music.
Posted by Arlene @Nanaland at 7:50 AM

Thanks for the review!

Hi Arlene, thank you for sharing the review on this book!
Julie

It may not be a book for everyone but a good story with a MORAL...do the right thing even if it costs you something. We do not hear much about that in our day and age of personal peace and prosperity.