What Color is Monday? 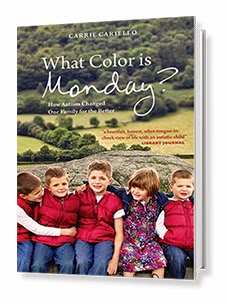 As many of you know, I am the Nana to a precious almost four year old grandson on the Autism Spectrum. Being educated as a nurse, I ran into Autism in my pediatric training but 40 years ago, Autism was rare. It is debated that it was rare because so many children were not diagnosed according to today's standards. I do believe there has been a big increase in Autism in the last 20 or so years. It seems everyone knows someone affected by this puzzling disease. Being an old nurse, I wanted to read everything I could find to help me to understand more about this syndrome. My husband has read a few books but he told me very succinctly that, "I am just going to be Baylor's Grandpa." Bravo dear husband! And Baylor LOVES his Grandpa. They have a special relationship for sure. My daughter in law, Katy, says that when Baylor is upset, he will often say, Grandpa, Grandpa, Grandpa as a mantra to calm himself.

I became aware of Carrie Carrielo when I read a blog post titled, I Know What Causes Autism. According to Carrie, mother of autistic son, Jack, he was Borned with it as his younger sibling put it one day!  And yes these children are BORNED with it. It is up to parents, siblings, grandparents, therapists and teachers to help them navigate the world that seems so strange to them.  Like most mothers, Carrie knew something was wrong with Jack almost from birth. ( Note to self...always pay attention to that maternal instinct). As a result of Carrie's diligence, Jack was diagnosed early.  Then came therapy appointments, special preschool etc. The things our family know all about now as well.  Carrie's book, What Color is Monday? is a great read for anyone who has just been faced with the diagnosis of Autism.  Carrie begins at the beginning and shares the journey of their family and how Autism has impacted their lives. While Carrie shares the grittier side of the disease, she also shares the happy times with Jack. His mind works in a beautiful mysterious way. Carrie also emphasizes how Jack's siblings have been such a help to him, each sibling in his or her own way.  After reading this book, I found out she has a new book out called, Someone I Am With Has Autism.  It deals with Jack as he has grown into a tween. After reading What Color is Monday, I feel as if this author is my friend. I guess that is why I keep referring to her as Carrie rather than Ms Carriello.  Her writing style is very reader friendly and I breezed through What Color is Monday in one day.  I highly recommend this book to anyone who is interested in learning more about autism.
Posted by Arlene @Nanaland at 7:59 AM

Thank you for sharing about this book. My sister had a little boy born with heart defects and Down Syndrome 21 years ago. He passed away at age 4. Like you, I became very interested in learning all I could on the subject. God bless my sister, she became stronger and went on to serve DS patients as a therapist.

Mildred, I had a cousin who was DS. He passed away several years ago when he was in his 30s. I think having Chris in my family has helped me to be aware of those who are different and to embrace the gifts they bring to our lives. So glad your sister was able to use her gift to help others.

Baylor is a lucky youngster, to have you two as grandparents!

Thanks for those sweet words Terri. I just wish we lived closer so we could be of more help to Ben and Katy.

Like you said....everyone knows someone. I, too, have a nephew. You would never know it today. There is so much that can be done now!
Bravo for you educating yourself. That's exactly what I would do. However, your husband has the right idea too!
Blessings for all of you!!! You are an inspiration.....

Thank you Linda..we need words of hope and you gave me some today!

Autism is indeed puzzling and heartbreaking. This sounds like a very helpful book. Glad you found it and let us know about it. I loved the Grandpa Grandpa Grandpa mantra. How precious!

Judy, my husband is Baylor's only grandfather as his maternal grandfather passed away when Katy was in college. So I am so thankful that they have a great relationship. When I go into their home in Bham, Baylor will look at me then around me to see if Grandpa is coming!! So funny!!