Going to the Chapel

Over the weekend we traveled to Memphis, Tennessee to see our nephew, Jeff, tie the knot with his bride, Sarah.  Marvin's brother, Lee, and his wife, Lanier, outdid themselves this weekend. After a lovely rehearsal dinner we enjoyed a brunch with the Grimms on Saturday and Sunday morning. In addition to his duties as a general surgeon, Lee is one good cook. We had breakfast casserole, homemade cinnamon rolls, fruit and frittata. And we also enjoyed world famous, Gibson's donuts! Best of all for Marvin was visiting with his three brothers and all his nieces and nephews. Mina and Amy, the Grimm sisters did not make it to the wedding.  I will post some photos from the brunches tomorrow but for now I wanted to share some pictures from the wedding. 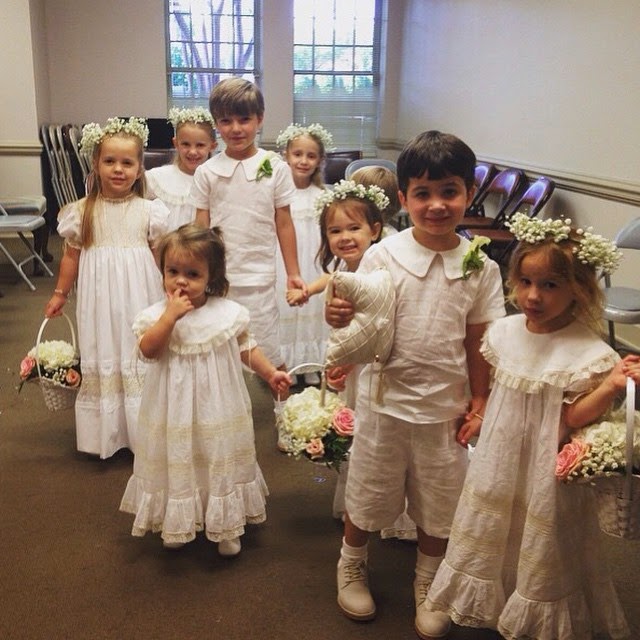 Count em!! Nine little children, all Jeff's nieces and nephews minus the two infants!! They did great walking down the LONG aisle at the church. Little Adeline( with her finger in her mouth) brought up the rear but she made it. After they proceeded down the aisle, they were quietly ushered to a room off the sanctuary to play until the wedding was over!! 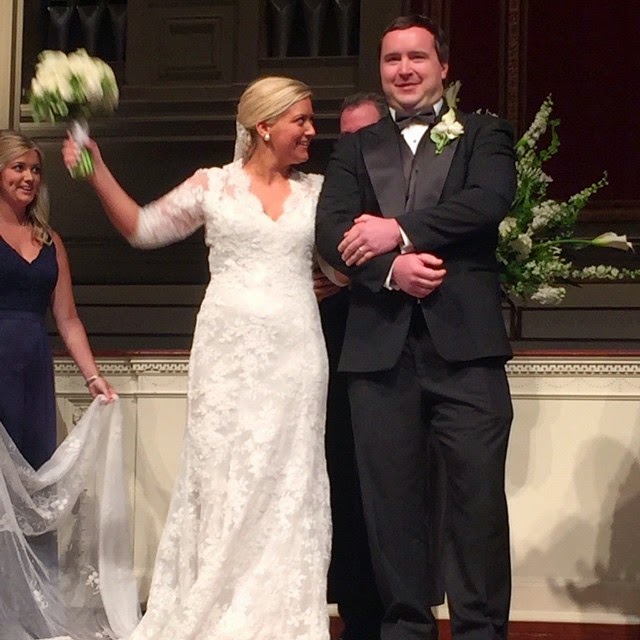 Jeff and Sarah are pronounced husband and wife. Jeff has a sister named Sarah so now we have to distinguish between the two. Lanier calls Jeff's Sarah, Sarah W as Wells is her middle name.  I grew up with two Aunt Joyce's...one was taller than the other so one was Big Aunt Joyce and the other was Little Aunt Joyce. Not sure that would go over well nowdays!! 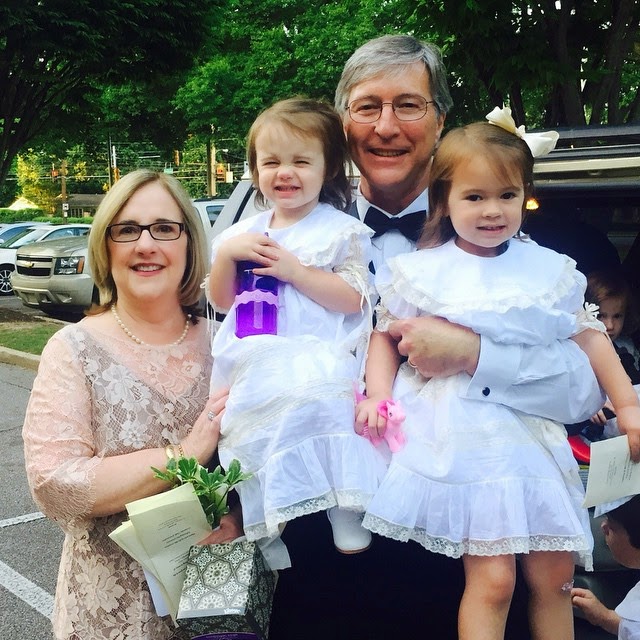 Lee and Lanier with Eden and Adeline Grimm....now the wedding is over and on to the reception!  Aren't those French hand sewn dresses adorable? Jeff and Sarah's wedding was a picture of a Southern wedding. Sarah wore her Grandmother's veil of Belgian Lace and the flower girls and ring bearers were dressed in Southern Style too. The only thing missing was big white bows for their hair!!  All of Lee and Lanier's children are married now..the next weddings will be William and Barbara's children! Marvin and I will try our best to make it to all of them!!
Posted by Arlene @Nanaland at 8:04 AM

I love weddings with lots of children. A friend of mine went to a relative's wedding in France. Her son was one of many children in the wedding. They all wore white but sailor collars. It was just adorable. Your little girls are so sweet and cute.

How absolutely wonderful that all the little ones could participate (and then be ushered to a play time)!! Great idea. They are adorable. The bride is beautiful and so is her dress! Can't wait to see more photos and hear more about it!

Debby, I think having them process in and then out was key!:) They are very sweet children and happy to have a new aunt. Terri, I did not get many at the wedding as the photographer was rather emphatic that there be no photography but his own. I did see others using their smart phones however!! I have lots of the Candids from our Grimm brunches.

Sounds like Lee is a bit of an overachiever! LOL Love the name of the couple: Lee and Lanier. 'Yes, Darling, Lee and Lanier are coming to dine this evening.' I'd love to say that!! :-) Anyway, congratulations to the newlyweds. Sounds like a lovely time and I adore the photo of the children. It is just darling!

I love weddings. Thx for sharing these pretty photos.

Those precious children all in white look like they stepped out of a magazine!!! SO pretty!!!!

Judy, I had to laugh at your comment about Lee and Lanier. Lanier is named after her grandfather, as is the custom in the South, last names are often used for first names. And Lee's whole name is Leander Morel Grimm after his Great Grandfather. It was a beautiful wedding Mildred and Linda, those children stole the show! I am glad Sarah was a beautiful bride as those children were a hard act to follow.