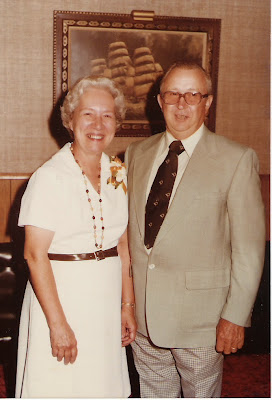 Mention the word, mother in law, and you will get many different reactions. Most of them are less than polite. But in the mother in law lottery I was a winner! My husband's mother, Saramina Grimm, was like a mother to me. Born in Savannah, Georgia, she had a sweet southern accent. I can still hear her saying, 'What do you need darlin?" to her grandchildren.  The oldest of two sisters she grew up in a house full of women. Her parents were divorced in a day when that was not the norm. She lived with her mother and two of her great aunts. The great aunts had gone through the Civil War so when a young soldier from Minnesota came calling, they were leery. He was a Yankee! After WW2 had ended, Saramina married Marvin and they went on to have six children. I married her oldest son.

She was always gracious to me, coming to stay with me when I had my children, taking care of me, the kiddos and my Marvin. She was always up to go shopping and could outlast me in the browsing department.  I cross stitched, she crocheted and we both loved learning new crafts. When her health was failing, I had the opportunity to spend the night with her in the hospital. On the evening she passed away, I was at the bedside with the rest of the family. She had a big impact on me and was such an example of sacrificial love.

It has been a week of reflection for me, thinking of the mothers who have left their mark on my life. I am so thankful for each one of them.
Posted by Arlene @Nanaland at 6:44 AM

Arlene, what a sweet tribute to your mother-in-law! I, too, had a wonderful MIL and miss her so much.

Jean, every time we have a new grandchild, I feel like I should call her and tell her about it. I miss her so. It is good to know that these sweet women live on in our hearts.

I have been blessed in the mother-in-law department too. I've had two who were both wonderful to me. When I got divorced, after 10 years of marriage, I hated losing his parents more than him! I really miss Joe's mom. We had so much fun when she would come for a couple of months in the winter (from Pennsylvania). She actually died in my arms. I was holding her when she took her last breath. In retrospect, it was a beautiful moment.

I hear about so many "bad" mother in laws and I am glad I cannot relate!! We have had a few divorces in our family where we wanted to keep the non family member as well Terri!:)

Wow this is such a nice tribute to your mother in law! How nice to have had that relationship with her. I never knew mine since she died a long time ago! Wishing you a nice Friday & Happy Mothers Day!
Julie xo

You hit the jackpot with your mother-in-law! :-)

What a wonderful mother in law. Happy Mother's Day to you.

Thank you for your sweet comments. I was truly blessed.