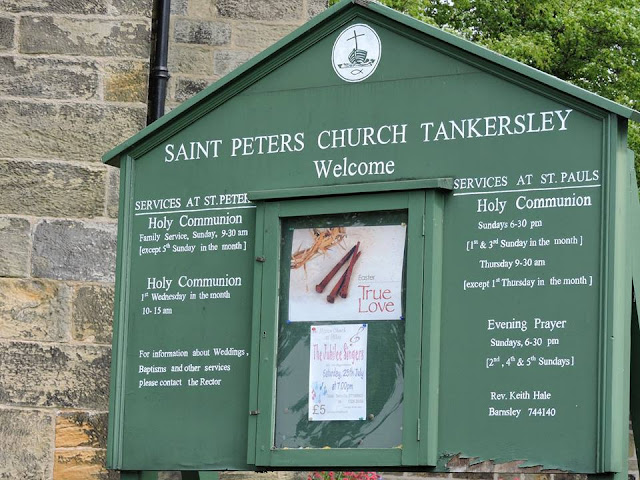 One of my cousins was able to take a dream trip to England and while she was there she visited Tankersley, England. Why was that place so important to her? Well we are Tankersleys!! If our research is correct, all the Tankersleys in the United States are descended from a set of brothers who immigrated from Yorkshire, England.  One story says our original name was Tancred and it became in a place name, Tancred's Lea( pasture).  Over time it became Tankersley.  The Tankersley boys landed in Virginia, moved from there to North Carolina and  my line finally ended up in Georgia. Most of my branch of the family is from Ellijay, Georgia but my great grandfather moved across Fort Mountain to Chatsworth, Georgia.

Helen reported that it is just a small village and she was unable to find any Tankersley ancestor's graves there but still it was worth the trip to visit the place of our roots. I told someone that we had not changed much in moving across the ocean. We liked the mountains of Appalachia as it probably reminded the ancestors of the hills of home and the people of Yorkshire, England have quite the accent! Here in America we have our Southern accent with some "mountain" thrown in! Every time I hear myself on  a recording, I am appalled. Do I really sound like that????When we lived in Louisville, Ky, I lost a bit of my southern accent but after living in NoAla for 31 years, I am back to my slow Southern Drawl.

The Tankersley Clan has no claim to fame that I have found in my genealogy research. My ancestors were mainly farmers. I will say we have a love for land that is evident even now as you could tell from my cousin, Steve's land that I featured in a recent post.  As my husband reminds me," They are not making more land, hold on to what you have!!" That is one reason we are thinking of building a get away cabin on our land there.

So now you know my maiden name...one I am proud of! However I will say I was happy to marry a Grimm for two silly reasons. One, I moved from the end of the alphabet to the sorta beginning of the alphabet! I was always one of the last in line at school! And I went from having a name that some found difficult to pronounce to one that was one syllable.  However, I continue to be amazed at the people that pronounce it GRIME!! Give me a break...it does not even look like Grime!! It has two m's for heaven's sake.  I usually remind people that it is Grimm like Grimm's fairy tales. Of course, many young people look at me like, What? So I now say, Grimm like the TV show!!

Wonderful trip for her. I enjoyed learning more about your name. My maiden name was Williams, and I was always last in school, too! MANY people mispronounce John's name (Nalley rhymes with valley) but folks say...nail e !!!!! Weird!

How wonderful to know some of your heritage!!
My maiden name was Ewing - as in the TV show Dallas. Of course Dallas wasn't around when I was a maiden! Then I went to Davis and a few times some wacky people would even ask how to spell that!!! Now I am Chapman and it's pretty easy except that some people think I am saying CHAT man! Must be that southern drawl......

What a wonderful story and I'm sure it must have been a delightful trip. Thanks for sharing!

How fun to visit your ancestor's home!! I hope she has lots of pictures to share with you! I love genealogy! I did the opposit of you...went from Kelly to D'Orsaneo! LOL

Don't you just hate mispronunciation of your name. I get both mine mispronounced at times, so I become Diane M'Tingly who is a different person altogether from Diana Mattingly. Oh well. I enjoyed the rundown on your name history and development. I'm always interested in the origin of names and place names.

I have a cousin named Diana and she HATES to be called Diane, as she often is!! Diana is one of my favorite names...so feminine. My maiden name is unusual but I have run across quite a few Tankersleys here in Alabama so I guess they get around. :)