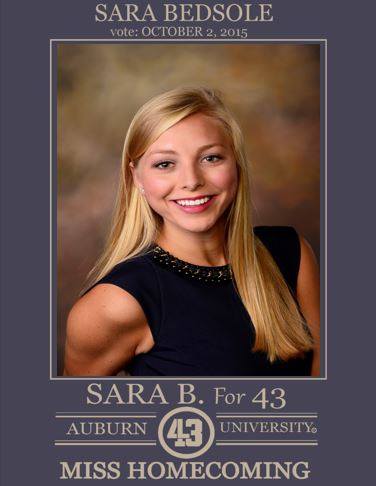 First let me say that I am not an Auburn fan while many of my friends are! When you move to Alabama you must automatically pick a team...you mark in down on your Alabama drivers license! Ok I am just pulling your leg but the people here in Alabama take college football very seriously! We are Georgia Tech Fans as my husband got all three of his degrees from there and we proudly scream when Tech loses a game, "That's Alright, That's Ok, We're going to be your boss someday!!"   Our oldest son went to Alabama so that helped us to make our decision to pull for the Crimson Tide.

One of my favorite people is running for Homecoming Queen at Auburn this week and I am a BIG Sara Bedsole fan. I have known this sweet young lady since she was in my class at Central Weekday School when she was just two years old.  I remember going to the Bedsole home for a home visit. We did that back in the day. We visited the students and the parents in their home before school started. We believed it made it easier for the parents and the child if they had spent some one on one time with the teachers. At our visit at Sara's house, she had me by the hand showing me around. She led me to the kitchen and opened the fridge!! Susan, her mom, told me later that it was completely mortifying to her as she did not remember if the fridge was view ready!! Sara was one of my favorites and she really could have run the class herself...she was that smart. One day both of us teachers had to be out and a sub was called in. I told her that if she needed any help to ask Sara!!

And now here Sara is running for Auburn Homecoming Queen. Her charity is the Lutzie43 Foundation. The foundation is in memory of Phillip Lutzenkirchen, who was killed in 2014. He was an Auburn football player who was well know and well liked. But one poor choice ended his life. This foundation emphasizes making good choices so that you leave a legacy to be proud of!

I know Sara is making an impact on her world for the good and I am so proud of her! I am crossing my fingers that she will be the Homecoming Queen this weekend.
Posted by Arlene @Nanaland at 7:35 AM

I hope she does well Arlene. She seems like a lovely girl.

I am hoping she is the winner...it is nice to see a good Christian girl do well!!

Oh oh. We are UGA fans all the way here! My daughter is a TN fan all the way. So our household is divided. But now, you'll have to be an Auburn fan this time. That girl is a beauty! Look at that smile!!! I'm partial to blonde hair beauties.

She is beautiful inside and out!!! Seems to be a rare thing these days!

How great is that to know Sara and to cheer her on to Homecoming Queen! Sure hope she makes it and I know you will keep us posted!! What fun!

Isn't it great to see someone that you know is a sweetheart in this position? I hope she gets it!

Terri and Mari, I hope I have good news to report on Monday!!