Monday was the Big Day for Barry and Marvin. While Sharon and I did some retail therapy at Hamricks Department Store in Fort Oglethorpe, GA, the guys headed to the Big Game.

Barry did the driving duties while Marvin navigated to Atlanta. After parking at the Tech campus, the guys took the Stinger bus to the Mercedes Benz Center. 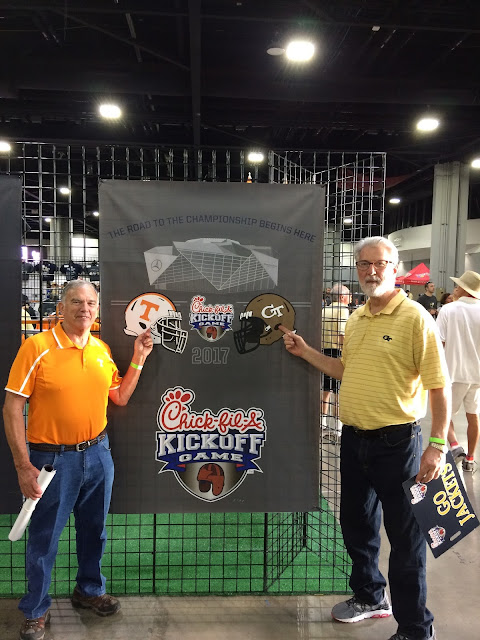 You know they were good friends to be able to attend this game together. Marvin said that there was a lot of entertainment for the fans as they waited to go to the Dome. Chic Fil A gave out free nuggets, Georgia Tourism gave out bags of peanuts. The Big Orange Band belted out Rocky Top while the Jackets Band shared Ramblin Reck.  Marvin said when the teams entered the stadium, one GA TECH fan shouted out that Tennessee did not even have a car. The Jackets are always led onto the Field by the Ramblin Reck. 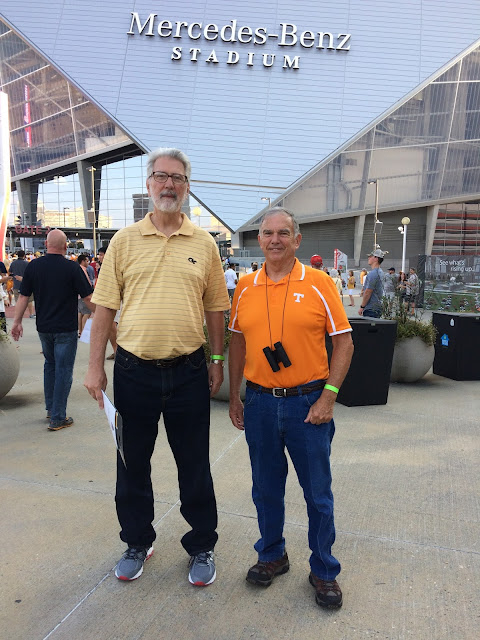 I have to say it was a heart breaker of a game. Tech lost by ONE POINT.  Barry said the adrenaline of the Big Orange win helped him to drive home without falling asleep. The boys rolled into Grimmwood at 2:30 AM.  They had a great time and are already talking about a re match!!
Posted by Arlene @Nanaland at 6:00 AM

Fun times. Rooting for our teams can be hard sometimes. I still love my team though.

Well it sounds like they had a great time. I can see that it would prevent one from falling asleep while driving! I have no team, but it is fun to hear the enthusiasm in your voice and in others who love their teams so dearly. I know I'm supposed to be a Badgers and Packers fan, and my boys certainly make up for it. :-))

It sounds like both guys had a super time at the game. Sorry it was a heartbreaker for the Georgia team!

Oh no...sorry they lost but it must have been a great game! Hugs!

Good times!!! Made me smile and I love the photo of them both!

I watched that game and rooted for Tech. It sure was exciting however. RJ