Good Tuesday morning and Happy Anniversary to Amelia and Todd. They are off on an anniversary trip to Hawaii. I am not going to say anything more about that or I might be guilty of coveting.:)

1. I always get so many comments on my Cracker Barrel posts. Thanks ladies. I have to share that I did go back to Cracker Barrel and I bought all the houses. 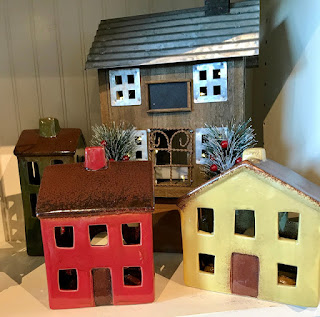 Yes..the three pottery houses were a set and I wanted the little rustic house for Grimmwood. As usual, the prices were very reasonable so I decided to go for it. 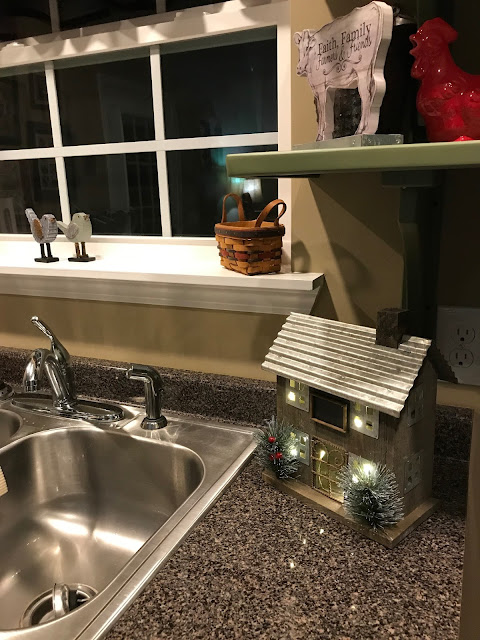 here is the little rustic house at Grimmwood. Marvin claimed I was trying to add Christmas decor in September. I told him it was  a fall and winter decoration. I just love how it looks sitting on the counter.

I seldom look at the number of followers I have because I love my loyal readers, I do not worry about popularity. However, I noted I am two followers away from 60. So when I reach 60 followers, I am going to do a Cracker Barrel give away.  I am not sure yet what it will be but coming from Cracker Barrel it will be cute. And you must be a follower to be entered into the drawing!

2. Last week was the 30th anniversary of the tv show, Thirtysomething. 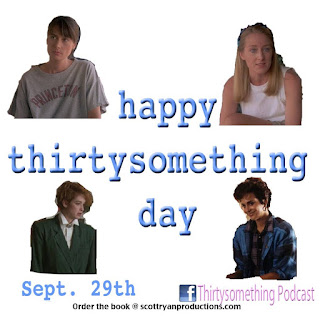 It was one of my favorite tv shows when I was younger. Marvin and I watched it together and we could commiserate with some of the feelings of the characters.  Many accused the characters of being whiny. Oh my goodness...compared to today, they were very reasonable. My favorite actress on the show was Patricia Wettig, who played Nancy Kreger Westin.  In the four years that the show ran on ABC, Nancy grew by leaps and bounds. When she was diagnosed with ovarian cancer in the third season, I can remember that myself and several friends were in deep mourning for her. It was the fear that every young mama has...that you will not live to raise your children. So am I the only sappy one here? Did anyone else watch Thirtysomething? 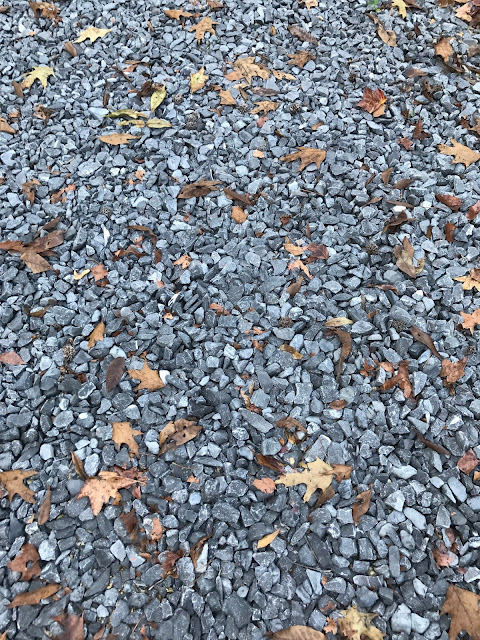 The leaves are falling down...

4. We had a pleasant interlude at Grimmwood. 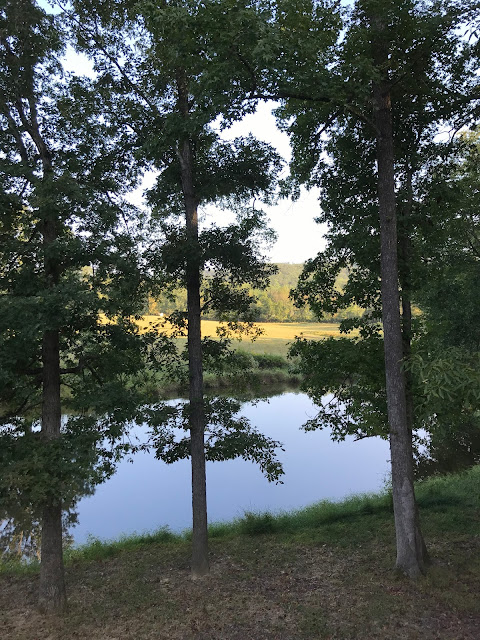 It is truly our happy place. We drove down to Atlanta on Saturday to see Tech play North Carolina and we were pleasantly surprised when Tech won. However...out big game is not until November when we play Georgia. Georgia is VERY good this year so I hope I am surprised by the outcome of that game.

5.One of my goals this week is to clean and organize my craft room. Between my finishing the cross stitch projects and the grands making various things, it is a mess.  I organize it regularly thinking that I will keep it neat but that never happens.

6. If you are looking for a good book to read, check out The Hired Girl by Laura Amy Schlitz.  What a charming book about a young girl who  just wants to get an education. In 1911, girls were not expected to attend high school. Joan, our heroine, becomes the unpaid and unrespected housekeeper when her mother dies.  When she demands she be able to keep the egg money for herself, her father burns her three treasured books, gifted to her by a beloved teacher. That is the last straw! Thanks to the foresight of her deceased mother, Joan is able to run away from the farm and take a job as a hired girl in Baltimore. She works for  a wealthy Jewish family and learns all about that ancient religion. In the meantime she pursues her confirmation in the Catholic church and with the permission of her boss, reads extensively from his library in the home.  Joan gets in a lot of scrapes but her intellect and her loyalty are very inspiring.  I think I read this book in one day! It was a Newberry Award Winner for young adult fiction.

Well if it is Tuesday it must be housecleaning day!! Then carline duty this afternoon. A Nana's work is never done!
Posted by Arlene @Nanaland at 6:00 AM

I love the little houses and the rustic one is just right from Grimmwood. That is a pretty photo taken from your porch - so peaceful. Thanks for the good book review. Enjoy this pretty weather!

I love the sweet houses too and I'm glad you got them while they were there! The rustic one is my fav....reminds me of the one Susan Branch has in her kitchen. The book sounds good! I'll mark it to read! Hugs!

I am glad you picked up the houses; they are adorable and the rustic one looks super on your counter. What peaceful and beautiful surroundings you have at Grimmwood.

Congratulations to Amelia and Todd...anniversaries are always good things to be noted. I love your little houses. The one is perfect at Grimmwood. Can't wait to see what you do with the others.

Good for you going back to get the little houses! I love the one on the counter at Grimmwood. Perfect spot for it! And that view from your porch ... so serene. Now I am trying not to covet!

I linked to your Cracker Barrel Christmas post on my Christmas blog! I enjoyed it so much I had to share.

It's always enjoyable wading in the stream with you, Arlene!

My husband is away and I sent him looking for the bear ornament you bought at Cracker Barrel, unfortunately they didn't have it at the one he went to. Anyway, I would love to enter your giveaway, I'm a follower.
I think the little house is Charming and it's a "seasonal" décor!! Love it there.

Such a pretty, peaceful scene, I can see why it's your happy place!
Have fun cleaning your craft room, I have about given up on mine!! Mary

Thanks for the shout out Mrs T!! Mary I will check at my local Cracker Barrel and see if I can find one for you!! I am glad to do it. Sandy I am still pondering and the houses are still in their box. Diane, you will love that book. I gave it five stars on Goodreads. Mildred, thanks for stopping by with your sweet positive comments. I think if everyone had a blog and got the nice comments i get we would all be better off11

Those little houses are adorable, and I love the one at Grimmwood. So cute! I will have to look up that book. It sounds right up my alley! Good luck with the craft room. The only way I keep all my stuff clean and neat is by keeping in a small, rolling cart. Our apartment is too small for me to spread it all out anyway. Plus, this way I can craft anywhere in the house!

As a Brit now living in the US I had never heard of Cracker Barrel til I read your blog. In the UK Cracker Barrel is a cheese! I googled it and Im smitten, I hope Hubby and I can visit one day.
I love your little houses... and good call in saying the one on the counter is for Fall ;)Its very cute.
I wont mention Hawaii either... although when I die I want hubby to stand at the airport hand my ashes to someone flying to Waikiki and have them spread my ashes on the beach. For now I WILL covet the view at Grimmwood
Have a great day
Phoebe x

I love the little houses, especially the little rustic house at Grimmwood. Perfect place for it to sit. You are now 1 away from 60, lol... hugs, LJ

I enjoy going to Cracker Barrel, it's hard to go and not bring something pretty home. Of course the food is good too. The little house looks great on your counter, I love little lights. The book sounds good. I haven't been reading too much lately...I think it's time for cataract surgery. Going to the doctor soon.

I am so glad to read that you got the pottery houses and the rustic house! They are SO cute and the placement of the rustic house seems to be perfect! I never watched Thirtysomething. Maybe I'll find some reruns...

Arlene, I love those little houses you found at Cracker Barrel. Did you put battery operated tea lights in them or do they come with tea lights? I am going to have to go to CB soon. Congratulations on all your followers! ♥

Gina, I have not even opened the box yet. I will probably use the battery tea lights in them.

Those little houses are adorable and I love the one on your counter.
I don't know if I'm an official follower, but I do follow you on Bloglovin. I didn't see a button on your blog to become a follower...

Oh gosh, yes, I was a fan of Thirtysomething! It seems strange when I remember how we used to have to wait a whole week for each new episode. I, too, remember when "Nancy" was sick and I was watching with baited breath to hear her diagnosis. I don't think I could have taken it if she wouldn't have been okay. Do you remember that Nancy's doctor was played by a younger Patricia Heaton, later of "Everybody Loves Raymond" fame? I truly loved that show.

Miss Dishywoo, I have all three seasons on DVD so I can still enjoy the show!! And yes, Patricia Heaton( Another of my favorite actresses) was great as Nancy' OBGYN. Lines from this show still run through my brain.