Sorry to be late posting today but we got in late last night. We sailed through our long trip home from Savannah until we got to Birmingham and it was bumper to bumper traffic going north. Marvin and I got off at the Cullman exit and made it home safely. We took a new route to Savannah to avoid Atlanta. I am sure if we had gone through the Big City, we would have been even later.  If you are interested in how we got to Savannah from Decatur, Marvin mapped us a route that took us to Birmingham then down highway 280 to Columbus, Ga where we took Hwy 96 across the central part of Georgia to Interstate 16 which takes us to Savannah. It is probably an hour longer driving but if you have been in Atlanta lately, you know it is better on the blood pressure! 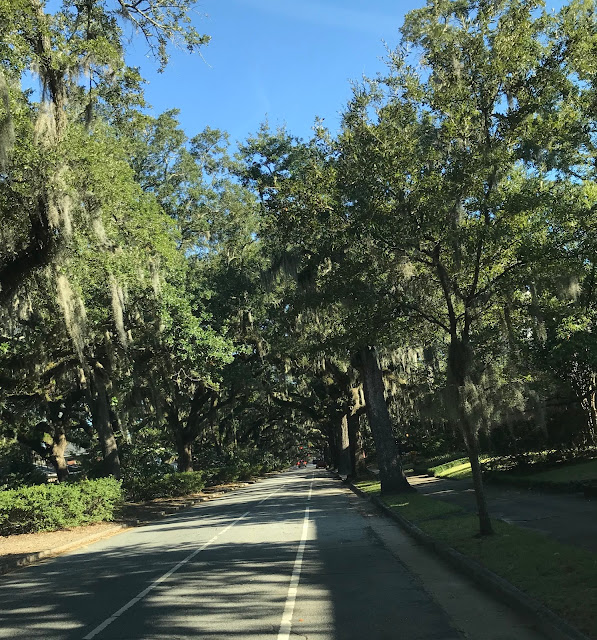 I love the big old trees with the Spanish Moss hanging down.  This is Washington Avenue, my favorite tree in Savannah. The streets are lined by old homes that are so lovely.

We partied in Midtown at Mina's house. We had five tables of family and friends in attendance. 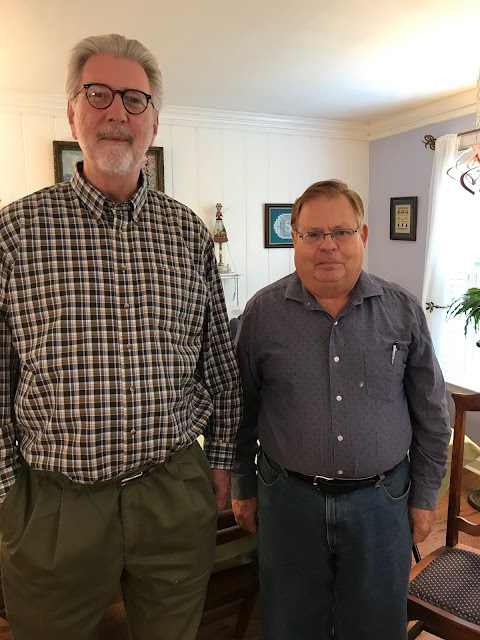 Marvin and Mina's brother in law, Robert.  They were having out having appetizers while waiting for the feast. 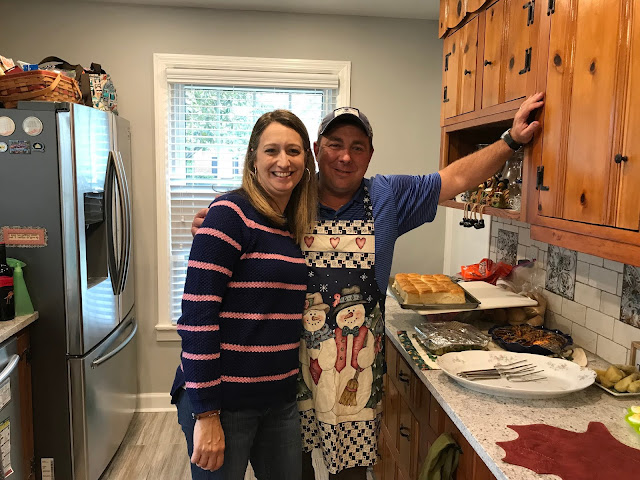 Oldest nephew, Stephen, and his lovely wife, Aaron.  Stephen and his brother, Benjamin cooked THREE turkeys. One was roasted, one smoked on the grill and one deep fried. They were all delicious. 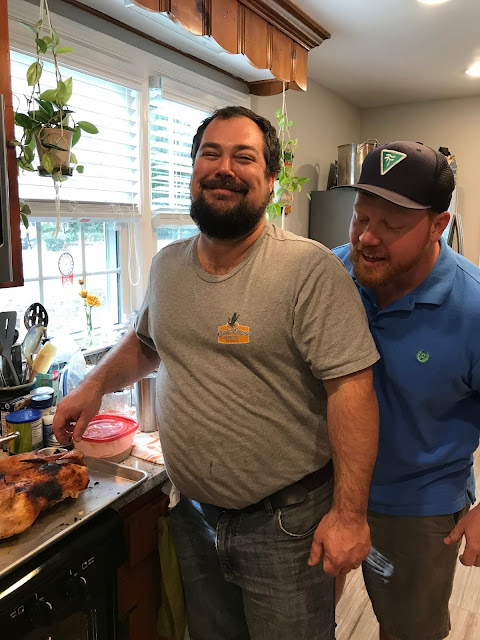 Nephew Benjamin and soon to be nephew, Seth, checking out the fried turkey they collaborated on Thursday morning. 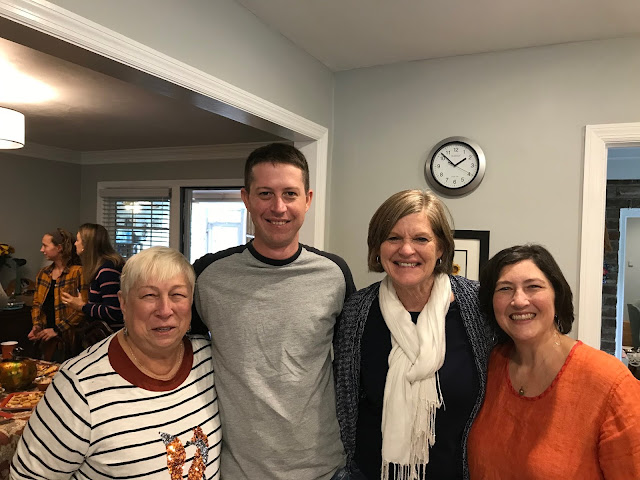 Mina, nephew Will, sis in law, Barbara and niece, Ami. 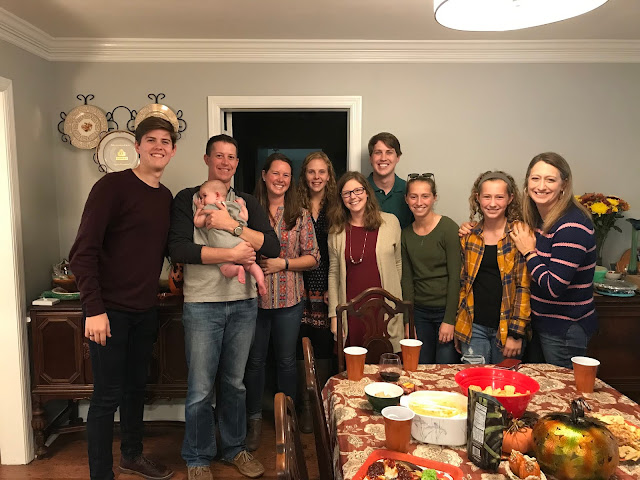 The cousins along with inlays and baby Greta. 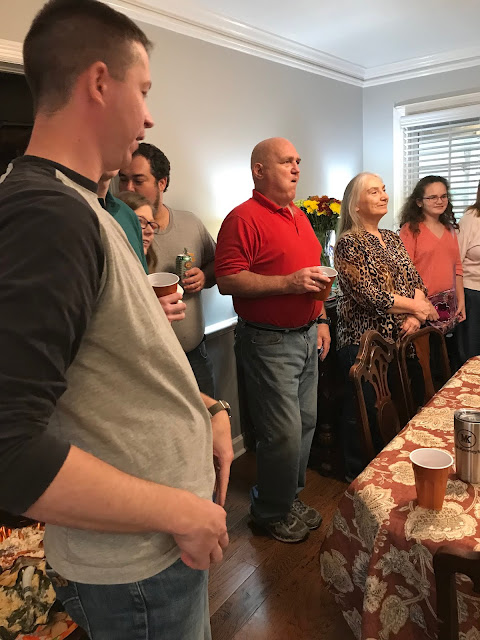 Gathering for prayer before the meal. 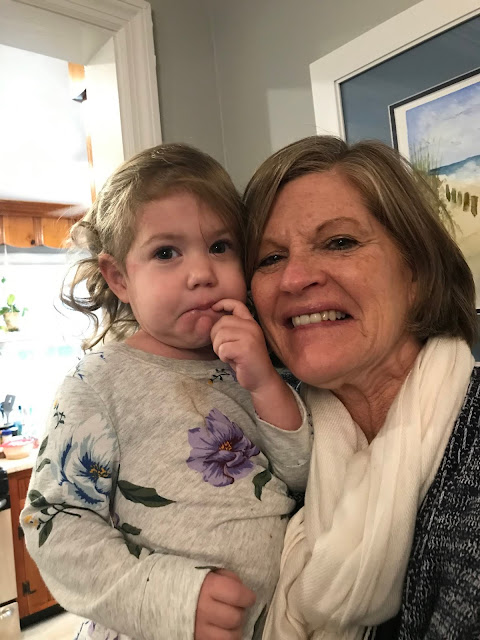 Grammy Barbara with Ella.  The Grimm Tribe is increasing.  While we were ar Mina's having Dinner, our granddaughter, Audrey announced on Facebook that she is getting a Little Bruder. lol We will welcome a new grandson in June.  Very Thankful for another blessing. 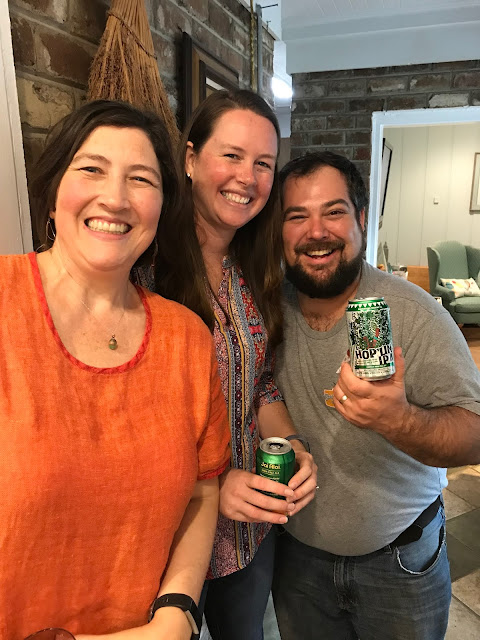 Ami and Benjamin along with Maggie. Maggie and Seth are engaged and getting married next year. She is the niece I did the cross stitch piece for recently. She loved it and even Seth thanked me for the gift which touched my heart. 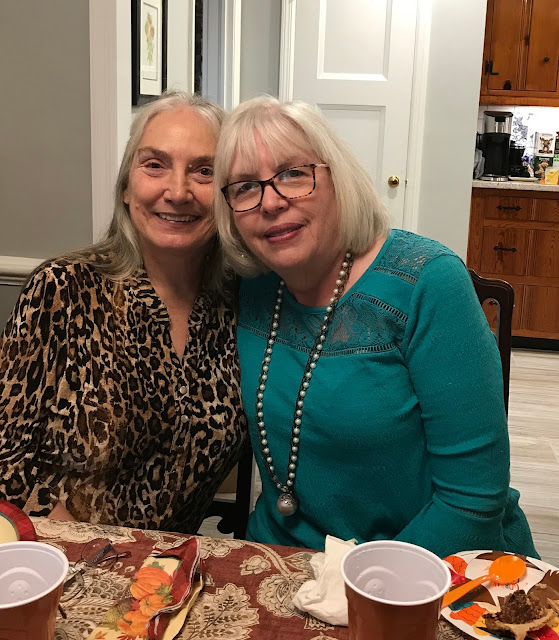 This is Marvin's cousin, Dewilla. She and I have been friends since we first met over 42 years ago. It was good to spend time with her this weekend.

And one final picture of Marvin's favorite part of the meal..... 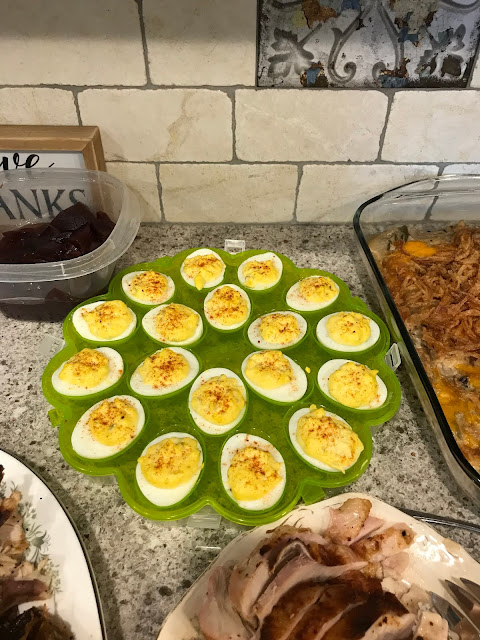 He loved Deviled Eggs and there were several platters on the buffet.

So thankful for our family. One of the reasons we were all there was to let Will know we will be praying for him, his wife, Jennifer and baby Greta while he is deployed to Afghanistan. 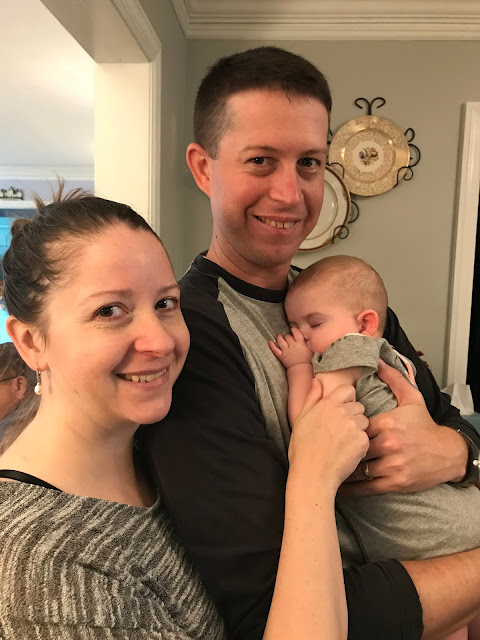 We are thankful for young men like Will who serve our country. By the way, Jennifer serves our country as well in the National Guard.  Will deploys at the end of December and will be gone 400 days. He is commander of an Artillery Battery from Savannah.  I am going to admit that this aunt shed a few tears when she hugged her nephew's neck on Saturday evening. We will be praying for Will's safety as well as the safety of the men he commands.  We will also pray for Jennifer and Greta while they are waiting at home.

I hope all my blog friends had a lovely and meaningful Thanksgiving.

Posted by Arlene @Nanaland at 6:59 AM

Such a reminder of how we need to pray for those headed overseas. It will be hard to leave that precious baby. It was nice to see a face for the Grimm cross stitched piece. I am sure just like us too much food and all delicious.

Oh Arlene, thank you for sharing your Grimm Thanksgiving. What a crowd and what a spread of food you had. My husband would have gladly eaten a platter of those deviled eggs. Will add Will, his family, and his unit to my prayer list. Have a restful Monday!

So glad to see you had a wonderful Thanksgiving with your family.

Looks like a wonderful family Thanksgiving, Arlene! Thankful to hear you are safely back home.

God bless Will for his service to our country AND to his lovely wife for supporting him while he serves! I sure do miss big, noisy, love-filled holiday gatherings!! You are so blessed to have been there for Thanksgiving with so many family members! It looks like such a wonderful time for all!

What a wonderful Thanksgiving you had! I'm very excited about the new baby! Audrey will be a good big sister.
I loved all the pics. Benjamin looks like he could be Charles brother I think.