Let There Be Light

When we moved into our townhouse 11 years ago, one thing bothered me. The BIG ugly fluorescent light in our kitchen.  I do not have a before picture but here is a photo of what our light fixture looked like. 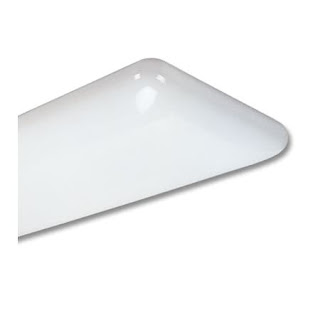 It did the job but I did not like it. Since our unit is the middle unit of three, we get very little natural light. So we need good lighting and that old fluorescent, while ugly, did the job. But I dreamed of canned lighting that would disappear into the ceiling.  It was not Marvin's dream. He is a typical man and scientist. If it works it does not have to look pretty.

For my anniversary this year, Marvin told me to get the lights I had wanted. Well I was on the phone to Mooney Electric right away. I had seen Luke Mooney's work in the houses of friends. He had taken away an ugly light and replaced it with LEDs.  Just what I wanted. 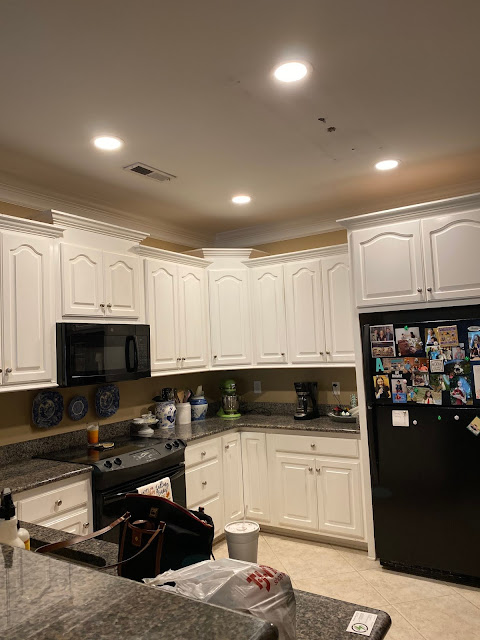 Here is the result. I do have to get two small holes patched and the ceiling painted but it looks so much better . And by waiting 11 years, I have the new LED fixtures that are flush with the ceiling and project so much more light than the old cans. While Luke and his crew were here we had him replace all the old can lights with the LEDs. I had a dimmer switch put on the lights in the living room as they are BRIGHT, but we really needed the brightness in the kitchen.  I did not realize how dark the kitchen had been even with the fluorescent until we got these new lights.

If you are in the North Alabama area,, I will give a big thumbs up to Mooney Electric.

*worked the whole time they were here

*cleaned up their mess

If you are wondering this job took about three hours start to finish with a crew of four. I always like to know how long it takes to get remodeling done so I thought you might like to know this as well.

One down side to the bright lights. I see my white cabinets have  some spots that need attention!!

Yippie. I have a few can lights but they have these old covers on them. I really need to see about switching them our because at the Auburn house they are uncovered and make a huge difference. And by a cover I mean like a shower door with clear vs a glazed one.

The difference in lighting is incredible, Arlene. I know you will enjoy them greatly. Have a good Monday and enjoy your stitching time with your group of stitching friends!

You have a beautiful kitchen and the lights are perfect! How nice to get exactly what you want and get it done right. I'm always amazed at how efficient the people are here too. Enjoy your day!

Congratulations on the new lights in your kitchen!!!! They look wonderful! I know how happy you are with them because I've been through similar lighting circumstances with our various houses over the years.

Your kitchen is very attractive! I am happy for you!!!

I love your kitchen! I am blessed to have a hubby who can do this. He's put those lights in our living room, kitchen and our family room downstairs. I like them too.

Congratulations!!! I know how nuch you must love those lights!! And how romantic of Marvin to give you one of your heart's desires!

Best gift EVER! :-) We had the fluorescent in the kitchen when we moved here...not all that bright and the flicker tired out the eyes quickly! After we save for a total kitchen re-do we had the can lights installed....what a difference! So very easy to spend hours in the kitchen baking and cooking... enjoy yours! Just in time for cookie season! lol!
Contractors that are reliable, talented and know how to communicate are as rare as hen's teeth! I'm sure most people reading your post want to know if they are locations in EVERY state! ;-)

Your new lights look GREAT! I am so glad you are happy with the result!! Thanks for sharing it with us!