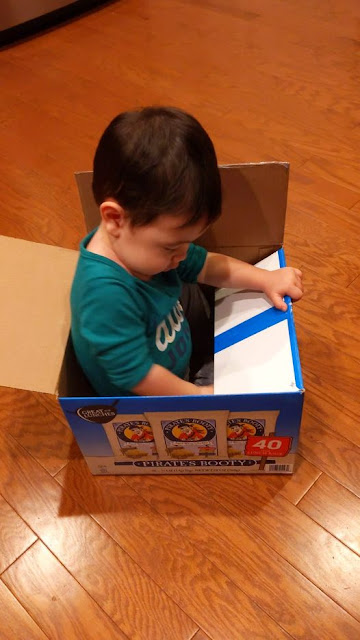 What is cuter than a baby in a box? I guess we all have photos of our children in boxes.

Charles said Joshua was being a pest the other morning when he had some things to get done so he put Joshua in this  box. He stayed there for quite a while, playing.  My aunt suggested he put him in a laundry basket with some toys as that was one of her tricks. Charles said he had already been in the laundry basket and had tipped it over to his dismay.  This box is a pretty snug fit. I will have to show Charles the boat that Sandy at I Majored in Home Economics made for her young grandson. ( It was very nice!!)

All this talk about boxes reminds me of the book, Christina Katerina and the Box. That book was beloved by all three of our children. It tells the story of a little girl who turns a box into many things using her imagination.  I still recommend this book to young parents. It is an oldie but goodie. I still have a copy of it in my Nana Box of Books.

When we painted the Man Cave/Grandkids room, I went through the toys and books and got rid of some that were broken or the kids have out grown them. It was rather sad. Kendall and Landon are big kids now and the younger kids are not here very often so I bit the bullet. I donated a few things and now the room is neater. I still have my memories but it is amazing at how quickly children grow up. I was looking at Instagram and noted that one of the two year olds I taught at Central Weekday School started med school!!  Now that did make me feel old but also proud that this young woman is reaching for the stars.

Life has its seasons and sometimes I have to remember to enjoy the season I am in today!

That little book sounds fun. I am ordering it. At school, we used a book in Language Arts called, Not a Box. I have a feeling that the Christina book might be a lot like that one. My two little ones make all sorts of things out of boxes. Amazon shopping provides many sizes and shapes of boxes for kids to use these days! :)

Oh Arlene, Joshua in the box made me chuckle. I remember the laundry basket with toys in it for my brother and also for the little girl my Mom took care of. You are so right about life having its seasons and taking time to enjoy the one you are currently in! Enjoy your Wednesday!

Boxes are some of the best toys! I agree that times goes by so fast and we have to stop now and then and realize where we are in life. Hope you have a good Wednesday.

That really is the cutest! We have some pics of our grandsons in boxes...and now they are teens! Enjoy your day! Hugs!

Yep... kids always seem to like the packing supplies more than the actual toy. It's so good for their imaginations to see what can be done with a simple box and packaging materials, too. Joshua sure is a cutie, Arlene. I sure wish these kids didn't grow up quite so fast--it's making me feel very old!

I had to chuckle at your student memory who is in med school now. Just today, we drove through an area we don't usually travel through and I noticed again a dentist office. The dentist was a student at the Catholic high school where I worked back in the early 1998s. Makes me feel old every time we go past his office. That sweet boy in the box is so precious! I remember having fun in boxes when I was a kid. I enjoyed your post!! xo

That pic is the cutest! Kids and cats like boxes.
I've had that experience of seeing someone I used to babysit or teach at church on Wed night, and suddenly they are grown up!

Children in boxes are always a great combination! Joshua is so cute! I wonder if he is sailing a pirate ship?

Wow- a former young student is now in Med School! Where does the time go? ♥