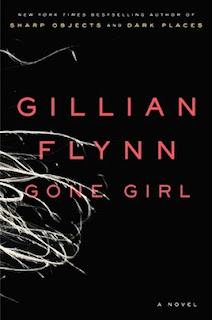 Gone Girl has been "the talk" of my Tuesday Afternoon Book Group so I had to read it to find out what the Buzz was about.  I must admit that it was a real page turner! One of the better thrillers I have read in quite a while but I will say that reader discretion is advised. There are scenes in the book that may be offensive to some readers.

Amy Elliott is the beloved only daughter of Rand and Marybeth Elliott. They are psychologists who have written the Amazing Amy books that have been their bread and butter for 20 years, making them very rich along the way.  The Amy books can be found in every school library across the nation and Amy is an example for all children as she always does what is right. The Real Life Amy struggles along these lines. She wants to be perfect like Amazing Amy but she (of course) falls short. Any person in her life who points out her character flaws, is no longer a friend to Amy and is punished in particularly vicious ways.  Fast forward to Adult Amy...she meets Nick Dunne and realizes she has met Mr Right.  Nick is a small town boy who has worked his way to being a popular writer for a magazine based in New York City. But Nick is not perfect. He is a very self involved Mama's Boy and seems to enjoy being taken care of by the women in his life.  He and Amy marry and all is well for about four years. Then Nick loses his job as a result of the downturn in the economy. Amy's parents have lost their fortune due to bad investments, forcing them to borrow from Amy's trust fund. Amy and Nick are left with enough money to buy a bar in Nick's hometown of North Carthage, Missouri.  Arriving in Missouri, they are forced to rent a house in a neighborhood of houses that are vacant due to foreclosures...many are invaded by squatters! If that was not depressing enough, Nick's mom is dying of cancer and his dad is in a local nursing home suffering from Alzheimers.  In addition to his job helping his twin sister run The Bar, Nick takes on a part time teaching position at the local junior college. As he sees it, he is teaching them about a journalism career that is only a pipe dream.  Let's just say Amazing Amy's life is not so amazing any more.

On the morning of their fifth wedding anniversary, Amy goes missing.  Of course the police and public opinion settle on Nick as the evil husband who has done away with his wife. And there is plenty of evidence to prove that Nick is a liar and a cheater. Just when you think you have this mystery figured out, there is a twist in the road!! Hats off to Ms Flynn for providing the reader with a very good whodunit! I could not help but note that the main character is Nick Dunne...could this be a tip of the hat to Dominick Dunne? Dominick Dunne was known as Nick to many of his friends and of course the late Mr Dunne is known for his novels about barely disguised real life murders.  One of the tv personalities who led the witch hunt against Nick had to be based on Nancy Grace!!  My favorite line from the book was when Nick asked his parents in law if they thought Amy might have been kidnapped by Judith Viorst so that Alexander would have no more terrible, horrible, no good, very bad days?  Now that was a laugh out loud moment though inappropriate for a "grieving" husband to even suggest it!

If you enjoy mysteries, this one will keep you guessing until the end of the book!! Give it a try!
Posted by Arlene @Nanaland at 7:18 AM

Arlene, that does sound intense! My guess is the evil husband! :)

I'm not telling Mrs R!!lol....quite a surprising ending though.