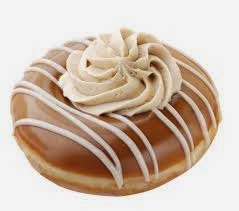 Doesn't this Coffee Creme Donut from Krispy Kreme make your mouth water? We had to stop by the Krispy Kreme store on Ponce De Leon for a donut fix on Saturday. I think this is my new favorite Krispy Kreme donut. As to the street name, Ponce De Leon....yes it is named for the famous explorer but in Atlanta it is pronounced Ponce De Leon...the leon being said like the man's name, Leon.  Most Atlantans shorten it to Ponce. When I was in nursing school, it was not unusual to make a late night run to Krispy Kreme for a pick me up!! 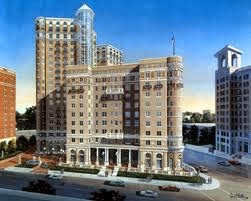 After getting our donuts, we headed downtown to Peachtree Street where we checked in at our hotel. We were very happy to stay at the Georgian Terrace Hotel which is just across the street from the Fox Theater.  The Georgian Terrace housed the actors from Gone with the Wind when they were in town for the premier of the film back in 1939 as well as hosting the Gala for Gone With the Wind. This hotel has been a downtown landmark since 1911 and in 1986 it was designated a Historical Site in Atlanta. 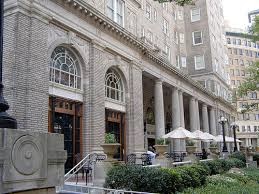 It is just a beautiful hotel....marble floors, elegant chandeliers and old time charm. It is the perfect place to stay if you are in Atlanta to see a play at the Fox as it is right across the street. No dealing with the parking or traffic woes Atlanta is known for these days.
Posted by Arlene @Nanaland at 7:01 AM

Sounds like a delightful trip. Nothing better than KK doughnuts!

It was a great get away Mildred!! And that donut...oh my goodness.

That donut looks DELICIOUS!! What a great vacation!