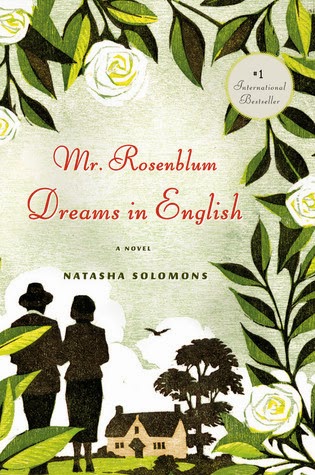 After finishing The Fault in Our Stars, I started on this novel and found another good story!  Jack Rosenblum, his wife, Sadie, and baby daughter, Elizabeth, are fortunate to be able to leave Germany and immigrate to England before the outbreak of WW2.  Jack is anxious to become a proper English man. When he is given a booklet instructing him on English Behavior, he strives to meet every goal. Jack accomplishes much in his early years in England. He learns to speak the language, he becomes a wealthy businessman but his life is not complete. Every Englishman plays golf.  As Jack sets out to learn more about the game, he begins filling out applications to join several Golfing Clubs in his area. However, he finds that his last name is keeping him from being accepted to any of the clubs no matter how wealthy he is and how much money he can donate to the clubs. Not to be deterred from his goal, Jack decides to build his own golf club in rural England. Jack is in his early 50s now, a daughter at Cambridge and this golf club will allow him to finish his goal to be a true Englishman. Without telling Sadie, he sells their London home and buys a large acreage with a decrepit house in the countryside. All does not go smoothly! Jack finds out that building a golf course is a big job. The village people are leery of outsiders coming in to take over their land. And finally, Sadie is not really on board with this whole scheme. Through a series of unfortunate events, Jack hits rock bottom but this is his salvation. Things begin to change and Jack learns that his family and new found friends are what makes life worth living.

If you are an Anglophile or a golf enthusiast, I think you will enjoy this charming story.
Posted by Arlene @Nanaland at 6:51 AM

Well, I am neither, but it does sound like a great book! Thanks for the recommendation!

It sounds great. Thanks!

Arlene, what a sweet book! My dad loved playing golf and I always enjoyed caddying for him.

Good Morning Ladies!! Two good books in one week is a record for me!! It was a very sweet story without a lot of the violence and craziness in most modern novels. Gina, If you caddied, then you would really enjoy this book. i really know nothing about golf but I enjoyed it thoroughly.