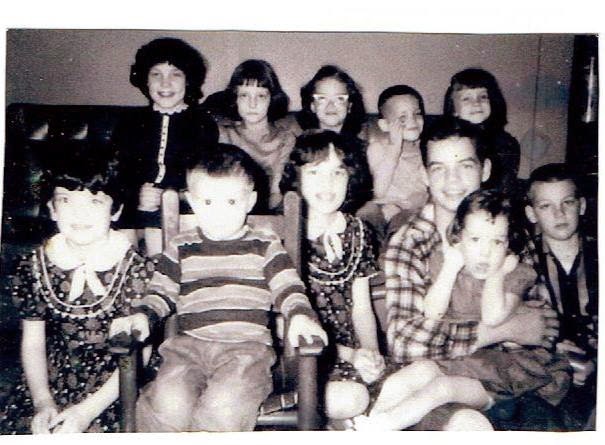 Cousins are your first best friends as the saying goes!  This is a picture of me with all my Tankersley first cousins. I am in the middle, right behind the rocking chair! I think it was made around 1962 or 1963. My oldest cousin, Brenda, is not in this photograph, she probably did not want a picture with all the babies.lol.  Anyway...on the front row is my sister, Kristi, my cousin Kevin, me, Brent who is holding my baby sister, Leta and at the end of the row is Steve. The cousins on the sofa are Carolyn, Kathy, Pam, Dwayne and Charlotte.

Last Tuesday my cousin, Pam, went home to be with the Lord after a courageous battle with colon cancer.  As you can see in this picture, she was rocking those cat eye glasses that she wore from a very young age. A friend commented, Heaven is a little sweeter and a little fancier with Pam there.  As I look at this picture it is hard to believe that all three girls sitting on the left on the sofa have gone on to heaven. Carolyn died of complications from Lupus. Kathy died suddenly after having many health issues and now Pam is gone as well.  All three left children and grandchildren who miss them so much. Christmas will be hard for the extended Hooper clan this year.

My sister shared  with me that Pam had kept a journal and a portion of that journal was read at her funeral. This entry was written just after she received the report that there was nothing more that could be done for her medically. She stated that while she looked forward to heaven, it is hard to leave her family behind. She hoped that she had lived the kind of life that made a difference and that had made her parents and grandparents proud of her.  We all know she made a difference. When Carolyn died, Pam stepped into the role of second mother. Carolyn's children called her Mama Pam.  Someone laughed that they always knew when Pam was around because all the little ones had red lipstick kisses on their cheeks! She dearly loved her two grandsons as well as all her great nieces and nephews. Always a fashion plate, her high heels and red lipstick were everyday attire. Some of the ladies she worked with sent a floral tribute that was shaped into a red high heel with a perky black bow on it!

Pam was my closest cousin in age and in friendship. We married around the same time, had our children together and just assumed that we would both be here until we were little old ladies. She will be missed but never forgotten.
Posted by Arlene @Nanaland at 11:16 AM

I am sorry for your family's loss, Arlene. It looks like you have great family memories.

We do Amy...just sad to see my generation facing the effects of time.

I'm so very sorry for your loss. My cousin is my best friend so I know what a loss it would be. I'll keep your family in my prayers! Sweet hugs, Diane

I am so sorry for your loss. Pam was a special person, from your tribute to her! Cousins are special in my life, too. They really are our first real friends. Colon cancer is not an easy battle. It took both my mom and my younger brother. We need a cure! Hugs and love!