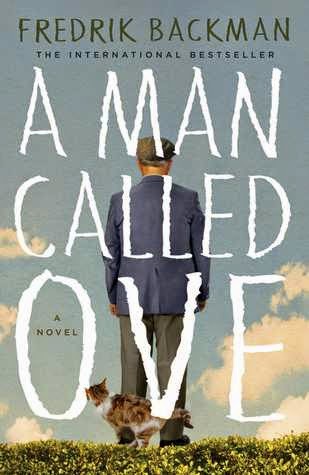 A Man Called Ove is a book that captured my heart. The book opens as Ove, is pondering his life without a job to go to every day. He is 59 years old and he feels he is useless. His beloved wife, Sonja, passed away six months ago and as Ove tells it, he stopped living when Sonja died.  Ove is quite the curmudgeon. He has lived in the same neighborhood for 30 years but his life revolved around Sonja and his work so he has had no time for real relationships. Feeling that he would be better off with Sonja, he begins to plan his death. Orderly in all his habits, Ove cannot accomplish that task until his house is tidy, he has his affairs in order and his good suit is clean. None of Ove's attempts at suicide come to fruition because just as he plans his demise, someone rings the doorbell needing help of one kind or another. And Ove, though aggravated, does his duty in giving assistance.  His new neighbors, Parvanesh, Patrick and their two little girls seem to be very needy. Ove does not understand young people who are clueless about driving a car with a trailer attached, unable to do the simplest of home repairs and will not follow the rules that are clearly posted in the subdivision. The Reader is allowed to come to know Ove through flashbacks of his youth and his early life with Sonja. These glimpses of his past life help the reader to see Ove in a new light.

I laughed out loud at some of the passages in this book and I shed a few tears at some of the revelations of the trials Ove endured in his young life.  Normally I do not like books set in another country...this one being Sweden, but the story transcends the locale.  If any of you are Britcom fans as I am, I pictured the actor, Geoffrey Palmer, as Ove. ( I do not know about all readers but I have to have a picture of the characters in my head to enjoy a book!) Geoffrey Palmer played Lionel Hardcastle in As Time Goes By and he is the perfect lovable curmudgeon in my opinion.

This is a book that I plan to purchase for my own personal library as I would like to read it again. It was my first five star book on Good Reads for 2015. And I will look forward to reading any new books by Mr Backman, who is a Swedish Blogger!
Posted by Arlene @Nanaland at 7:09 AM

I always enjoy your reviews!

I do the same thing when I'm reading, Arlene! As I learn about the character, a picture of them forms in my mind. Now that you've mentioned Geoffrey Palmer, I'm more interested in reading the book. :-) BTW, I think you would like George Gently. He is on Netflix, if that helps. :-) Tonight I'm watching an old Agatha Christie, 'Death on the Nile' with Peter Ustinov and just about every other major actor of the time, it seems!

This sounds like a delightful book. Yeah, cause I have a $30 Amazon gift card!

Thank you Terri!! And I will be checking out Mr Gently!! Tori, I really enjoyed this book, some of the characters were off beat but the message of the story was good! It really made me stop and think about how important character is and what a lack of it we see in our world today.

I'll put this on my reading list. I know I would love it too! Hugs!

This sounds so sad! Maybe it is a sunny summer book to read.