Valentines Day is over, cards will be put away today, candy hidden from grands and decorations taken down. But if you are looking for an interesting read, I have one for you. 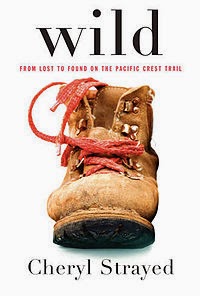 Wild is the story of a young woman who felt life had let her down and she had lost her way.  After the death of her mother, Cheryl's extended family fell apart and she reacted to this by acting out, divorcing her husband and trying to lose herself in drugs.  Fortunately she came to her senses and decided that a long walk might do her good. So with no hiking experience, Cheryl decides to hike the Pacific Crest Trail which runs along the western coast of the US from Mexico to Canada. It is sometimes called the sister of the Appalachian Trail.  Cheryl reads guide books about the trail. She mails packages to stops along the way. ( There are post offices on the trail at various points just for the purpose of re stocking food and necessities.) She buys a pair of hiking boots, but neglects to break them in. She has a pack that  is of back breaking weight.  Nothing deters Cheryl as she sets off on her trek. She starts in California and plans to hike to the Columbia River in Oregon.

As you hike along with Cheryl, you come to realize what a hard task she has set for herself. She often camps alone in the wilderness. She comes upon rattlesnakes, deer and bears. Like most people who trek for miles, feet become the biggest issue and concern. Cheryl dealt with blisters, aching feet and hiking boots that she finds are too small for her feet. But there are no shoe stores on the trail. Fortunately she is able to have a pair of new boots mailed to her on the trail. Thanks to REI. Her food, while nourishing, becomes boring and tasteless. When she comes upon places where she can get hot food, she finds herself wolfing it down like a starving person.  Hot showers are few and far between on the trail so she gets used to being dirty and smelly.  And don't even think about the trials of finding and keeping water to drink!  Cheryl does come upon other hikers who are very helpful to her. One 60 year old former Eagle Scout helps her lighten her backpack. Citizens of the small towns along the trail, often invite her to come in for a shower and a hot meal.  Cheryl is quite the star of the PCT during her hike as it is seldom that a woman hikes the trail alone. Most hikers prefer to hike with friends for companionship and help in case of sickness or injury.  In her independent fashion Cheryl finds that solitary times on trail allow for reflection of the past and plans for the future.

This book is being made into a movie starring Reese Witherspoon and I hope to see it when it is released.  I have always been fans of "hiking" books. It began with Peter Jenkin's best seller, Walk Across America, that I read many years ago and more recently I have been enjoying stories of the pilgrims who hike The Way( Camino de Santiago). The Way is a religious pilgrimage known from the middle ages and the trail runs from France to Italy. If you have not seen the movie, The Way, starring Martin Sheen, I highly recommend it.  I admire anyone who can discipline mind and body for such a journey. I am sure I would make it about an hour before giving up!

Well old man Winter has returned to Alabama this week so no walking journeys for me this week. I will be sitting in front of the fire with a good book!

Well, this sounds like a good one! I'll have to check it out, on Amazon. Thanks for the review!

The movie has been released and Reese Witherspoon is up for an Academy Award for her performance.

Terri, parts of the book are pretty gritty but it is her story and it helps you see her struggles. Chris thanks for stopping by! I will be on the lookout! So far it has not made it to our little town. And I want to see Still Alice with Julianne Moore and it has nit been here either. Sometimes it would be nice to live in a bigger town!

Sounds like an interesting read, Arlene. I think I'd like to see Reese Witherspoon in it too.

I really loved this book too and can't wait to see the movie! Sweet hugs, Diane

wish we could all go and see the movie together!!