In addition to the Old Brick Church Community we spent some time is downtown Lynnville. 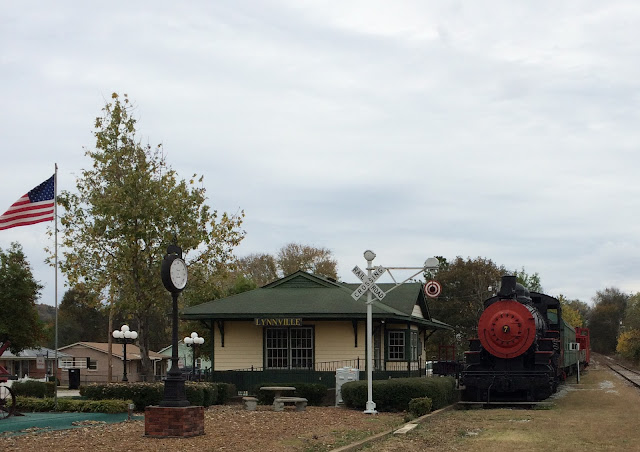 Like many small Southern towns, the railroad was its life's blood until the interstates took over!  Downtown Lynnville is two streets but it is a cute little town and the residents are trying to revitalize the area. 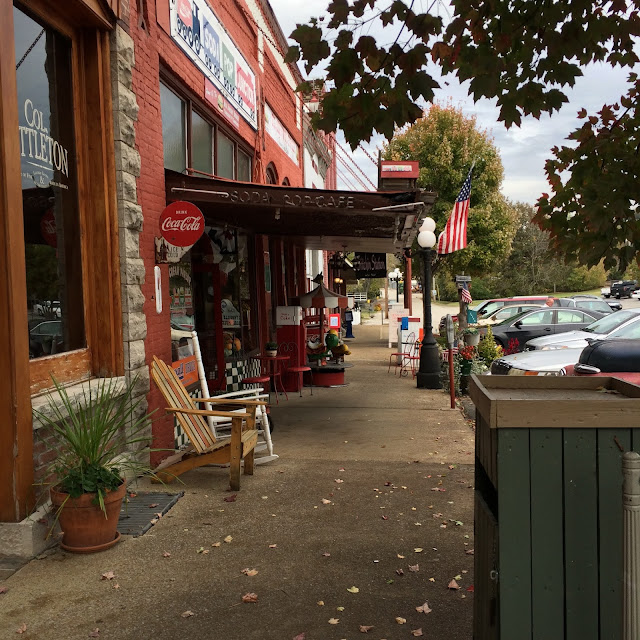 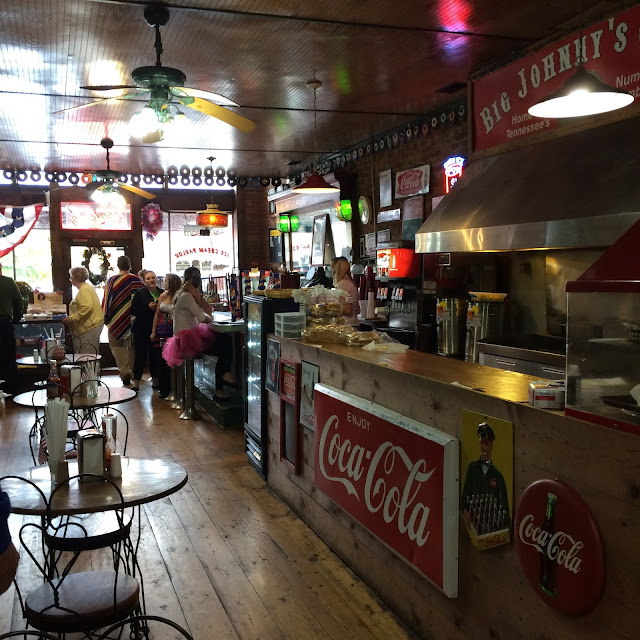 Soda Pop Junction is a cute eatery in what was the old drug store. Don't you love those old oak floors! As you can see, several people were sitting at the counter for lunch and others were seated at booths and tables. We grabbed a snack there...a fried apple pie and i must say it was pretty good. Not as good as my mother's but it was above average. 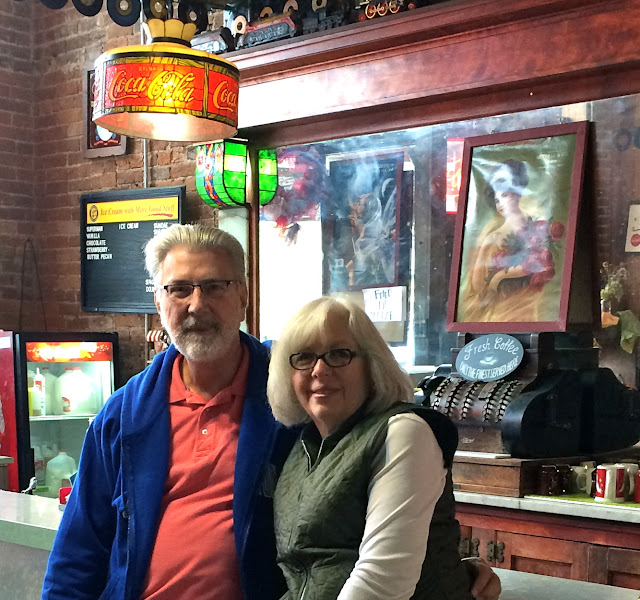 Sharon snapped our photo at the counter. 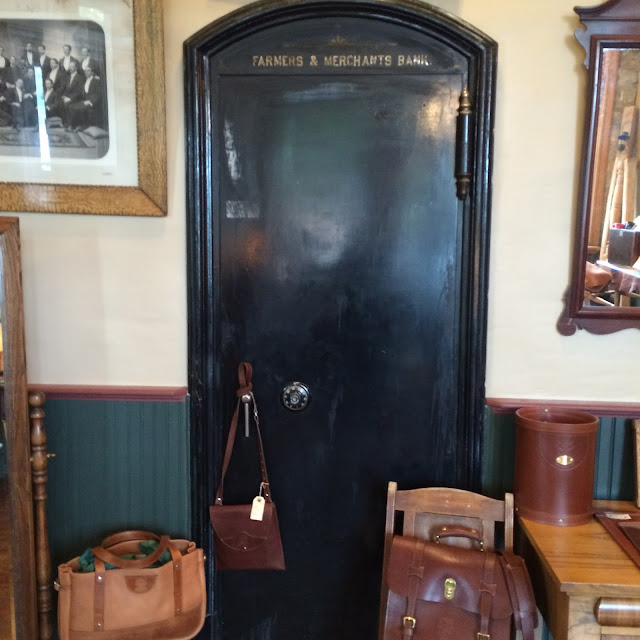 Next door to Soda Pop Junction was a fine leather goods shop owned and operated by Colonel Littleton. You may have guessed that this shop used to be the bank.... see that big old vault. 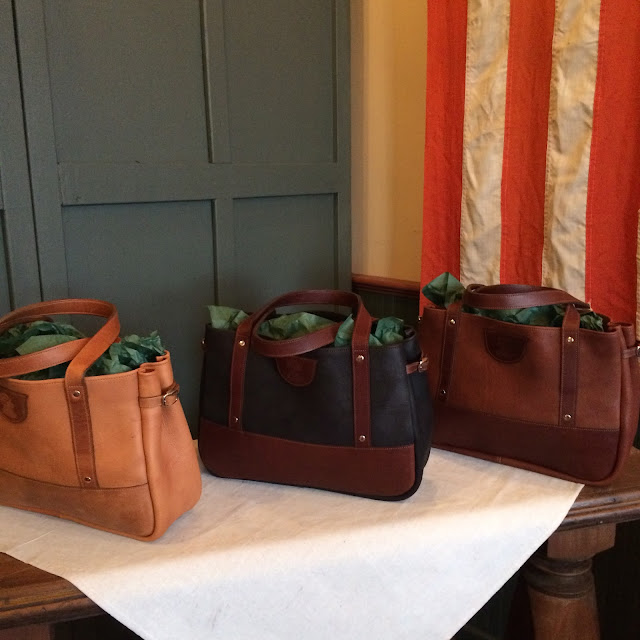 Being a purse lover I had to get a shot of these handmade leather purses. Colonel Littleton had on display photographs of several Nashville celebrities who had purchased his wares. One of them was Dave Ramsay. As I said to my friend, Sharon, "it is hard to pay this much for a purse with Dave Ramsay staring at you!!" For those of you who are not familiar with Dave Ramsay he is a conservative financial advisor. 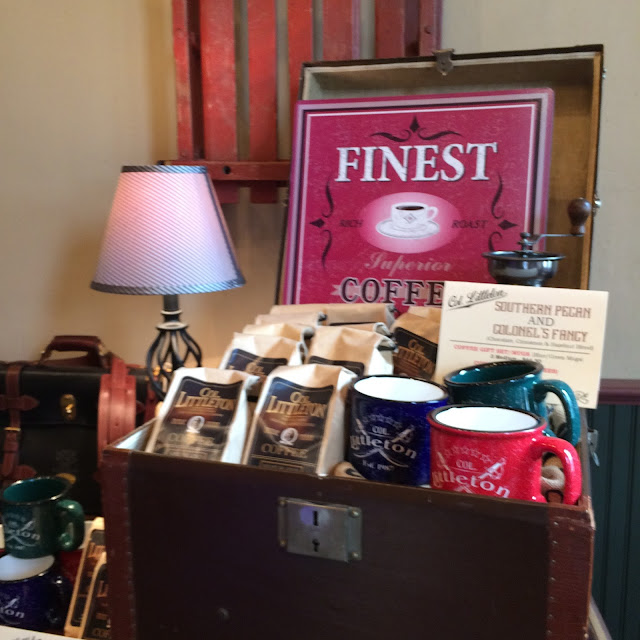 Coffee is also sold there. Colonel Littleton has purchased several of the buildings on Main Street and is hoping to see this little town come back to life. 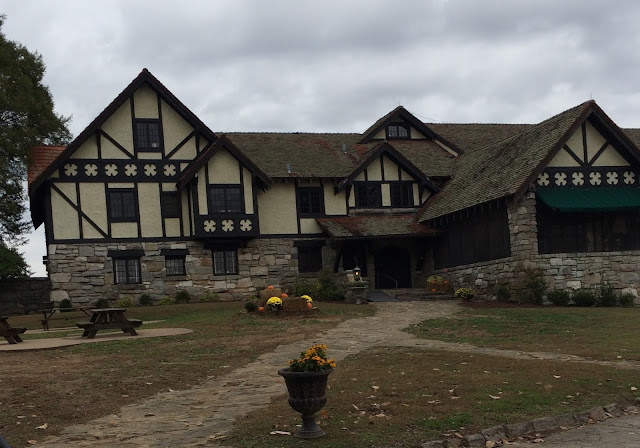 Before we headed to lunch in Pulaski, Tennessee, we drove by Milky Way Farm.  This is a property that was owned by the Candy Man himself, Frank Mars. He bought the land in the early 1930s and built this beautiful home.  He was responsible for providing jobs to many local men and women during the depression. The Mars family raised beef cattle there and were well known for the beautiful barns for their thoroughbred horses. In fact, a Kentucky Derby winner was trained at this farm. If you are interested in learning more about the Milky Way Farm, here is a wonderful web site that will tell you all about it.www.milkywayfarm.org 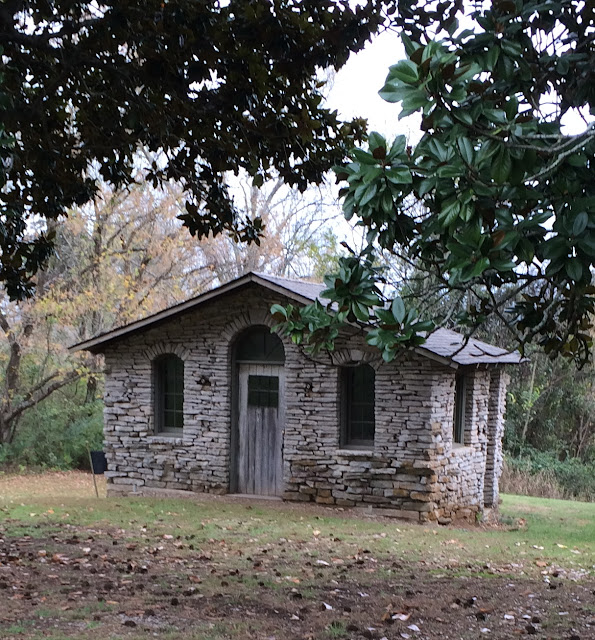 This cute little building is actually a Wash House for the horses! Before they went to races or horse shows the horses got a bath here!  Probably a better house than many area people lived in at the time.

We ended our trip with a late lunch at Legends Restaurant in Pulaski, Tennessee.  Then we headed home so the men could catch a few football games!  It was a fun weekend and we are already making plans to visit Milky Way Farm when it is open to visitors.
Posted by Arlene @Nanaland at 7:51 AM

Oh my goodness, I love Soda Pop Junction!!! What a fun place to visit. And of course I love the depot. I've always loved trains and train depots. There was a gorgeous, renovated train depot in Ashland, WI that we visited. Amazing. And shortly after it burned to the ground. Very sad!

Have a wonderful day.

I loved Soda Pop Junction and I plan to return to eat a real old fashioned drug store meal there!

What a great little town! I love small towns like that one. I would love to tour that house! It looks gorgeous!

Heather it is a cute little town..looking forward to going back!

What a fun time you had. It is always good to spend time visiting places you have never been, and maybe always wanted to. Thanks for sharing with us.

Linda I love visiting new places even when they are not too far away!

What a wonderful trip!! I really love doing things like that and will look forward to seeing your photos when you get back to the Milky Way Farm. Very interesting!!

I'm jealous! This looks like a day I would enjoy. Thanks for sharing!

Terri and Mari...it was a sweet day. Love spending time with Sharon and Barry.

It certainly does sound like a fun time out. Love the 'small town' shots.

How fun!! I love it all. Looks like my ideal place to visit. Thanks for taking us along with you!

What sweet little diner. Love the floors! Those purses are handmade! Wow!

Gina, you cannot find that kind of wood anymore...or if you could it would sure be pricy. It reminds me of the old days when the drug store had a lunch counter. I loved going to our drug store for ice cream.