Thank YOU For Your Service 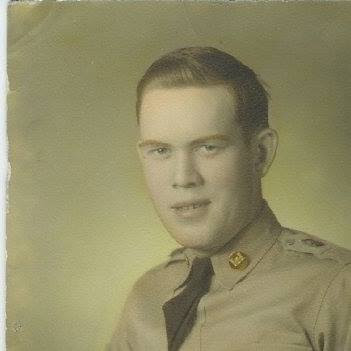 I love this picture of my daddy, taken when he served in the US Army Seashorses during the Korean Conflict. He was stationed at Camp McGill in Japan and his unit served on the boats that took men and supplies from Japan to Korea. One day we were talking about his time there and Daddy said that the hardest thing was watching the soldiers get off the boat, going to combat. He made many good friends during his time in the service and he was so glad to be able to attend the Seahorse Reunions in his latter years.

And my mother's family the Hendersons have a long line of veterans as well. 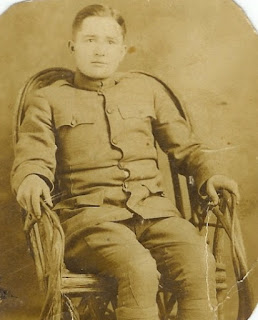 Here is my Uncle Webb who was a cook in the Army during WW1.  I loved my "Uncle" as we called him. And he was the only man I knew who could cook! That gift came in handy as his wife was an invalid as she got older and he was left a widower. I can remember watching him make corn bread! Uncle was my Granddad's oldest brother and was like a second grandfather to me and my sisters. 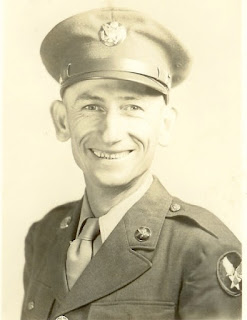 My Uncle Edd served in WW2. He was my Granddad's twin brother. My mother tells the story that as a young girl she was so worried her daddy would have to go to war. And if the war had not ended when it did, Granddad would have been in the next call up. 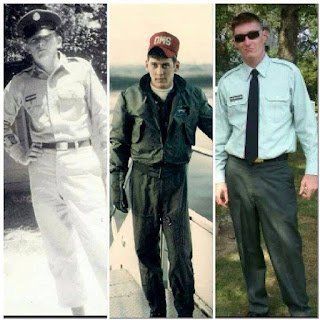 And I could not end this post without a picture of my Father in Law... 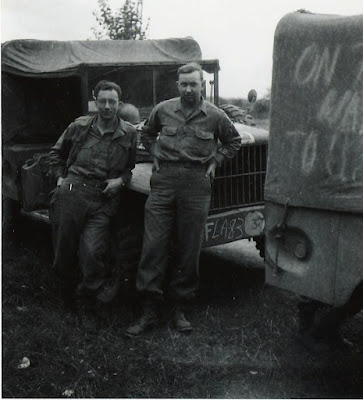 He is on the right and if you cannot read the writing on the truck in front of him, it says, "On the Way to the USA". Papa did not tell us many stories about WW2. As most men of that time, they felt they did their duty and they were not heroes.  Papa, being of German descent, was always under the scrutiny of his fellow soldiers. Some suspected him of having German leanings as he could speak German. But Papa was a fiercely loyal American as they would find out.  Papa's unit went into Europe at Normandy about 10 days after the initial invasion. Papa told us of the French people cheering and the ladies kissing them as they entered the cities. He also fought in the Battle of the Bulge and helped liberate one of the death camps in Germany.  So he is my hero...though he would tell you that he was just doing his job.  None of his sons served in the armed forces but grandson, Will, has followed in his footsteps.

Kendall was telling me about their school program yesterday and she wanted to know how many veterans were in our family. I was happy to be able to share the stories of her heritage and to remember some wonderful men at the same time.
Posted by Arlene @Nanaland at 7:55 AM

They were all so young, and the part about the French cheering for them brought tears to my eyes! Thanks for sharing these memories, and Happy Veteran's Day to you!

They were Leslie Anne. Another story that Papa told was of driving a truck and he got lost and came upon two SS soldiers. He was able to take them prisoner because he spoke German. They were starving and he promised that they would get food. One of the soldiers told him, We are enemies but we are also human beings. I am so glad Papa lived to tell us his stories.

Such fine handsome men. They each had a part in making all our lives better. thank you!

Awesome story. They were so wonderful as all of the current ones. My dad was in the Army and would have been in Vietnam at the worst possible time if he had not died of cancer. My hubby's dad went in on the second day of the Normandy invasion. My hubby's dream trip out there one day is to go and follow the trail his dad's unit traveled. We have places set in our family room to honor both men. And many more family members as well. For my current small group (aka Sunday School) study, one of the guys is a veteran of both Gulf Wars and is leading a study on the Christian's viewpoint of war that I found. It has been incredible and really made us think. We are headed to his home tonight instead of the usual our home for dinner and Bible study.

Thank you Gina and Sandy...it surely seems as if our ancestors were made of sterner stuff!! Sandy we have wanted to do the same trip. We have always wanted to go to Germany to see Marvin's roots. We know that their family is from Ruppersdorf.

Thank you to all of these family members/Veterans. I enjoyed your photos very much. Kendall is fortunate to have you to share this with her.

A wonderful tribute to your brave family members, Arlene. God bless them for their service!! Heros all.

What a great history of brave men in your family. My Dad, FIL, son and many uncles are also veterans. One uncle was the only man in his battalion to survive the battle of the bulge. He's still living - 93 years old!
We owe these men so much!

Mildred, I think it is so important to pass down family history. So many people these days are too busy to pause and reflect. Thank you Terri. I enjoyed looking at these sweet faces and remembering. Mari, Papa told us about The Battle of the Bulge and how they had to dig fox holes and get down in them as fast as they could. I am glad your uncle survived that battle. Please thank him for his service for me! 93! God Bless HIm.