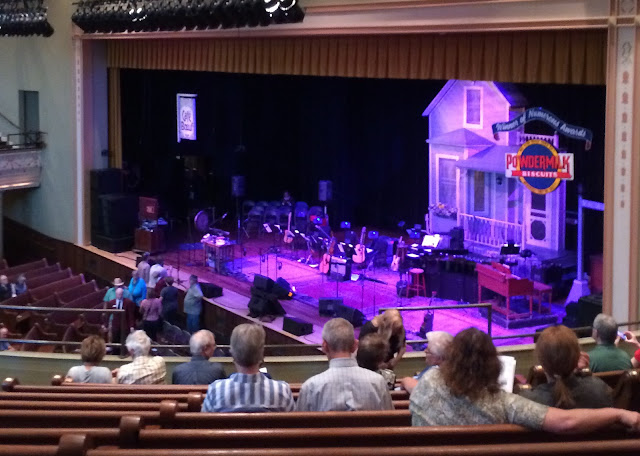 On Saturday afternoon we made our way to Nashville's historic Ryman Auditorium, home of the Grand Ole Opry, to say farewell to a man who has entertained us for years with his story telling and songs.  We were there early and so were many others. As you can see from this photograph, you sit on church pews. And they are not any softer than the pews you sit on for an hour or so at church!  You better like the people you sit next to because you are up close and personal with them. The couple sitting next to us had journeyed from Chicago to see the show because they can never get tickets to his Chicago shows.  We did see several people we knew there, Garrison has many fans in Decatur, Alabama. 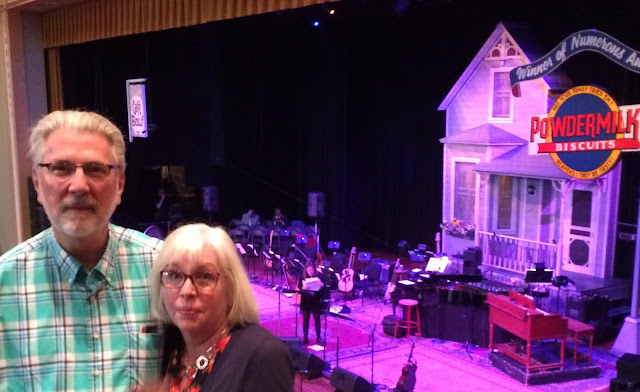 Pardon the silly look on my face. I was not ready for my photo!lol...But thank you to the kind man who snapped our picture in front of the Powdermilk Biscuit Sign.

What a wonderful evening it was. The audience was aware that it was a historic night at the Ryman and I think Mr Keillor felt the love. And Brad Paisley was in attendance. He never lets you down, what an entertainer he is. I have tried to get tickets for one of his concerts but he is not in our area any time soon.  He sang a new song that had us all rolling in the floor laughing...the title was The Internet is Forever. He goes on to sing about many people taking inappropriate selfies with a refrain, "you ought to be ashamed....of your selfie!"  He told us in song if we were at the Grand Canyon or if we met Ringo Starr then a selfie would be ok!!

And before we knew it, we were outside waiting for our car to be brought round by the guys in valet parking. We have found that the price is right and it is much easier to just park by the Ryman, so that is a hint if you ever go there for a show.  While I was gazing at the downtown area, Marvin told me, " Here comes Brad Paisley!!" 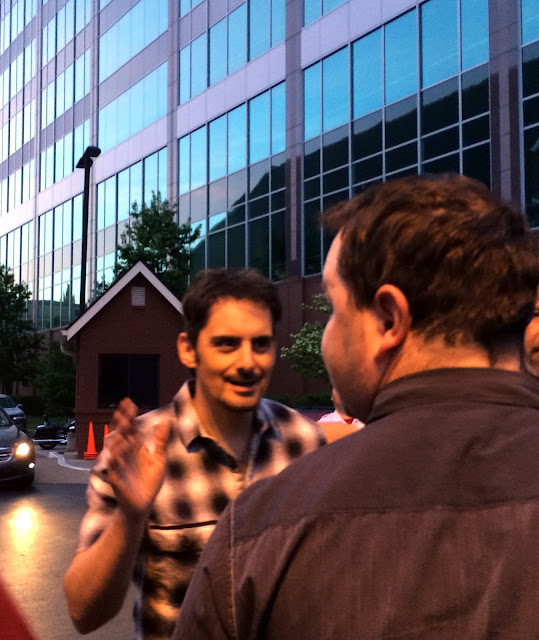 And sure enough, there he was. He stopped to sign a few autographs and to get a few pictures. He called God Bless to the crowd as he made his way to the bus. 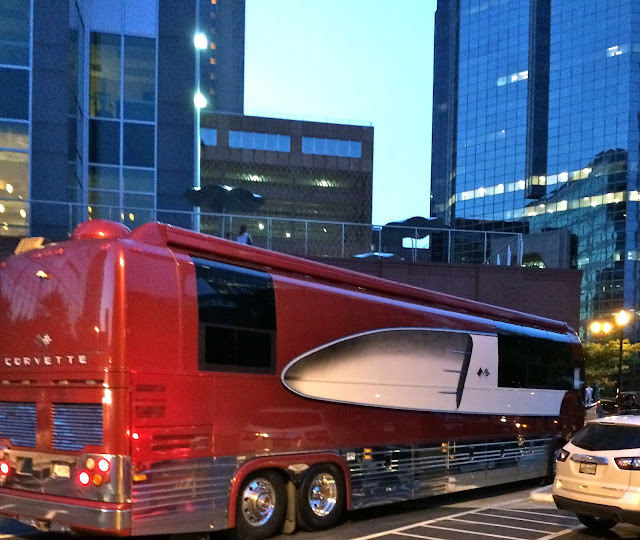 Soon he was on board and his guitars were tossed casually into the hold. Marvin and I were surprised at that...hey take care of Brad's guitars you handlers!!

A night for the books and memories that we will enjoy chatting over in years to come. It was good knowing you Garrison Keillor!!
Posted by Arlene @Nanaland at 6:50 AM

What a fun night and Brad Paisley was a super surprise!

Sounds like a great night! I do love Brad Paisley!

Arlene, what fun! We drove through Nashville once years ago. Exciting town!

Thanks for sharing such a special evening with us!! Wow to that bus! I would love to see the inside! So glad you had such a good time.

Thanks friends...Marvin said he felt a little sad at the end of the program knowing it is one of the last PHC shows. I believe they return to Minneapolis to finish out the season. Live goes on. I hope Mr Thile has good success as he takes over as host.

What a fun night! Seeing Brad Paisley was an added benefit.

A big night. The last performances are always to be remembered. It was an "I was there" occasion.

It is good to get out and have a "date" night! And seeing Brad up close did make it special.