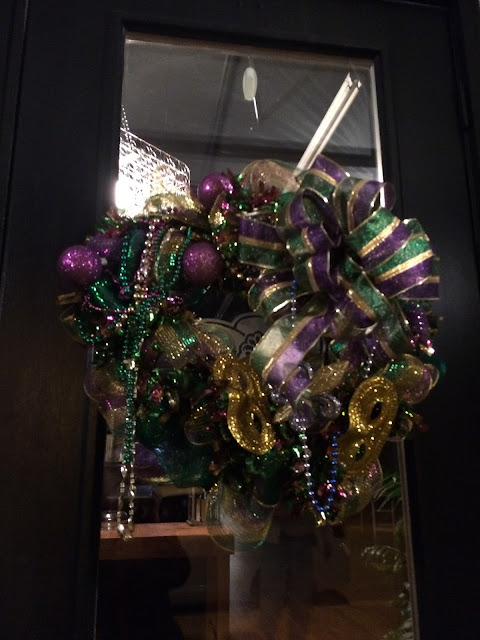 Let the Good Times Roll! Mardi Gras Season is here in the River City.  I spotted this beautiful wreath on the door of a local business. Green, Purple and Gold are the colors of Mardi Gras.

Actually Mardi Gras was first celebrated here in America in Mobile in 1703.  It fell out of favor until after the Civil War when it was revived to bring back good times after the deprivation of war.  The Mardi Gras Season begins on Epiphany...January 6th also known as King's Day.  The Good Times come to an end on Fat Tuesday which is February 28th this year.  Right now all the Crewes are raising money for their festivities at the end of the season. Parades and parties mark the end of Mardi Gras as Lent begins on Ash Wednesday which is March 1st this year.

Our Mardi Gras parade here in Decatur is very family friendly....beads and candy with out all the craziness that you find in New Orleans. 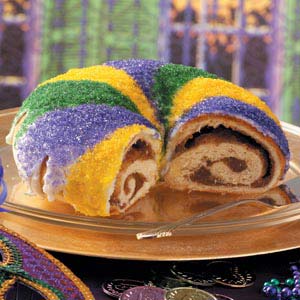 And what would Mardi Gras be without King Cakes? Marvin says several of his co workers have brought in the delicious cakes decorated in the colors of Mardi Gras. Marvin did not get the piece with the baby in it. A sign of luck and prosperity, if you find the baby in the king cake, you have to purchase the king cake next year!!

I have never decorated for Mardi Gras, but I do keep up with the goings on being so near to Mobile. Maybe I will this year. I actually can't wait to put up my February cottage tomorrow. January is my least favorite.

The wreath is beautiful!

I would have fun at your parade! Hugs!

That is a beautiful Mardi Gras wreath! Joe and I love New Orleans but we would never go there during Mardi Gras! Our church, however, has a Mardi Gras carnival and we also have King Cakes. A fun time!!

Arlene, I know next to nothing about Mardi Gras. I know about Fat Tuesday and that's it. Love the colors though!

The only things I know about Mardi Gras is what I've seen on films and television and it all looks too much for me, so it was nice to hear your take on it. I love the colours though, they look so festive on your wreath.