Did you know that July 19, 2017 was a historic day? It was the 325th anniversary of the first hanging in the Salem Witch Trials.  To honor the women who were put to death, there is a Stitch Along Called Salem Not Forgotten online.  I joined it as I have always been interested in that era and the hysteria that led to the death of innocent women.  Here is the piece I am stitching... 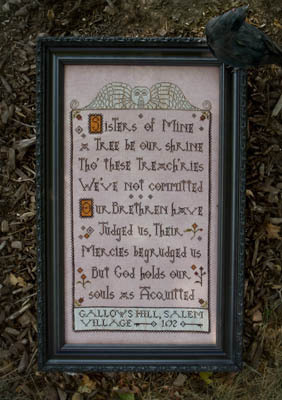 While this is stitched on 40 count linen...I am changing the fabric to 28 count linen as my old eyes cannot stitch on 40 count, even with my magnifier.  The designer for this piece is Plum Street Samplers.

Here is my start. 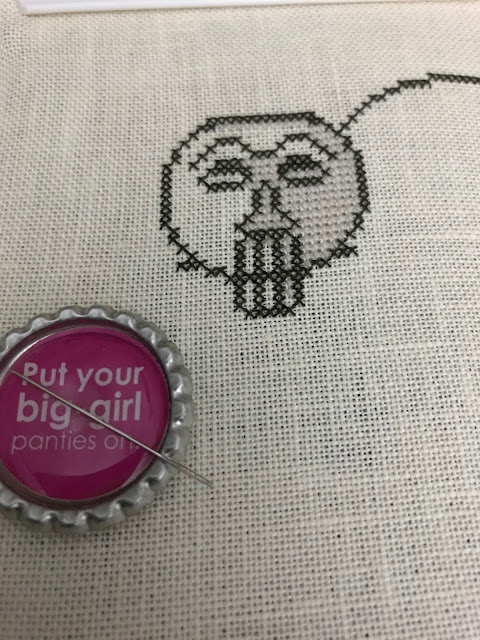 I thought the needle minder was appropriate.  Those poor ladies...

Here is another pattern I like as well.   It is designed by Little House Needleworks. 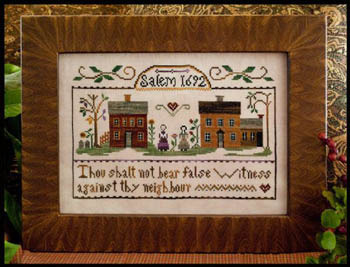 I did see some news articles featuring memorials to these women this week...so they are not forgotten.  It was a  certainly a sad time in American History.  I recently read a book about Nathaniel Hawthorne and it stated that his name had been Hathorn but he changed it because one of his relatives was a judge in the witch trials and Nathaniel did not want to be associated with him.  I guess the w and and the e  would disquise him. :)

I am also working on a primitive for fall...it is a Stacy Nash design. 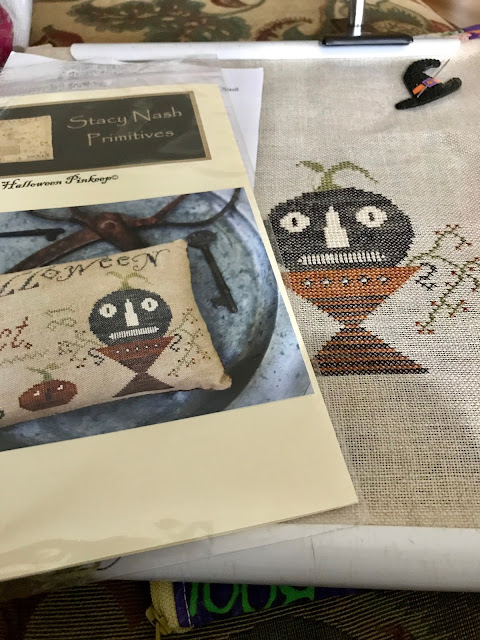 I think it is so cute.

This weekend I am focusing on a finish. I hope to complete my Prairie Schooler Village that I have been working on.  I will be like the Little Engine that Could...I think I can , I think I can.  Because when you finish one piece, you get to start another!
Posted by Arlene @Nanaland at 6:00 AM

I always enjoy your Saturday updates on your cross stitching. Hope you both enjoy the weekend.

Arlene, another very interesting post. I have a friend that is Halloween obsessed and has gone to Salem several years at Halloween. I'm going to have to ask her if she knew that about Nathanial Hawthorne. Your Stacy NAsh design is adorable! I went to the library and took out The Way, hope to watch it tonight. Thanks for the recommendation. Enjoy your weekend. Mary

Love your Saturday Stitching. I have to do an update soon too. I got a little sidetracked this week, so not nearly as much stitching as I would like:(

I always love your stitching!! It was a very sad time in our history. . .as great as this country is we do have some skeletons in our closet!

What super pieces your are working on! I really like that needle minder. Where did you find it? Will be keeping my fingers crossed on your Village finish. Yes, you can do it! Enjoy the rest of your weekend!

Robin, thanks for stopping by. Actually that needle minder is a magnet I picked up somewhere. I cannot remember the place but I often use small fridge magnets as needleminders. I just need to find more of the small magnets that secure it to the back of the piece. I have heard Home Depot carries them.

I love seeing your projects and reading your enthusiastic descriptions! The Salem witches period is a strange one in our history. Always interesting to hear more about it.

I love love love your needle minder. Adorable! You've stitched so many holidays. Do you have a plan for next year's stitching?

Thanks Ladies!! Gina, I do have the first six months of next year planned out, believe it or not. Now that I have my little sewing machine, I can finish more pieces on my own.

I find that era interesting too. We visited Salem about 30 years ago and enjoyed it.
Love your stitching!

I am always so impressed by your dedication to stitchery. It's always beautiful, but those itty bitty stitches! Yikes! Your perseverance pays off, that's for sure! I like the new patterns.

You have some very cute stitchings in the works, Arlene! Love the little Stacy Nash black pumpkin so much! The look on the littler pumpkins face is priceless :)

Good luck with the PS finish--can't wait to see it!