An Evening with Home Free

For one of our Christmas gifts this year we got tickets to see Home Free at the Von Braun Civic Center in Huntsville. And yes our Civic Center is named after Werner Von Braun. He was kind of a big deal here in Huntsville when he and his German scientists arrived to help the US win the Space Race.  Mr Von Braun would be very surprised to see how Huntsville has grown from a little cotton town to a center of technology in our country.

Enough bragging on NoAla... We dressed up and hit the road to Huntspatch. 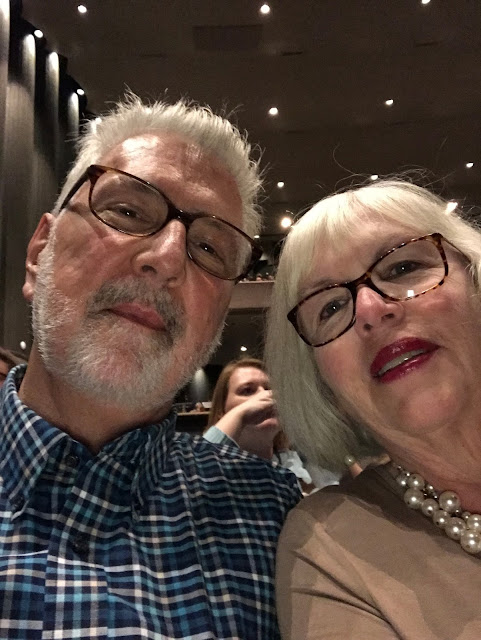 And we thoroughly enjoyed the show. 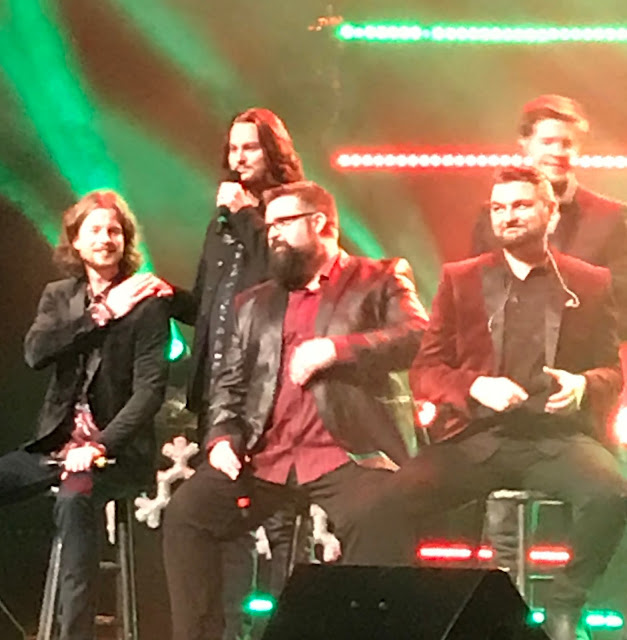 These fellas put on a great sow.  The young man on the right front is from Bay Minette, Alabama.  I love Bay Minette because that is where we stop for a late lunch of fried shrimp at the Shrimp Basket when we travel to Gulf Shores.

I do have some observations about our evening. If Leslie Anne Tarabella had been there she could have written a whole column about what NOT to do when you go to a concert.  I will add my own stream of consciousness.

1 Apparently Home Free has a lot of BIG fans.  And I mean big as in Large. I struggle with my weight so I am not going to act like I am a skinny minnie but when you spread out of your seat and into mine...I have a problem. When we got to our seats( In the 3rd row!!) I saw that a large lady was sitting in the seat next to us so I took the seat next to her, hoping to save my sweet husband but wouldn't you know it, an even larger lady sat next to him.   I had an eye opening experience when we attended a concert at the Ryman Auditorium in Nashville several years ago. The Grand Ole Opry seats are church benches..or pews for you fancy folk. There is a number on a metal tag that indicates your seat. Well people back then were much smaller than modern fans. I told Marvin that you can tell no one works out in the field all day and has never heard of fast food. Back in my grandparents day, fast food was cornbread crumbled up in buttermilk. My granddad ate that for supper many a night! The seats at the VBCC are a nice comfortable size for most folks, but some of those seats must have breathed a sigh of relief at the end of the concert.

2. Cell phones at concerts...are we going to have to confiscate them? Almost every person there had out their cell phone, taking pictures and even filming the concert. I am a rule follower...if they tell me not to take any video, I am not going to film anything. I am an old fashioned girl who wants to enjoy her show without having a cell phone in my hand. They did pose on stage one time and told us all we were free to take their photo. The above photo was taken then.   At best it is distracting and at worst it is taking Home Free's performance without their permission.

3. Marvin and I were over dressed. I was under the impression this was date night and a special Christmas treat so I dressed accordingly. Not everyone got the memo. Men were there with hats on that they kept on through out the performance. One man was wearing a HUGE cowboy hat..it must have been 20 gallons instead of 10!  And right in front of us was Onslow from Keeping Up Appearances. If you watch that Britcom you will know I am talking about Hyacinth's lovable but disheveled brother in law who never wears a shirt, just a wife beater and a sweater vest.  Marvin and I had to chuckle about that one. At least he did not talk and take photos during the show.

4. When my children were young, we did not have the money to take them to concerts so I was surprised to see so many young children in the audience. Home Free is a pretty wholesome show so that is not my beef with the parents. There was a five year old boy sitting beside the large woman sitting next to Marvin. He talked a lot during the program and Mom spent her whole evening trying to keep him entertained.  Please make sure your child is old enough to attend a two hour concert...I am sure this young man was up WAY past his bedtime.

Of course now you think Nana is a crabby old woman!! In spite of all the distractions, we had a good time. The concert was a sell out and everyone was excited to be there so the guys in Home Free really outdid themselves performing for the audience. But there are some days when I would like to see us all return to kinder gentler times when refinement and manners were practiced consistently.( and if you did not act accordingly, your Mama would give you a dressing down that you would never forget...a hickory switch might or might not have been involved!).  If you ever have a chance to see Home Free in person, I give them a big Thumbs up!!
Posted by Arlene @Nanaland at 6:00 AM

I had to chuckle at this post. I am so in agreement with you. I wish people would take a little more effort in their appearance and manners. The parents might try my small wooden spoon that I kept in my purse as a reminder to Paul Allen when he got out of line. Actually, it was in my purse for the grocery store. That was his place to beg.
We could all back up from the table, but you are so right at some of the extra large folks. I feel for the chairs!!!
I finished my first stitch right before the Auburn bowl game yesterday...my to do list.

That's so interesting and I'm sure I would have felt the same way with what you put up with at the concert. I've always wanted to go to a Cowboy football game but when I look at the fans....I know I wouldn't enjoy it. I love the game and would have a problem with people and the NOISE! I don't consider myself old but I wonder why people...young and old....don't have better manners! Happy New year!

Arlene, I don't think you are an old, crabby lady. I must live in a cave as I haven't heard of this group (will check them out when I finish my comment). I can't say that I am surprised about the lack of manners; it seems to be more common during this day and age.

I feel the same as you, Arlene, when it comes to being considerate of those around us...whether it be at home or out in public. I'm glad that you and your hubby had a nice evening out and were able to enjoy the concert in spite of all that was going on around you.

Glad you didn’t let anything spoil your good evening! Manners! Wish we had more!
Simply being kind and thinking of others = manners. As grandparents, we set good examples for our grandchildren.
Happy you had a good time!

I don't disagree with you about any of this. You are spot on. Sounds like you had a fun evening!

I am glad you enjoyed the concert in spite of being uncomfortable! I agree with you and those reasons are exactly why Joe and I don't buy tickets for concerts and plays very often (if at all). We don't go to the movies often either for some of the same reasons. Sigh.

I love Home Free, so would have enjoyed this concert. I also agree with you on all your points. We don't go to many concerts because of this sort of thing.
PS - We loved Keeping Up Appearances, and I can perfectly picture what that man looked like! :)