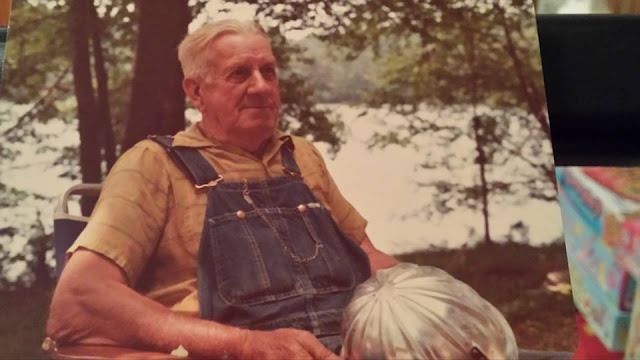 Yesterday was my Granddaddy's birthday. I never fail to think of him on February 19th. Henry Clifford Tankersley lived all of his life in Georgia. He was a mountain man who worked in Saw Mills in the mountains of north Georgia.  He passed on his love of the land to his two sons, Robert and Ray, my daddy.  He and my grandmother had seven children but only four lived to adulthood. They lost two toddler daughters to diphtheria and their oldest baby girl to prematurity.  Granddaddy loved to hunt and fish in his spare time. He was a superb Bee Man and his honey was some of the best  I have ever tasted.  After he retired he went back to work in the US Forest Service's Older American Program. This picture was made on the job at Lake Connasauga on Grassy Mountain. He was a quiet man but oh how he was loved by all of his grandchildren. I can only remember his "yelling" at the grandchildren one time. The Cousins had all decided to walk down the hill in the back yard onto a utility building which was built into the hill.  We were having a big time standing on the roof of the building when Granddaddy put an end to that. As an adult I know he was probably scared that one of us would fall off the roof. I am so blessed to have sweet memories of this dear man. I am proud that one of my sons( Charles Clifford) and one of my grandson's( Henry Baylor) carry on his name and his legacy.
Posted by Arlene @Nanaland at 6:00 AM

Arlene, your grandfather sounds like a wonderful man. I see in the picture of him a man who was confident in what he did and yet humble in his approach to others. He reminds me of my father-in-law.

Sweet legacy Arlene. Our grandparents are really so important to us. We adore them when we are little, get a little too busy for them in our teens, and if we are lucky enough for them to still be around.

Arlene, what sweet memories you have of your Granddaddy!

He sounds like a wonderful man, who loved his family. It is so great to have such amazing memories of those we love.

What a wonderful photo, and what precious memories! My mother's father died when I was only four, so I have very few memories of him. I never knew my dad's father at all, as he died during my dad's childhood. You are so blessed to have known your grandfather and to have such sweet memories of him!

And yes, so wonderful that his names are going on in the family!

What sweet memories! I love to hear your family stories!

Beautiful memories!! Thanks for sharing your very special grandfather with us!

Oh what a lovely story about your Grandfather, Arlene. I too adored by Grandpa so much. I love to go down memory lane and think of all the sweet things we did together. Your Grandfather sounded like a wonderful man who cared so for his family. How wonderful that his name has been passed down in the family. Love the photo and I know you must cherish it. RJ

I love the photo and hearing your memories of him. I'm sure he would be thrilled to know that his name has been passed on to another generation!