When we arrived back at home from Georgia on Sunday, we had quite the chore to complete.  Our painter was due early Monday morning so furniture had to be moved! I had taken down most of the pictures and doo dads in addition to removing nails from the wall. I did leave the nails for the things I knew would be hung back in place.

I have to brag on my painter, Amador. He arrived at 8:30am with his helper. They immediately set to work, and at the end of the day, my living room, dining room, kitchen and alcove was complete. They returned on Tuesday to paint the fireplace and the ceiling in the bedroom where we had some discoloration from an old leak.   They were so careful with all of our things and cleaned up their mess at the end of the day.  I was very impressed with their work ethic. Unfortunately this is the exception rather than the rule these days.

So here is a peak at the results. 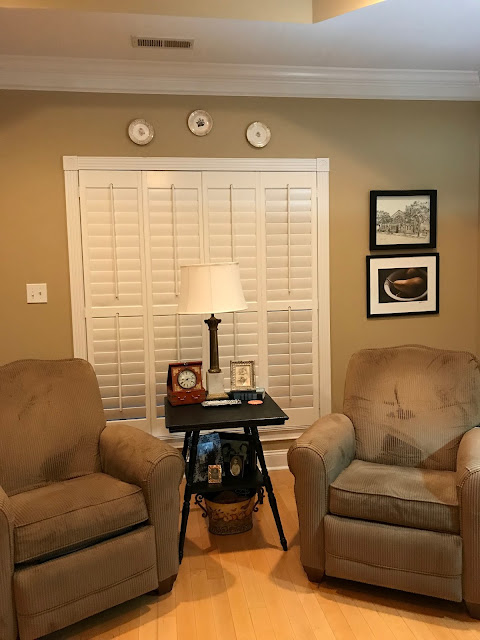 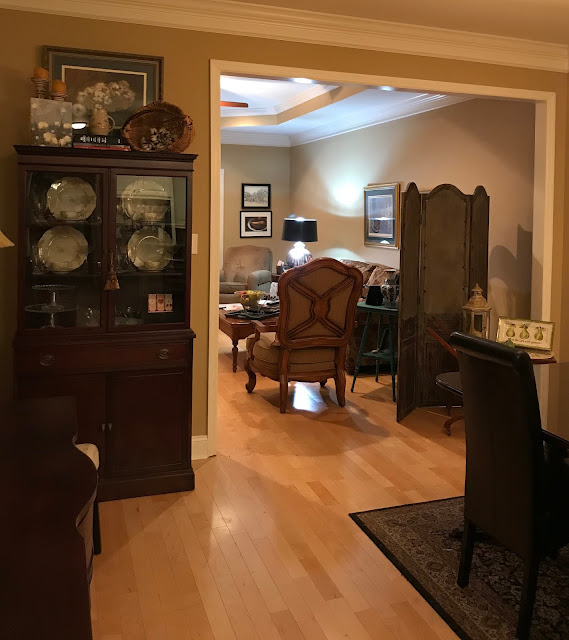 It really did unify the area by painting it all in Lenox Tan. I had used this color in another house so I knew I would like it. Amador told me that this is still a very popular neutral, he had used it in a lot of homes.

Now here is my alcove... 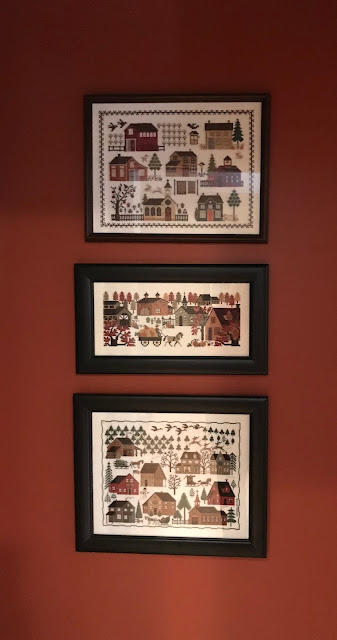 Cinnamon by Benjamin Moore was the perfect color for this small alcove that sits between the living room and the guest bathroom. I wanted a dark rusty red and this color delivered. Amador was very pleased at the result.  If the painter likes it, you have made a wise choice.

I have spent most of the day getting everything back in order. Then I will be back at my organizing. It is going to take a while to get everything just as I like it!
Posted by Arlene @Nanaland at 6:00 AM

I love it!!! Perfect color.

Arlene, How thrilled you must be with your freshly painted walls. The color is a great neutral and makes the white trim really pop! I love your shutters but be still my heart!! Your gorgeous stitches on the red really showcases them!! Just beautiful my friend!! Wise choice in colors!!

Absolutely beautiful, Arlene! I love both colors...and that Cinnamon in the alcove really makes your stitchery pictures pop!

Enjoy your freshly painted walls; both colors look fabulous! You are so right about work ethic these days. Enjoy the rest of your week!

Your home looks beautiful with these colors. I have to admit that I am feeling a bit envious because I am itching to get my house painted and I want to do as you did and paint all the "public" areas the same shade. We had the best painter years ago but he has since retired so it's back to finding someone new. My husband is a wonderful DIY-er but this is more painting than he is willing to tackle. I agree with you that if your painter approves of the color, it's a good one. The neutral shade you went with seems just perfect. I think I can imagine how much you're enjoying it!

Beautiful! I’m going to re do the guest room in the fairly near future. It’s a red now and I really like the Cinnamon color you used. So pretty and clean looking after the painters were done there! We are do it your self people but I would love to have the exterior painted for me.....maybe Louis Dean may go for that idea!

Love the results of your paint job, Arlene. Those beautiful PS pieces really pop against the cinnamon color. Well done :)

I really love your color choices! Wow!! You are right about current day workers. It's nice to find one who actually cares about the work he/she does!

I really likes both colors! It turned out great!

Perfection Arlene. The paint colors you chose are truly wonderful. You made some great choices. So nice you found such a good painter. RJ