How do you like that title? I believe I am stealing from Rod Sterling on Twilight Zone today!

I have a Book and a Brit Cop show to suggest to you for a lazy weekend. 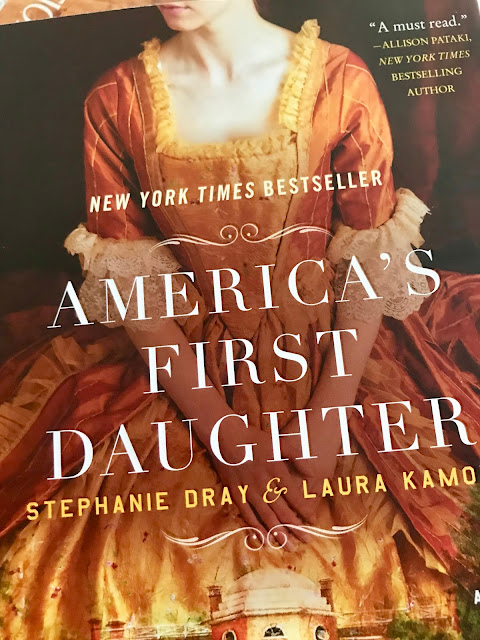 I have always been fascinated by the Colonial Women who helped shape our country. This book focuses on Martha(Patsy) Jefferson, daughter of Thomas Jefferson. I will warn you that it is a novel and not a non fiction work. I did look up some of the references etc and the research of the authors seems pretty sound.  Thomas Jefferson was a complicated person. Brilliant and yet self absorbed would be the two words I would choose to describe him. While  helping to found our country during the Revolution, he was often an absentee husband and father. He was very devoted to his wife and before she died after a complicated child birth, she begged Jefferson never to marry again. His wife had experiened an evil stepmother in her childhood and did not want her daughters to fall victim to that situation. Jefferson gave her his word and in doing so, placed a heavy burden on his oldest daughter. Patsy had promised her mother she would look after her father and she kept that pledge until her father's death. Patsy spent most of her teenage years in Paris when her father was the Ambassador to France. I thought this portion of the book was most interesting. Patsy was quite well educated and immersed herself in politics....even routing out a British Spy who had become a friend to her father. While in Paris, Patsy becomes aware of the affair between her father and Sally Hemmings and does her best to put aside her personal feelings on that matter.

Arriving back in America as a young women, life seemed good when she married her cousin, Tom Randolph. The Randolph family dynamics soon came into play and Patsy's marriage began to unravel. Seeking solace in playing hostess for her father when he became President, helped her to put aside the problems in her immediate family. Patsy had 11 children and most lived to maturity which was unusual in those days.  As the book draws to a close we see a different, older Jefferson. He has lost Monticello and his only desire is to die on July 4th. Which he does! This is a story of a strong woman who put aside her own desires for the betterment of her family.  It is a good read...I would give it three out of five stars.

On to a good British series.... 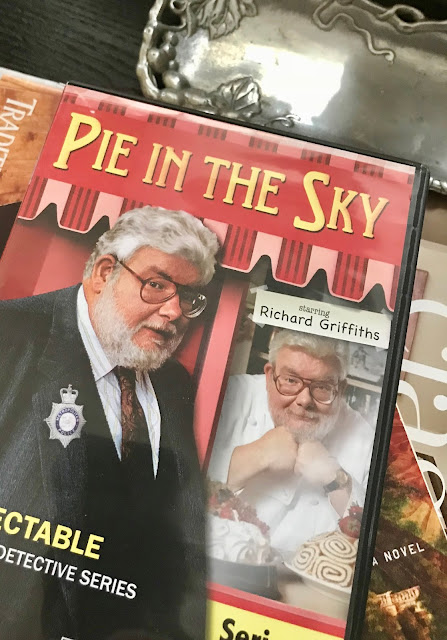 Marvin an I have so enjoyed this series starring Richard Griffiths. ( You may know him as Uncle Vernon in the Harry Potter movies...don't hold that against him!!) When we finished the last episode of a five year series, we were sad.  Henry Crabbe is a Detective Chief Inspector who is also a gourmet cook.He opens his dream restaurant, Pie in the Sky, while still being on call to Freddy Fisher, his old buddy who is now Assistant Constable. Fisher likes keeping Crabbe around because Crabbe solves the cases and Fisher takes the credit.  Life in the Restaurant with Henry and his crew is interesting and we are all pulling for Henry to be released to retirement so he can enjoy his passion, which is cooking. I believe you can find this show on Net Flix and Acorn TV.  Again I wonder why American Television cannot produce the quality shows the Brits have been doing for years.( This series is set in the mid 90s....showing again how much things have changed in such a short time.)

Oh and the Bunny my sister got for me came from Dollar General Store.....We call it the Dollar Store in our neck of the woods. The other store is Dollar Tree.

Happy Reading and Watching!!
Posted by Arlene @Nanaland at 6:00 AM

Arlene, thank you so much for the wonderful review of Patsy Jefferson. I definitely want to pick that one up...especially since you checked out some of the information. Pie in the Sky sounds like a good program, too.

The book sounds good. I will write it on my list. I had to chuckle about the Dollar store. That is what Mother and I call it as well which usually leads Lindsay into a tirade about why she doesn't like that store, because nothing in there is really a dollar like the Dollar Tree and they should change the name of the store. Young people!!!

Thank you for both the book and show reviews, Arlene. I will have to check out Dollar General for the bunny. Well, as soon as the snow stops and the road is cleared. Enjoy your day!

I so agree with about British TV, they have some excellent shows. Great book reviews, I must say I did not know about Patsy Jefferson. Sounds like a very interesting book. We also have Dollar General and Dollar Tree. Like you, I just say the Dollar Store!!

What good reviews! Thanks for taking the time to share these with us! Hugs!

That book sounds very interesting. I'm going to have to check out that show. We love Brit shows too!

Great review of what sounds like a very interesting book. And we are going to look for that tv series and give it a try. Thank you Arlene. RJ

I think my sis and I would really enjoy that book.
Hope you have a good day. xo

Arlene, I'm with you, I much prefer the British shows to what we produce in the US. Masterpiece Theater shows are my favorites. The books sounds very interesting, thanks for the recommendations.

That book does sound very good! Joe and I love the British detective shows and have not seen Pie in the Sky. We just started watching Doc Martin again while our friends were here... got them hooked on it. Thanks for the reviews!