One of the nice things about Facebook is that the site shares your memories from years past. Being rather Sentimental, I always enjoy these strolls down memory lane.

My daddy's birthday was on April 9th and this photo popped up on Facebook. 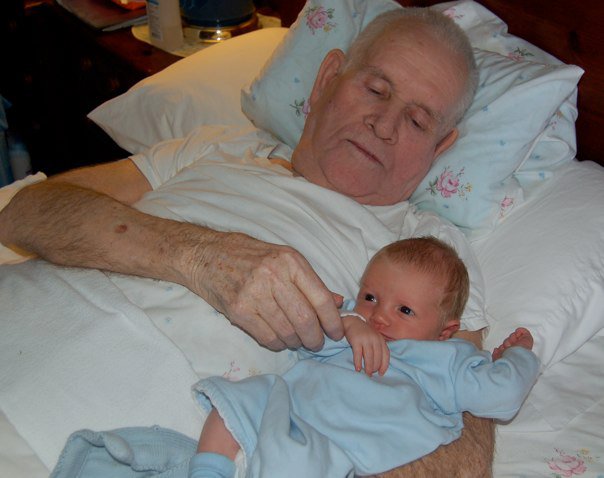 This was Daddy's 80th birthday and all his children, grandchildren and great grandchildren were on hand to celebrate. At that time he was bedridden with transverse myelitis but that did not stop him from enjoying his family. Here he is with baby Baylor who was just two weeks old.  Baylor was the last great grandchild that Daddy got to meet before he went to heaven.  Baylor is Henry Baylor, named for Daddy's father, Henry Clifford Tankersley.  I always love to see pictures of the older generation with the new babies. So many hopes and dreams are in those snapshots.

April 3rd was Mother and Daddy's wedding anniversary. I called Mother to tell her Happy Anniversary. I also thanked her for being such a good example of a godly wife and mother to her family. She usually deflects compliments but that afternoon she thanked me for the kind words.

When I am at Grimmwood, I often think, I wish Daddy could see our little cabin.  He would have loved sitting on the rocking chair on the front porch. When I am with Elliott and Margaret, I wish Daddy could have met these two youngest great grandchildren.  Another reminder to me to cherish the moments that seem mundane but will soon become special.
Posted by Arlene @Nanaland at 6:00 AM

Such a sweet memory Arlene. So glad we get to see them again.

Precious memories are a blessing. My Daddy has been with the Lord for 17 years and I still miss him everyday.

I like those FB memories too. This is a wonderful one!

April 3 was my grandmother's birthday! She was born in 1901. So that date has special memories for me.

The picture is just beautiful. Such a blessing that your father got to meet Baylor!

What a precious post, Arlene. Thank you for sharing with us. My paternal grandfather's birthday was April 9. :-) Cherishing the moments is necessary.