We arrived in Savannah on Thursday afternoon and headed to Marvin's sister's house. Mina is always a gracious hostess to us when we are in town.  Mina has been a widow for some years now and she enjoys having company.

We had our first meal at Crystal Beer Parlor downtown. 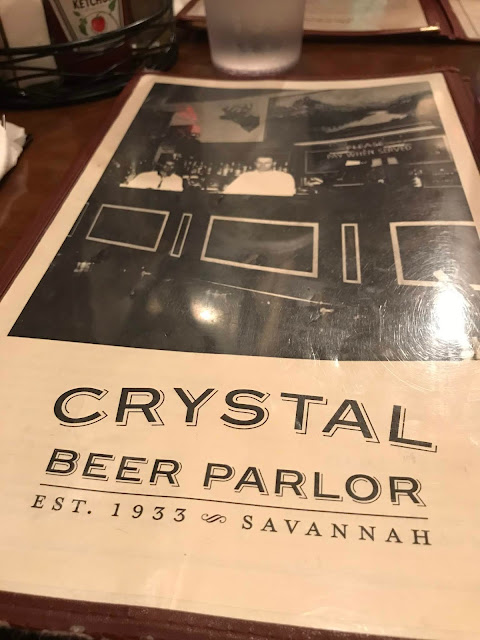 they have wonderful sea food. I got my usual Shrimp Salad sandwich! 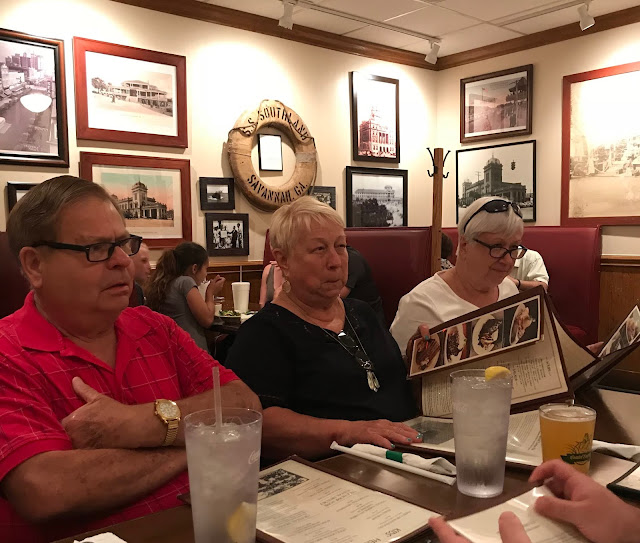 Robert, Mina and Gloria joined us. Robert is Mina's brother in law and he has been like family to us as well. My children called him Uncle Robert when they were young.  I guess they thought if Robert was Stephen and Benjamin's uncle, he was their uncle too.   Gloria's mother and Mama G were best friends, and Mina and Gloria are good friends as well. 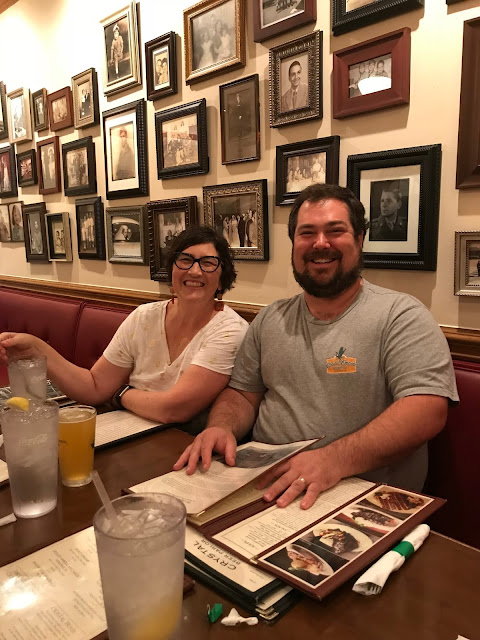 Our nephew, Benjamin and his wife, Ami.   We had a big table! As you can see in the background of this picture, there are lots of old pictures of Savannah displayed at this restaurant. 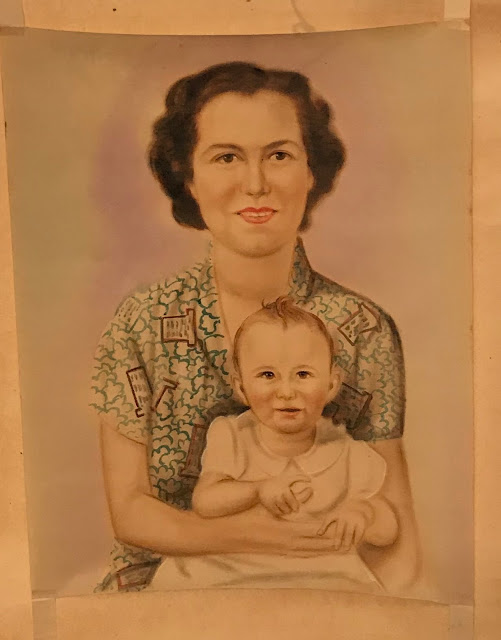 Friday we helped Mina go through some more things that belonged to Mama G.  We found this silk painting of Mama G and Mina. Papa was in Japan and he had a Japanese artist paint this portrait from a photograph.  We found a few more treasures as well.  Just when we think we have finished with our sorting some new boxes come to light. 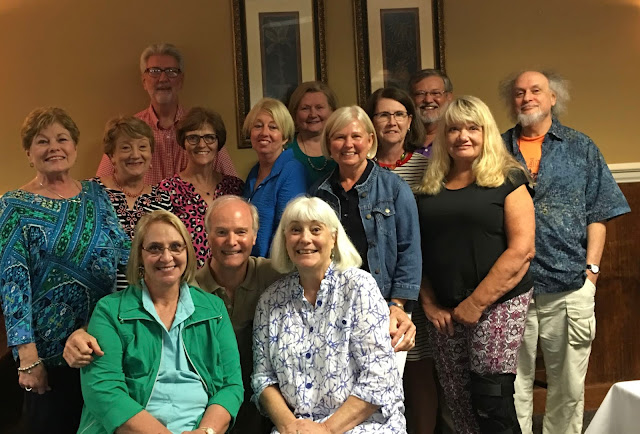 This is the planning committee for Marvin's 50th high school reunion which will take place next summer in Savannah.  We had a nice visit while having a meal at Carey Hilliards .  The time and place is nailed down, now to do the contacting of classmates. Marvin's class had about 600 members.

On Saturday we got together for a family cook out. 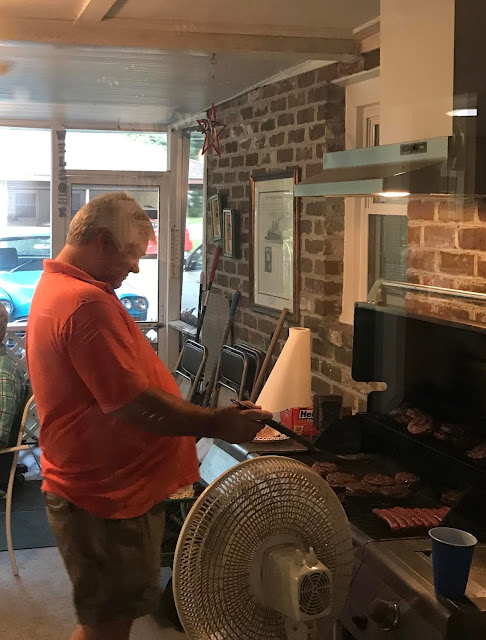 Cousin John William was the pit master.lol See the fan he had blowing on him. Summer is Savannah is hot and humid. 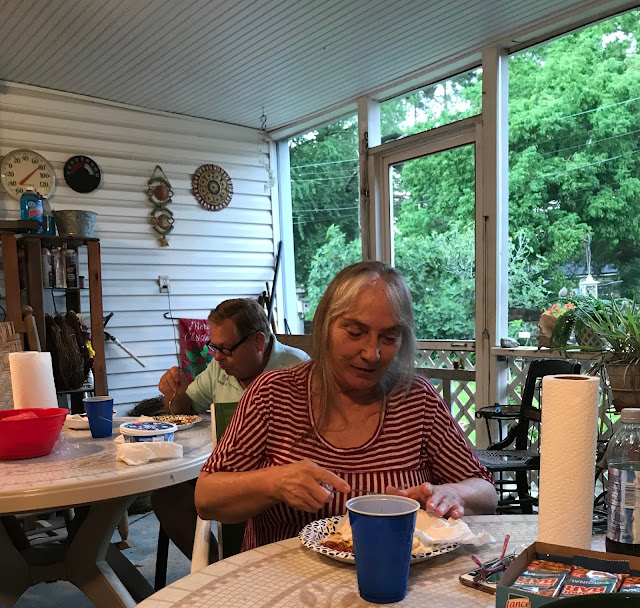 A rain storm did cool things down a bit. Here is Marvin's cousin, Dewilla. She and I have been friends since I met Marvin. 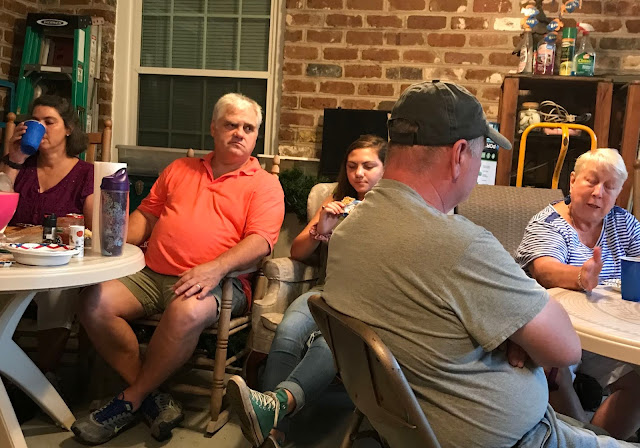 Several cousins were out of town on Vacation but we sure enjoyed the ones who were able to attend.

While in Savannah we enjoyed breakfast at Sunny Side Up several mornings. If you are in Savannah it is a nice local place to start the day off!  I always enjoy knowing the places the home town people gather.

It was a short and sweet visit. Savannah is truly a lovely city and a great place for a vacation.
Posted by Arlene @Nanaland at 5:00 AM

Sounds like a wonderful time in Savannah. I am not thinking we are going to get too many trips this summer, but maybe fall.
This painting is so pretty. You know you either lose them too young or as aging. Both are hard! IT is a part of life. I know I need to do a little better about staying in touch with my cousins. I have a few I text with and send pictures back and forth, but I am not as good as I should be.

Well you've sold me on Savannah! I've seen photos of it before also and think that Mr. C and I should travel there next winter. Looks like you had a good time. I think my graduating class was about 150 students.

Wow, Arlene! It looks like you had a fabulous visit with family and friends while in Savannah. Sunny Side Up sounds like my kind of place to eat. Thank you for sharing.

I’ve never been there but I so enjoyed reading about it and seeing all your family photos!

Seems like a wonderful time in Savannah with family and friends! We have been there once and enjoyed our visit very much. You shared some great photos and have even greater memories from your visit. The class reunion will be a great success, I'm sure! My senior class had 47 kids. Hard for me to imagine 600!

Looks like you two packed a lot into the weekend. It's been some 20 years since I've visited Savannah. A very pretty place.

Looks like a fun time in Savannah! I would love to visit there sometime, but not in the summer!