It is always a bit different being in Decatur for a weekend. Yesterday, Marvin and I got out to go to the library to exchange our movies.  We have pretty different taste in movies so he watches his in the man cave and I watch mine downstairs while I stitch.

We did watch The Darkest Hour together. It is about Churchill and how he rallied England in the dark days before the US entered WW2.  A very good movie. Gary Oldman who played Churchill may be remembered by Harry Potter fans for his role as Sirius Black. We did see a few familiar faces in this movie....Rory from the Hamish Macbeth series, Reverend Collins from the 1990s Pride and Prejudice as well Tommy Lascelles from The Crown.  I watched The Phantom Thread which starred Daniel Day-Lewis. If anyone can explain that movie to me, I would appreciate it.lol

My picks for this week are A Royal Night Out, Miss Peregrine's Home for Peculiar Children( I read the book and Kendall and Landon said it was pretty good) The Big Sick( Charles and Nancy suggested this one)and Brooklyn which I had wanted to see when it was in the theaters but I missed it. Kudos to the Decatur Library for their good selection of movies for the patrons.

After the library we checked out High Point Market. This new venture sells locally sourced products. I was looking for Shine On Coffee, which is roasted here in Decatur. Alas they did not have any decaf but I put my name on the list to be notified when some is available. Marvin picked up some sausages and I got a cute High Point Market tee shirt.

From their we strolled down the street to The RailYard for lunch. 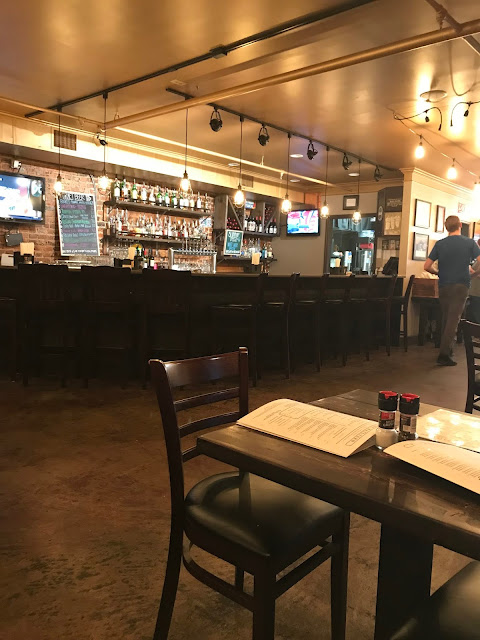 The Rail Yard refers to Decatur's past and the present as a RailRoad Town. 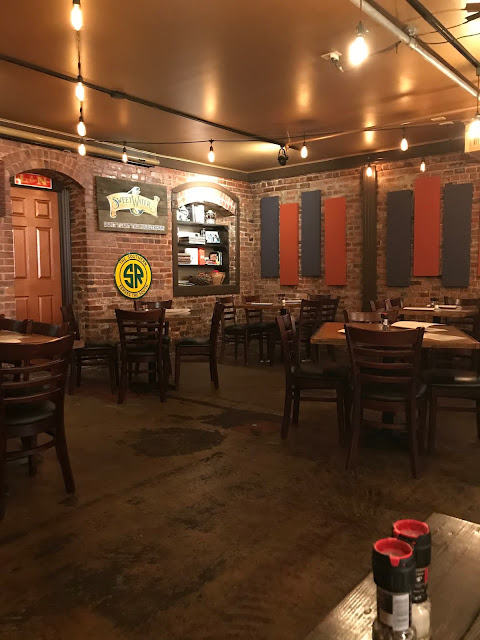 We like this restaurant but it had been a while since we visited it. 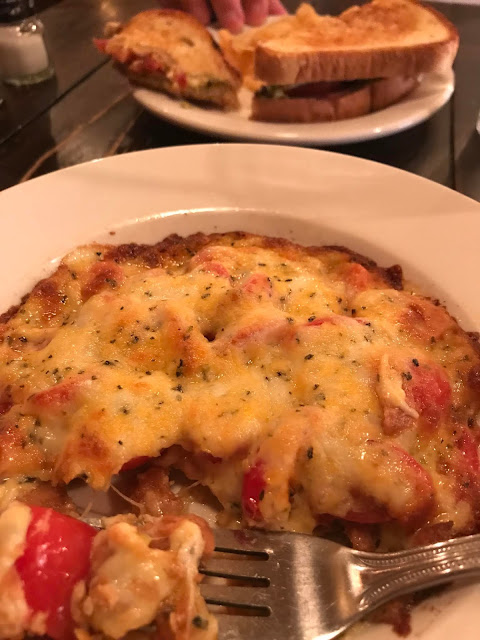 I had Tomato Pie. 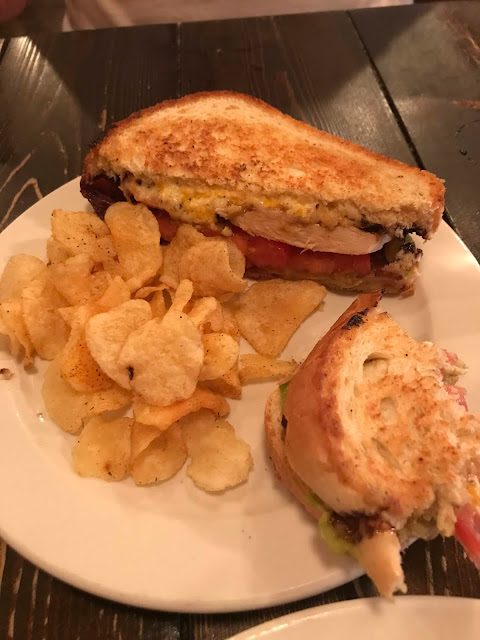 Marvin had the L and N sandwich...chicken, avocado, tomato and several cheeses. It was served with their home made chips.

We were both happy campers as we paid our bill and headed to Pineapples to get a little flag for Grimmwood. I found a perfect one as it said, Farm and Family. I will share a picture when I get it in place.  While I browsed Pineapples, Marvin took a stroll down the street. He declared Pineapples a Girly Place.  And I guess he is right. Saturday was just a lovely day here...the humdiity was low and you could almost feel a touch of fall in the air.
Posted by Arlene @Nanaland at 5:00 AM

Sounds like the movies 'hit the spot', and the day in Decatur was good as well. I felt the same as you, thinking there was a touch of fall in the air.....must have been the low humidity, but I will take it any day. Hope your new week goes well.

That's my kind of fun! And the sandwich looks incredible! Enjoy your day!

Your outing in Decatur sounded like fun. Your lunches looked good especially those home made chips. Have a good day, Arlene!

Mr D and I seldom agree on what movies to watch. That's why he has his TV and I have mine. It's okay though, God made men and women different!! That tomato pie looks so good!!

Joe and I usually enjoy the same type of movies so we rarely separate to different TVs. Once in a while, though, I would rather watch a "chick-flick" than a sporting event. Your lunches look delicious and that little shop sounds like a place I would love too!

That tomato pie looks SO good, Arlene. Your day sounds lovely just being together and out and about. My kind of day. :)

Your lunch looks very good!
We thought The Darkest Hour was very good too. I didn't see the movie, but did enjoy the Miss Perigrine books. You'll have to report back on how you liked it!

We usually watch the same movies together but when I'm not as interested I'm busy stitching and looking at the tv now and then.

Your lunches looked wonderful. What a neat looking place too. RJ

I'll pick up The Darkest Hour next time I'm at the library, sounds like one both of us would like. Oh My, that tomato pie looks scrumptious!!! I hope your recipe is a good one, I would love to try that! My husband is a huge rail fan, he would love that restaurant.

Sounds like a great day. I'm making tomato pie sometime this week after seeing your lunch!