Bees Wax for the Win

When Marvin started keeping bees, I really thought it would be his hobby but it has morphed into a hobby for me as well.  Before we harvested our first honey, I did lots of research on You Tube about how to harvest and preserve the honey. It is amazing to me how much you can learn online these days.

We do not have a extractor so we took care of our honey the old fashioned way. Cut the comb away from the frames, uncap the comb and let the honey sit in a double colander until the honey is pretty well removed from the comb. I also cut up some of the comb and put it in a few jars...us old timey people like to chew on the comb.

As a result of harvesting our honey this way, we had a lot of comb that I kept for a future use. Again  I got on the internet and found that beeswax could be rendered and used for many things.

My first project was to make some wax threaders for me and my stitchy friends. But first the wax must be rendered. 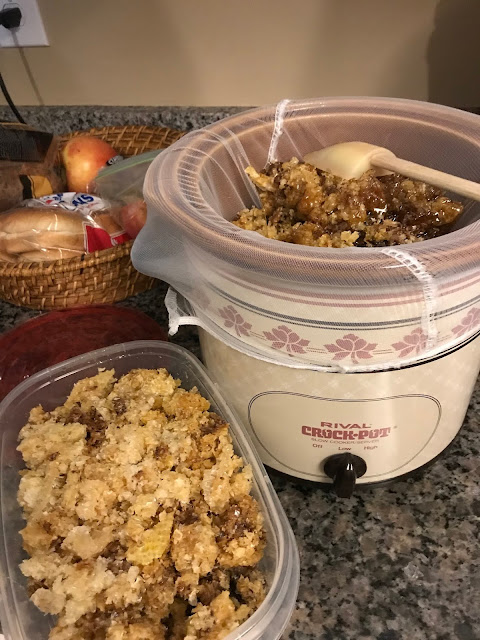 Here is my old crock pot from Edna May....and hey I like these old crock pots. They work better than the new ones in my opinion.  First add one cup of water to the crock pot. This allows you to get the wax out at the end of the process. Then take a one gallon paint strainer( purchased at Lowes) and place it over the crock pot. I had to snip the elastic to make it fit. As you can see you want to make sure the strainer is about one third of the way from the top of the pot. Then spoon in your comb. The honey will drip out and fall into the water. The wax will melt and fall into the water as well. You will be left with the dregs in the stainer at the end of the process. Just toss the paint strainer in the garbage and turn off your crock pot.( oops...I forgot to say that you should turn your crockpot to low) I unplugged my pot put the lid on it and let it sit overnight. 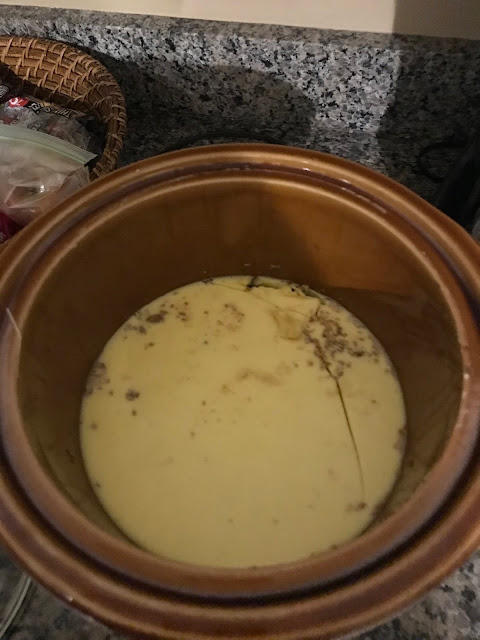 Here is what the wax looked like in the morning.  I ran a knife around the crockpot and pushed down on the wax. After some maneuvering I was able to get it out of the pot. I emptied the water outside as it had honey and bits of wax in it so it was not going down my kitchen sink. 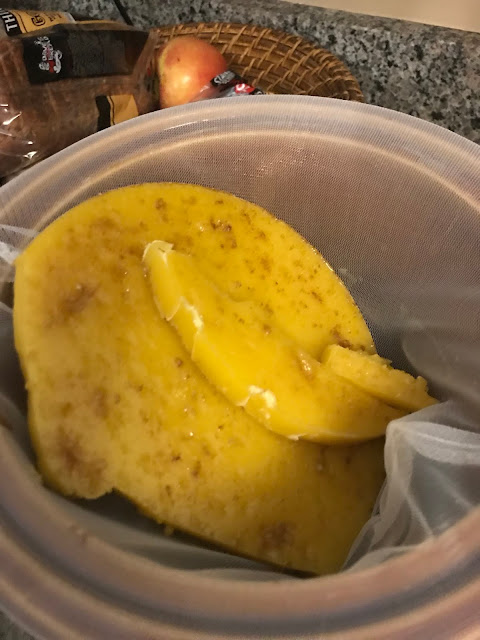 I began the process over again. Rendering often takes two or three days to complete.  Once this melted, all those brown bits were in the strainer and not in my wax. 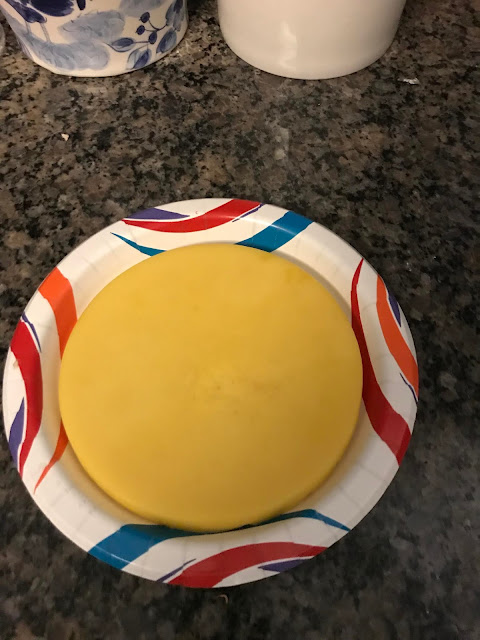 My finished beeswax...isnt it pretty?

I broke it into four pieces and melted it in a Pyrex measuring cup I bought just for my wax work. Then I put the Pyrex into a large pot with simmering water.  Once you begin this part you must stay with your wax...it is flammable.  I melted mine in small portions.

I used mineral oil to lightly lubricate the molds  I found in the candy department at Hobby Lobby. Then I slowly poured the wax into the molds. I suggest using newspaper on your counters to keep everything tidy. 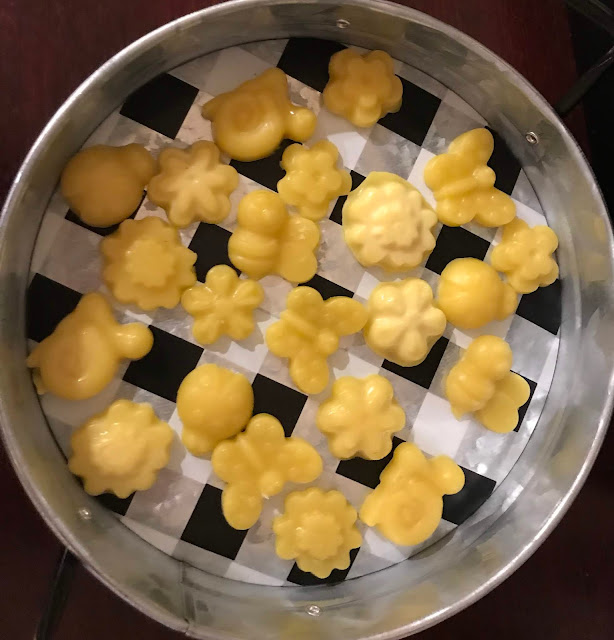 After the molds had hardened...I turned them over and using a wooden spoon gave them a whack and out they came intact.

I let them sit for two days to cure. I plan to look for some small containers for them at Dollar Tree.  After I was finished, I still had two pieces of wax left over... 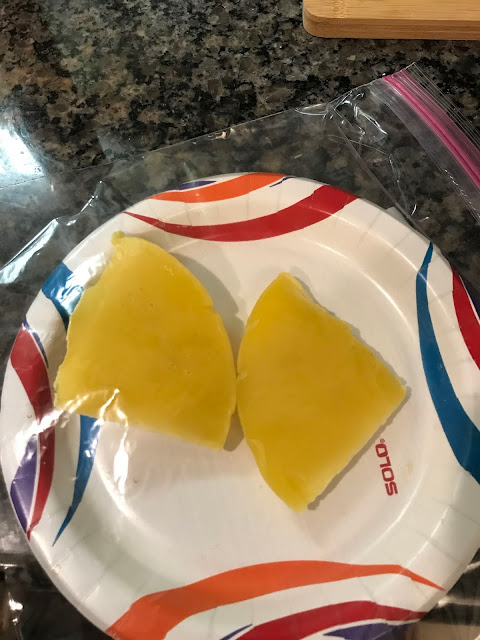 I am going to be doing some more research on how to use this!
Posted by Arlene @Nanaland at 4:00 AM

What a wonderful picture tutorial you provided, Arlene! You might want to check out the candy/cake aisle for cellophane bags and/or containers. Enjoy your Monday!

You are making me want to be a beekeeper. I know it is work though:)

What a fun product you ended up with! An interesting hobby that is useful AND tasty!

Arlene, my hat is off to you! I would never have had the patience to render the wax...and we had an extractor! You did a beautiful job...that finished product is absolutely beautiful and I love the little molded pieces you did, too! Just lovely. GREAT job, You!

This was the most interesting post! I love the threaders, wonderful gifts for you stitching friends. I've heard that harvesting honey from your own area is good for allergies because the bees collect pollen from local plants.

Glad to know you both are enjoying the bees. This was a fun post to read. I also see you have a new grandson. Congrats.
Mildred
I've missed hearing from you

OH my I am so impressed, I love how the finished product turned out. Great job.
Sue

This is so interesting! My Grandpa had bees but I don't think he ever did anything with the wax. These would make great gifts.

Arlene, this sounds so interesting and you really described the process so well. The end results were wonderful and the molds truly turned them into adorable thread waxers. You are very resourceful.

I wrote and told you about my internet problems so you know why I've had trouble posting but I have read all the posts I missed and have enjoyed them all so much. I especially enjoyed your trip posts. You are a great travel guide and make me want to see all of the places too.

The "grandchildren" posts are always a delight. I loved seeing your newest grandchild. I've told you many times you are such a blessed lady to have this wonderful family. And, you and Marvin are simply the best grandparents.

Glad to be back and continue to enjoy all of your fun posts. RJ

WOW, Arlene! That is amazing! Good for you for using every bit of your honey/combs. We have thought about raising bees though I'd rather tap maple trees for syrup instead. Love the finished wax from the molds.