Before I get into Day two, I thought you might like a look at the cookbook shelf in the kitchen. 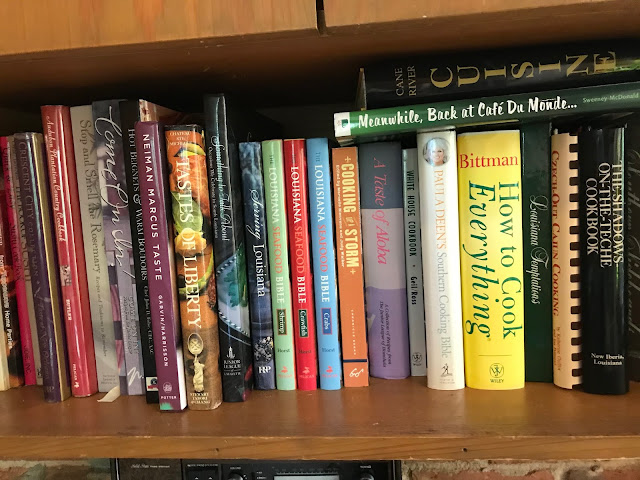 We started out the day downtown. It is such a pretty waterfront town, reminded me a bit of Savannah without all the crowds. Natchitoches is one of the oldest towns in Louisiana. 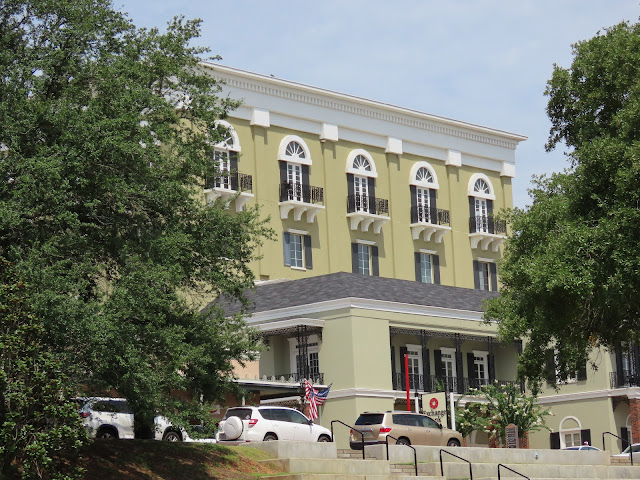 The steps lead down to the Cane River. Lots of people were kayaking and water boarding.
Marvin and I enjoyed all the stores especially the Mercantile which is the oldest in the state. Then we went to Cane River Kitchen. Oh my goodness, we sampled so many yummy things there. We ended up bringing home some of their mixes. We were told we could order online as well.

Knowing we were having a nice dinner, Marvin opted for Gumbo for lunch. So he got a cup of gumbo to go and we sat on the covered plaza while he ate his lunch. The plaza also had ceiling fans for which we were very grateful. It was a nice place to sit and people watch. 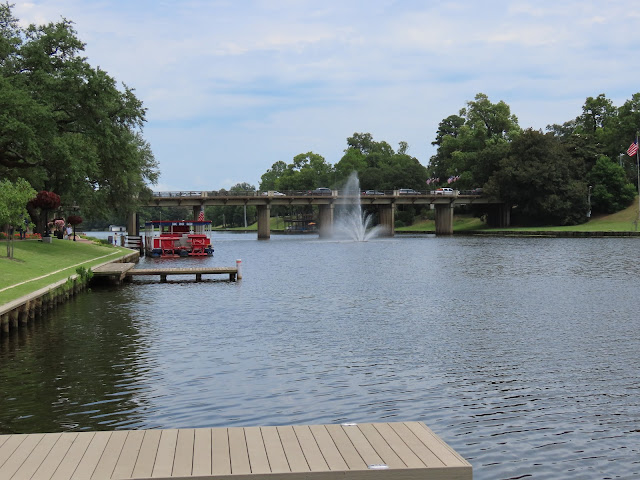 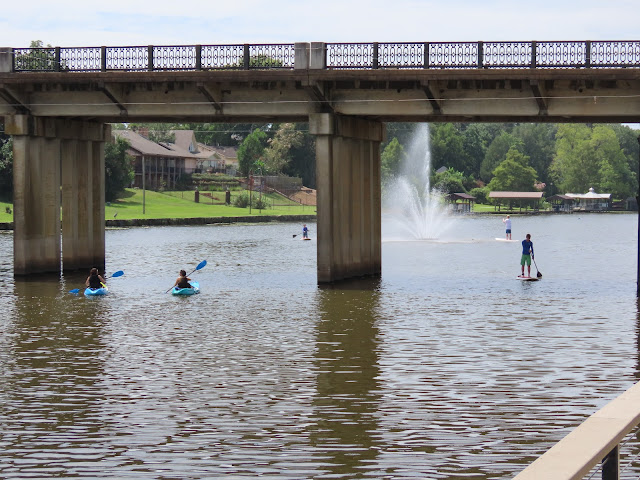 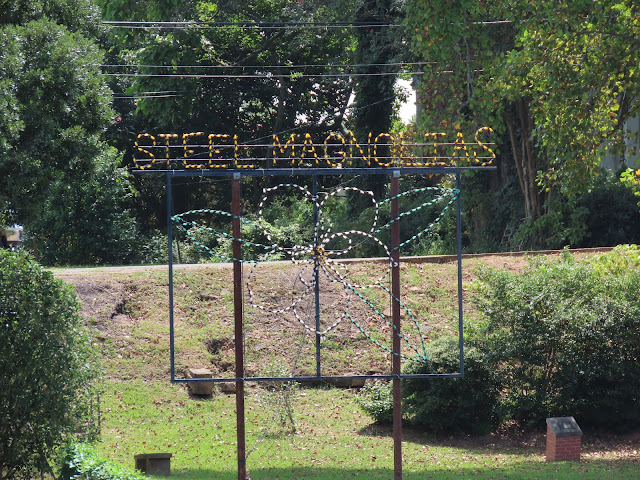 These lighted decorations were located up and down the Cane River. 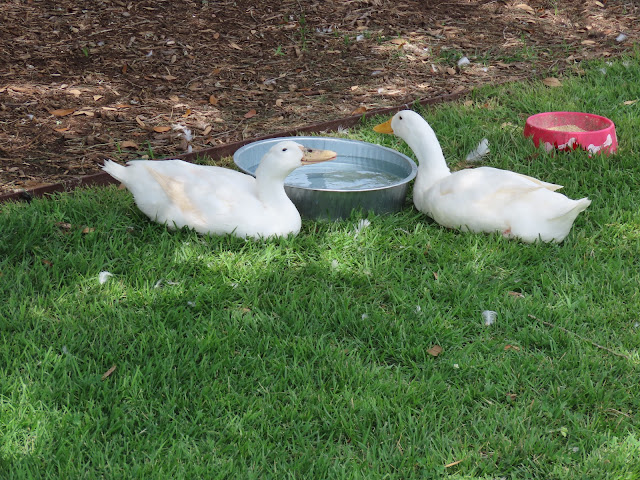 The people of Nackatish take care of their duck population.  I had hoped Marvin would take pictures of the pretty flowers for me to use here on the blog but he thought the ducks were more interesting.:)\

We rode around looking for other movie locations. Here is Truvy's House ....it is a private residence but that did not keep us from pulling over and snapping a photo. 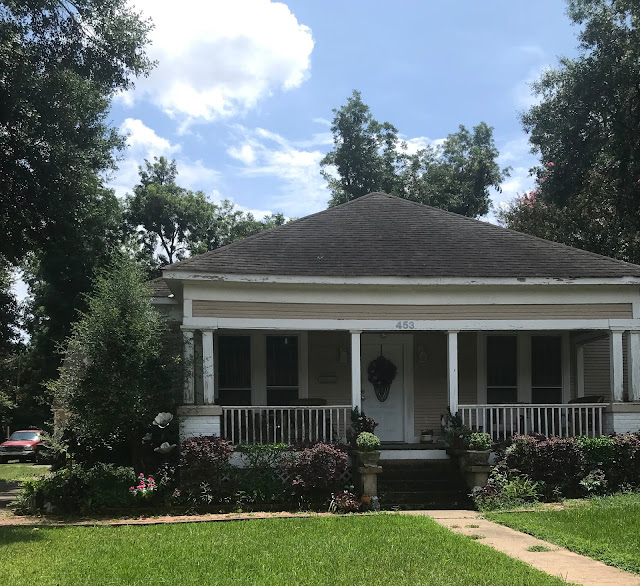 We took a short walk through American Cemetery. It is the cemetery you see in the movie. It is the oldest American cemetery in Louisiana. It is a pretty cemetery but many of the grave stones are falling down and in ill repair. It would be a good project for a scout troup.  We were told that the real Shelby's father, Mr Harley had been laid to rest earlier this week. He died at the age of 97. The real Shelby was Susan Harling who died in 1985 of complications of diabetes. Her brother wrote Steel Magnolias to honor her. Also Susan's husband had remarried fairly soon after Susan's death and her son was calling the step mom, Mama. Susan's brother wanted his nephew to know how much his mama had loved him and what she went through to get him here.  The local people of Natchitoches enjoyed figuring out who was who in the movie. Several were sure Ousier was based on them!!

For dinner we drove out to Mariners...the restaurant where Dolly Parton ate every nigh when she was filming there. My Amelia loves all things Dolly so we had to go there. It was very nice and you could tell it was a local favorite.

After dinner we took some pictures outside.

More stars noted at Mariners.lol It was so bright, sunglasses were in order. 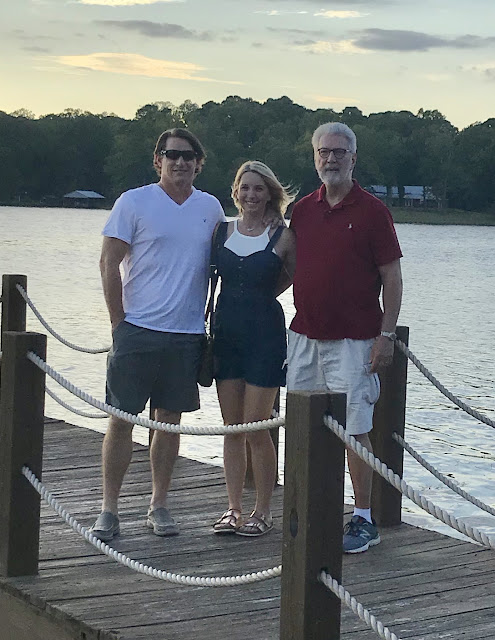 Amelia says for once she is not the tallest person in the picture. 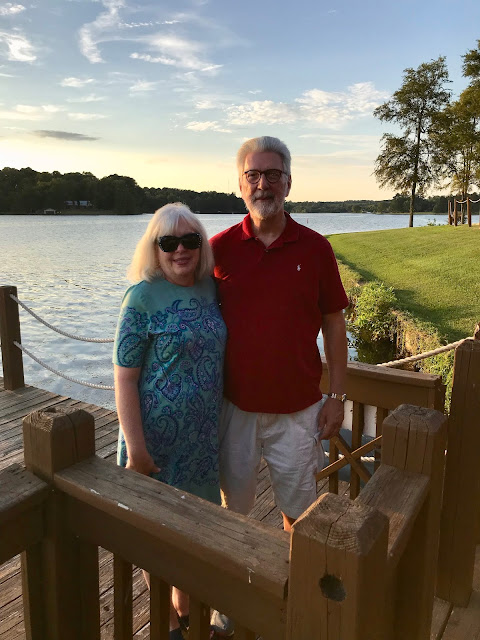 We had such a nice weekend. I am thankful to Amelia for suggesting it and planning it. We stopped in Meridian Ms for the night on the way home. Our dinner choice there was Cracker Barrel. And guess what Christmas is coming girls. I took some pictures for Friday Five.
Posted by Arlene @Nanaland at 4:00 AM

A very pretty area and the food sounds great. John loves gumbo. I was in Cracker Barrel earlier this week and saw the Christmas decor.
It was fun to see your cookbooks. I once collected cookbooks from all the places that my parents, John and I would visit.

Such an interesting post. Steel Magnolias is one of my favourite movies. Im glad you are having a wonderful time
Phoebe x
P.S.... I would have taken a photo of the ducks too x

This looks like such a fun trip and such a sweet time with Amelia. Y'all look wonderful together.

I love the cute dress you're wearing and your new profile pic! Looks like a neat place to have a vacation. How nice to see all the places in the movie. I love that movie....and I always cry! I should watch it until just before the end and stop it early! Too sad! Love those ducks!

It looks like day 2 was a fabulous adventure as well. I never knew that (or didn't realize) that Steel Magnolias was based on the life of Susan Harling. It sounds like you had a delicious meal at Mariners.

What a fun trip y'all had!! Your photos are great and I know you had a great time! Thanks for taking us along with you!

What a wonderful trip you had. Lovely family photos too!!

I enjoyed tagging along with you! Sounds like another fun trip.
PS - not ready for Christmas! :)

You are having too much fun Arlene but you forgot to take me. Everything about this trip looked great. I had breakfast in Cracker Barrel the other day and almost bought a cardinal for Christmas. RJ

What a great idea for a get-away! I'd love to go someday. Thanks for the tour and fun ideas.

What a fun trip! Loved hearing about the Steel Magnolias connection :) And I love the photo of you and Marvin!