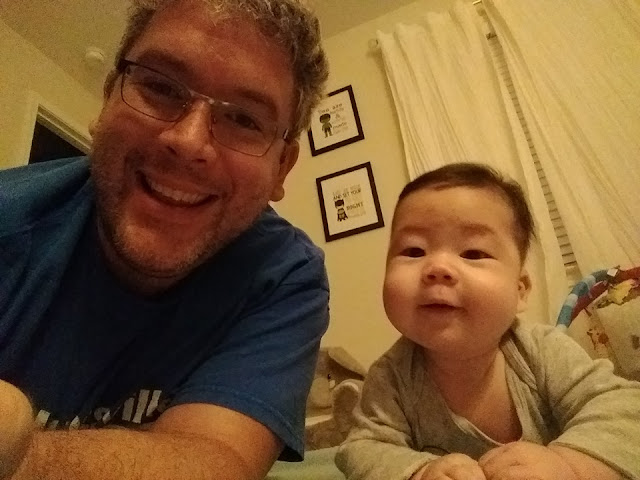 It looks like Joshua is posing for his Grimm Mens Club Photo Badge in this picture.

When our boys were little, we called any outing of Dad and his sons ....the Grimm Mens Club. They went camping once but neither of our boys were wild about sleeping in a tent when they had an air conditioned room at home. They did enjoy going to ball games and as both Charles and Ben played basketball in high school, their dad clocked a lot of gym time. Marvin went to every game that he could attend, sometimes alone because frankly I was not a huge basket ball fan and I got so nervous watching the boys play.  Ok, I was more nervous when Ben played as I knew it really mattered to him. Charles played to be with his friends and never took it as seriously as his big brother. I always said if I could make a basketball player with Ben's skill and Charles' aggression I would have the perfect specimen.

Joshua is a bit congested so he missed the church nursery this week. Charles said the ladies who keep his nursery told Charles that Dad could not come back to church next week unless Joshua was in attendance as well!! So glad the church ladies love on my sweet boy.
Posted by Arlene @Nanaland at 4:00 AM

I have LOTS of boys in my family and have a soft spot for the guys! What sweet photos! Enjoy your day!

That Joshua is a heart melted lol, what a cutie, I hope he feels tip top soon!

Oh my goodness, what a fabulous shot of Dad and his boy! I hope Joshua is feeling better so he can attend nursery on the Sunday. Wouldn't want to see Dad banned!

Joshua is a cutie for sure! Hope he feels better real soon

Joshua is so cute, I'm sure he's very easy to love. My two older girls were different too. Only 23 months apart, one was/is very quiet and reserved. The younger loves to talk and is always active in something.

Well, seriously now... who wouldn't love on that sweet boy?!! He is adorable, just like all of your Grimm men! I hope he is over the sniffles!

Joshua is so adorable and yes, he definitely does look as if he is posing for his club badge! It's a great photo of Charles too.