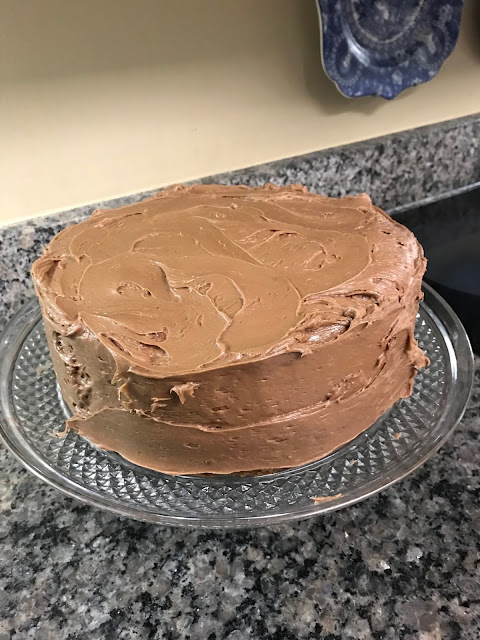 For years I have been on the hunt for the best chocolate chocolate cake. The cake part was not the problem....it was the icing that was giving me fits.

Well thanks to a recipe in the Jan/Feb issue of Country Woman Magazine, I have a winner.

For the cake portion of used a triple chocolate cake mix...sorry but I do not remember the brand. I use the Cake Doctor's suggestions when using a cake mix. Melt  one stick of butter to use instead of the oil. Use Milk instead of the specified water! This makes any cake mix cake taste like  a made from scratch cake.

From now on this is my go to chocolate icing. It got a thumbs up from friends Susan and Janet as well as daughter, Amelia!! Enjoy!
Posted by Arlene @Nanaland at 4:00 AM

Oh my goodness, that looks perfect/yummy. Glad you found the icing recipe and it is a keeper. Happy Wednesday.

Interesting to ad sour cream to icing...I am definitely going to try this!

It is certainly pretty enough to be good:)

That cake looks incredible, Arlene! Glad you found a chocolate frosting recipe that is a keeper. Have a wonderful Wednesday!

Arlene, I would never have thought to add melted butter and milk to a mix; great tip! The frosting recipe sounds delicious too. Definitely going to try this. Thanks for sharing and have a lovely week.

Looks scrumptious, and I am going to remember that cake mix idea.

I have a chocolate icing that I love, called Easy Perfect Milk Chocolate Frosting, and that one is my go-to.

Beat the softened butter in a medium bowl. Slowly beat in the remaining ingredients until combined, then beat on high until frosting reaches desired consistency. This frosts a 13 x 9 cake generously.

That cake looks so too pretty to eat! Love your tips and recipes, going to print your post and add it to my recipe book. Thanks for sharing

WOW! That cake looks so good! So you have to refrigerate it since it has sour cream in the frosting?

I have been using a cream cheese chocolate icing recipe but this one sounds delicious! Thanks for sharing!

Our favorite chocolate cake is the Hersheys Perfectly Perfect Chocolate Cake and the companion icing. You can do cupcakes too for portability. You must try it sometime!

I'm sure it tastes as good as it looks, Arlene! I'll have to remember those tips on baking a homemade tasting cake using a store-bought mix--makes a lot of sense :)

It looks yummy! I've done that cake doctor version and it's good. Now I'll have to try it with your frosting.