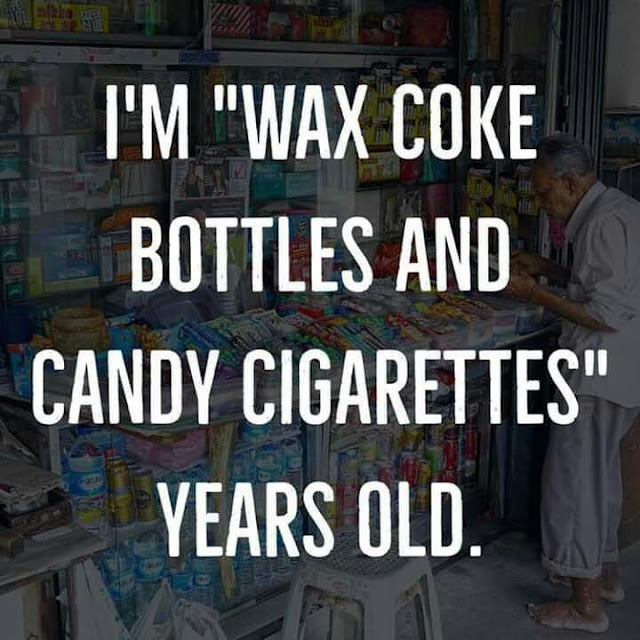 Someone posted this meme on Facebook and I could not help but chuckle. Being a mid century modern, I remember these two candies with affection.

When I was a little girl I enjoyed visiting my Henderson grandparents who lived just off of Highway 225, a major thoroughfare in our county.  Some of my best childhood memories were made at this little home. Central Grocery store was located nearby and if Granddad went to the store, he would come home with Hot Tamales or Little Debbie Banana Twins. Those were two of my favorite things and while he was not a grandfather who hugged and kissed you a lot, he knew what candies were favorites. 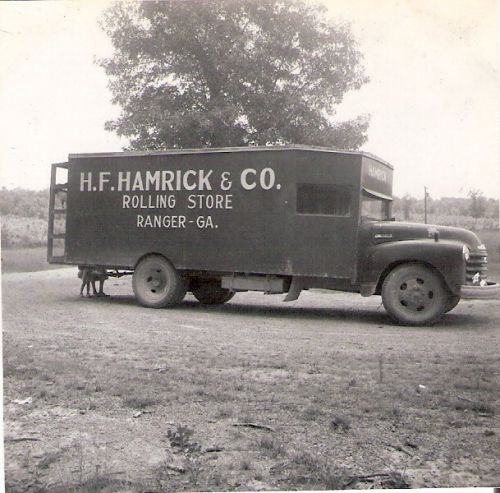 But the best days at their house was the day The Rolling Store came down the road and stopped at the end of their driveway. I can still remember the smell of that big truck combination grocery.  The back door of the truck was opened and you had to climb up steps to go inside. As a child, those steps seemed pretty big to me but the treasures inside the truck were worth the climb. I can remember picking out candy cigarettes as the candy I wanted and my grandparents let me get them. I am not sure if my parents would have let me choose that but hey Grandparents are much cooler about forbidden fruit.:)   When I was a girl, just about everyone smoked. We all wanted to look like the adults so candy cigarettes were in order. They did not taste good but you looked good holding it between your fingers and waving it around pretending to blow smoke.  The wax coke bottles were not a favorite. Once the liquid was gone, the wax was just a sticky mess. I preferred cigarettes. Oh and did I mention your cigarettes came in a box just like adult cigarettes? Perfect for toting around in your pocketbook!  ( The picture of this Rolling Store from Ranger GA was very similar to the one that stopped at my Grandparents home.) Ranger is actually not far from my hometown so it might have been this company that came by!

While my daddy was a smoker, my mother was not. Daddy taught me a lesson about smoking and it took place on the front porch at my grandparents home. I was little, not sure exactly how old I was but I was pestering Daddy to let me smoke. Okay...he said, come here. He let me put the cigarette in my mouth and told me to suck on it like drinking a milk shake. Well you talk about a coughing fit...I remember it to this day and I have NEVER had a desire to smoke a cigarette. Lesson Learned.

I am just curious...were Rolling Stores popular in other parts of the country? Does anyone else remember these wonderful big trucks?
Posted by Arlene @Nanaland at 4:00 AM

I grew up in Nashville and yes, we had the rolling stores and it was an exciting day when they came by. My parents divorced when I was 3 years old and I lived with my Mother, Grandmother, 2 aunts and 1 uncle. All but my grandmother smoked so I was used to it. When I grew up and went to work, I smoked too. After I had children, my 5 year old little girl asked me one day, "Mother, did you know when you smoke, you make the Holy Spirit smoke?" I quit that day and have never smoked again. A little child shall lead them.

I read that as the Rolling Stones! Ha ha

Funny that we used to have candy cigarettes! What were we thinking?? 😂

I’m in northern Canada , I’ve never heard of rolling stores but they may have been in other parts of Canada but I remember wax coke bottle candies and candy cigarettes, our aunt from the untitled states sent them to us every Christmas. The cigarettes came in two different sizes, the small thin short ones came in a box with popeye on them and then there bigger ones but I don’t remember the name. The big ones tasted much better lol,that was rough lesson on smoking but it did the trick,, your dad loved you enough to make you hate smoking! My dad wasn’t a smoker or my mum but my grand dad was, I still remember his yellow fingers.

I’m in northern Canada , I’ve never heard of rolling stores but they may have been in other parts of Canada but I remember wax coke bottle candies and candy cigarettes, our aunt from the untitled states sent them to us every Christmas. The cigarettes came in two different sizes, the small thin short ones came in a box with popeye on them and then there bigger ones but I don’t remember the name. The big ones tasted much better lol,that was rough lesson on smoking but it did the trick,, your dad loved you enough to make you hate smoking! My dad wasn’t a smoker or my mum but my grand dad was, I still remember his yellow fingers.

I sure remember the candy cigarettes! I can still imagine the chalky taste of them and the little red on the tip like they were lit! lol I don't remember a truck coming by like this but I remember the milk truck delivering milk and of course the ice cream truck in the summer months. It's amazing the photos we can find on the internet. Sure brings back memories!

Arlene, What wonderful memories!! I never liked the wax bottles but had the fake cigarettes a few times. I doubt my mother bought them though. I got a quarter a week for allowance and would go to the local supermarket and was able to buy 6 candy bars for 25cents!! I would give one to each of my siblings. Do you remember the necco wafers? I used to love them. We never had a truck come by like that but we had a milk truck that delivered milk to a box that was left by the back door. A bakery truck, a knife sharpener and there was a Charlie chip route that much to our disappointment never stopped at our house!
My paternal grandfather was a heavy smoker and he showed us his yellow fingers and told us that is what happened when you smoked. Gross!! He also got a tattoo in the Navy and always wore long sleeve shirts to hide it,(it was a ship). He made each of us 8 grandchildren promise that we would never get one and none of us did. I remember telling him girls don't get tattoo's and he said that could change, boy, was he right!!
I had one drag of a cigarette and thought it was disgusting and never smoked again!!

I remember the candy but not the rolling stores. My parents divorced when I was a baby, so Mother and Mama took me to the store. I liked wax lips. Never the cigarettes. Lol

I remember the candy cigarettes and the waxed coke bottles. I don't remember the rolling stores so maybe it was a geography thing. There did seem to be more of the little Mom & Pop stores around where my Grandparents lived. It was a treat to go and pick out a penny candy or a homemade cookie. I enjoyed hearing your childhood memories, Arlene!

Oh my the memories you bring:) We didn't have a rolling truck, but we had "Milk Men," and Bread Trucks. They would deliver from door to door. My mother would clean the empty milk bottles and put them on the porch for the milk man to pick up when he delivered milk. We would cover the bottle caps with aluminum foil and it would be play money. One of the few and fondest memories I have of my Great-Grandmother, was the bread truck delivering donuts. These smelled heavenly and tasted wonderful. At home the bread man would carry his bread on large trays with handles. I had a little border collie mix, who didn't like anybody coming to the house. One time he got loose and charged the bread man as he was delivering bread. The bread man put his tray between him and the dog. The dog jumped and landed in the middle of the tray. I am not sure how that ended, but both survived the ordeal. I remember the wonderful cream filled chocolate cup cakes he would deliver. I can't find anything comparable to these at the grocery store today. Thank you for sharing, and bringing back such good memories:)

I do not remember rolling stores but candy has a fond place in my memories too! We used to choose the gum cigarettes that you COULD actually blow smoke with...if you blew them powdered sugar would fly out! They were awesome! Also, my Great Grandmother Jumps used to always have those pink wintergreen discs in her candy dish...I love them to this day!! And yes, banana twins or ANY other Little Debbie treat was always a favorite!!!!

I never ever liked those wax coke bottles, but yes, I smoked my candy cigarettes:) I don't remember the trucks, but I do know they came where my family is from. We were on military bases for the first five years of my life, so my life revolved around that.

I grew up in a medium-sized city so we didn't have rolling stores, but we did have a milkman and a bread man who came to the door twice a week. We had a corner candy store close by and I did buy candy cigarets and those pop bottles with juice in them. For 10 cents I could get a whole bag of candy. Most were 2 pieces for a penny!! Good memories!

What an interesting blog post! Yes, I remember the plastic coke bottles and the cigarette candy. My parents would not allow Sister and me to have the candy cigarettes for the very reasons you wanted to have them!!

I don't remember the rolling grocery store truck. We always lived in a city so maybe the trucks didn't come to us since we had brick-and-mortar stores everywhere.

I remember candy ciggarettes and those wax colas.....but no rolling stores in Texas that I ever knew about!

What a fun post Arlene. We did not have rolling stores but we too had a bread man and a milk man that came to our house. Best part about the milk man is he lived next door. He would let my friend Claire and I wash his truck every week and then he would give us a quarter and an ice cream sandwich from his truck.

We did have those wax candies and also the cigarettes. I've never had a cigarette ever but did like the little candy ones. RJ