On Saturday we attended the memorial service for Wayne, Kendall and Landon's PawPaw. It was a very nice memorial. Marvin and I had time to sit and watch the video of photos that was shown before the service. We both noted that Kendall was the star of the video. Oh how excited Wayne was on the day Kendall was born. She was his first biological grandchild and he could not wait to meet her. We were all huddled  outside the door to the birthing  room and Wayne kept putting his ear to the door hoping to hear a baby crying.  We were all baby hogs that day!! This week has been hard on Kendall as she is not one who wears her emotions on her sleeve....like her Nana does. Landon has more Tankersley genes...he feels things deeply and you know when he is upset. Kendall is more stoic like her Grimm family. As Marvin put it, She feels things deeply but just cannot show it.

Both Kendall and Landon looked so nice...dressed up for the service. I asked if I could take a few photos after the memorial. 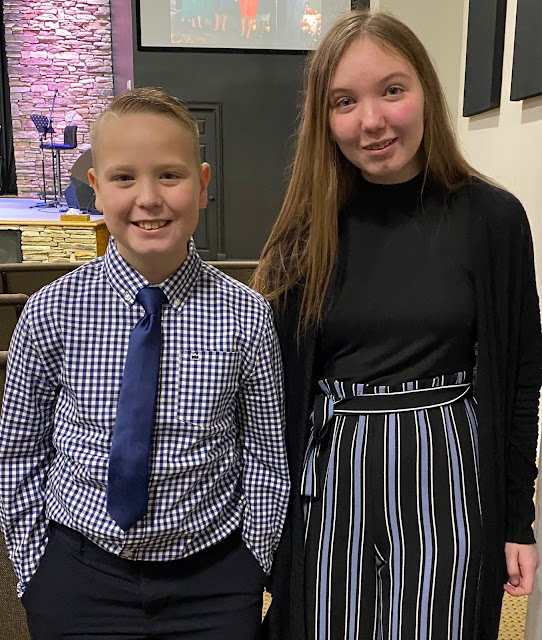 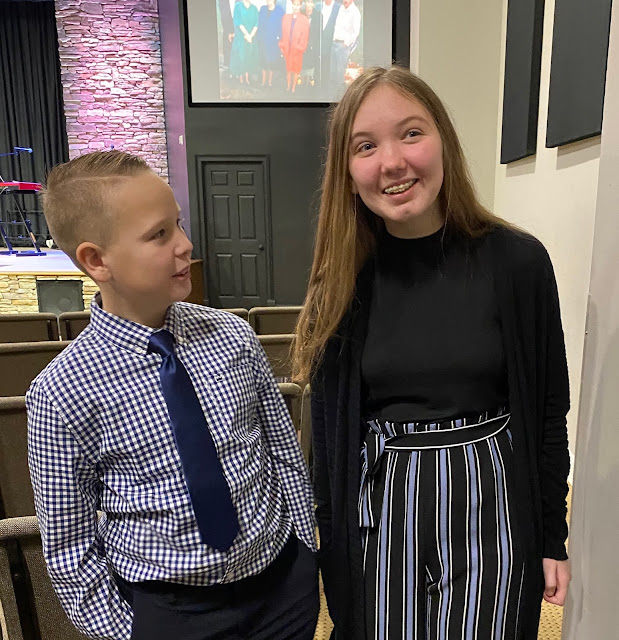 Kendall was doing her "I won't show my braces smile" when I told her I wanted a real smile. I think the smile shocked Landon! 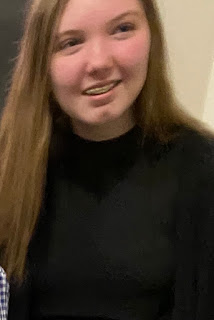 This one is a little blurry if I enlarge it as I cropped Landon out...he had a crazy expression on his face.:)  Kendall is so pretty and still has that cleft chin like her mommy and Uncle Charles.

Wayne's sister in law, gave the eulogy and she did such a nice job. There were smiles and tears. When I was speaking with Debbie after the service she shared that in the days before Wayne died, he would cry whenever they spoke of the grandchildren. He truly loved each and every one of his grands. He was not an emotional or talkative person but his grands brought out a playful side of him.

Now Marvin is the only grandpa for Amelia and Ben's children. It is a heavy burden to bear. Marvin did not have a grandfather when we grew up. He had a great uncle he loved dearly but no grandfather. When he met my Granddaddy Tankersley he felt that for the first time he had a grandfather. 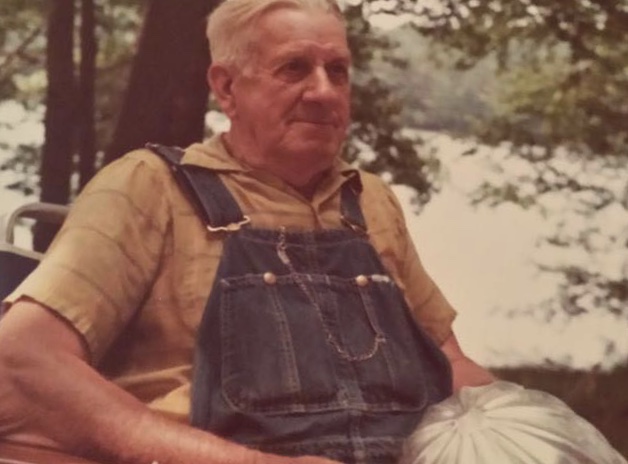 Marvin  could not have picked a better one! Granddaddy's birthday was February 19th and I never forget that day. I am blessed to have a great memory of a faithful husband, father, grandfather and great-grandfather.   My dear childhood friend, Linda, reminded me of something that I had forgotten. Linda's late mom's birthday was on February 14th. At our little country church they had a small bank that looked like a church and every week, the members with birthdays would come to the front of the church for recognition and a Happy Birthday song from the congregation.  The birthday boys and girls had to put some change in the bank.....a penny for each year of your life. Linda reminded me that Janette and Granddaddy always put their money in the bank on the same Sunday.  I had forgotten all about that old tradition. Now I am wondering what the money went for.....any ideas Linda?

Just a reminder of how swiftly our every day lives can become a memory.  Hug your dear ones a little tighter this week. I am hugging these two grands with some extra loving.
Posted by Arlene @Nanaland at 4:00 AM

Two precious young folks but a sad time. Grandparents mean a lot more to the young than we realize sometimes. I agree with you - hug, call those you love because none of us are promised tomorrow. Hope your Monday is a good day.

This is such a touching post Arlene. I don't understand how being the only grandpa for Amelia and Ben is a heavy burden though. I'm sure they will miss their other grandpa very much but all Marvin has to do is be there for them and love them. I don't see that as a burden but a joy. I only have the very best memories of all my grandparents, I think a grandchild/grandparent is such a special relationship.
Landon is a handsome young man and Kendall is such a pretty young woman.

Sweet grands. Sad for them. I remember going forward on birthdays. Money for Sunday School.

What a beautiful post to read and lovely pictures of Landon and Kendall! The memories of the PawPaw are ingrained on their hearts. Thinking of you and yours!

Bless those sweet grandchildren....it's hard to lose a grandparent no matter how old you are.

The kids are quite handsome and pretty. There is something special about a grandparent. I loved mine dearly or the ones that were alive. I hope mine will feel the same about me one day.

I'm so glad you were able to be there for the services, Arlene. Landon and Kendall seem quite young to lose a grandparent... I know they will treasure their future times spent with Marvin.

Kendall is a young lady now and Landon isn't a baby anymore either. They have grown up so fast! I doubt Marvin feels burdened by being the only grandpa because he is a great father and grandfather and that is all he needs to keep being. Losing a family member is always hard and I have lifted a prayer for all of you!!

Your grandchildren are beautiful and very blessed. Losing a grandparent is so hard. Sending prayers your way!

Sorry for your loss...

Arlene, it sounds like such a sweet yet sorrowful memorial. Keeping everyone in my prayers.