Well the Alabama Crimson Tide is the National Champion and made history for their number of wins. This Mama always buys son, Ben, a commemorative tee if his alma mater wins and this year, Miss Margaret wanted one as well. 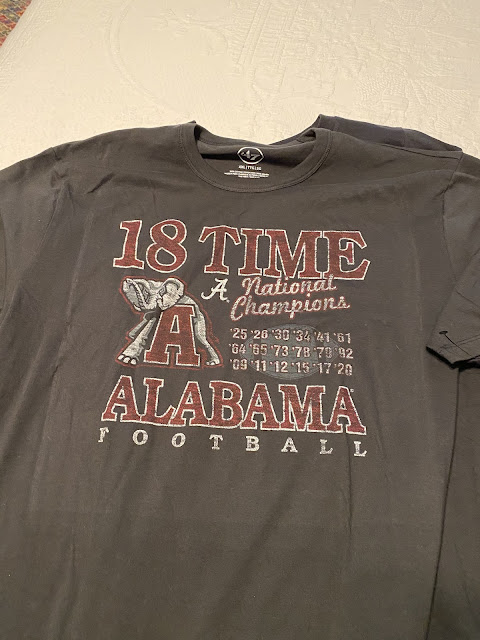 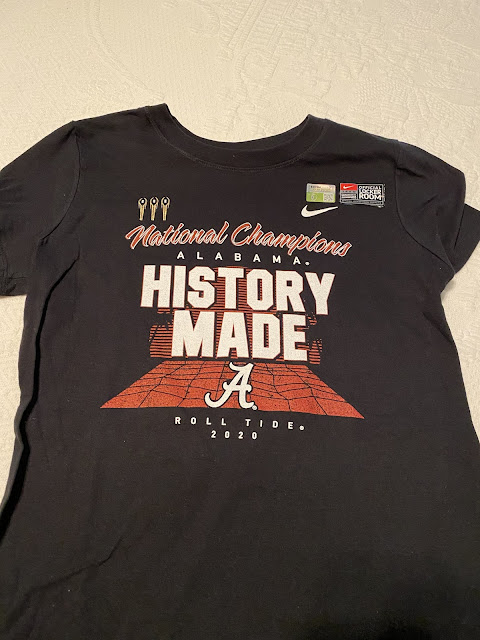 By the time I arrived at Academy the shirts were picked over and only Margaret got the locker room shirt. Here in Alabama, fans line up even on a cold January night to be first in line to get their team shirt. Academy should know that most Bama Fans are not smalls and mediums. If you wear that size, you were in luck.:) I had to get Ben a bigger shirt and I hope after it is washed for a while, it will shrink.

After buying the tees for the Bham Grimms , Nana stopped at a little shop called Sass and Company located in a shopping center near the Glens. I had eyed it for a while and decided today I had time to browse. I was the only one in the shop but I left with my own Alabama long sleeved tee. 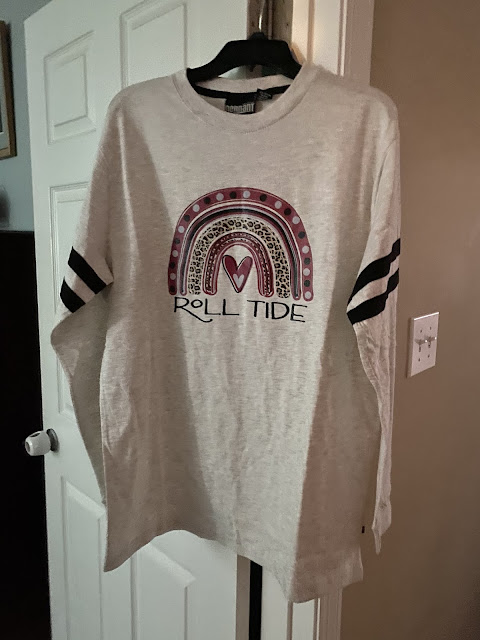 You may be wondering why Elliott did not get a tee. Well Elliott is an LSU fan. That stinker. Ben told me that last night, E was pulling for Ohio State. So no shirt for him until he repents. :)

When we first moved to Alabama 36 years ago, we were surprised by the rabid allegiance to Auburn or Alabama. In Georgia, there is a one sided rivalry between Tech and GA. Every now and then Tech will pull out a win on Thanksgiving weekend but it is seldom.  I used to tell my family in Georgia that when you apply for your Alabama drivers license you must choose to be an Auburn fan or an Alabama fan. For many years we really did not care for either team but when Ben went to Bama, we became Bama Fans.

To my friends who were pulling for Ohio State, your team is a good team. They cleaned Clemson's clock. Most Bama fans thought it would be a rematch of Bama and Clemson in the final game.  I did not think it would be an easy game and it was not....but Alabama is just a hard team to beat when they are determined and this year they were fighting to reclaim their title.

My Beloved was a true Alabama fan (spell check won't allow me to use just the last 4 letters) and watched them faithfully even when we were still living in Colorado.

I like YOUR shirt the best -- cheering for the team with a country-style design.

It was quite a game! We started watching college football a few years ago but I better not say the team we like best that has a Tiger! haha! We were rooting for Alabama for this game though! I love your long sleeve tee shirt...perfect!

Our neighbor down the road is a Bama diehard so I know is basking in the win. Awesome shirts you picked up; I really like yours the best, Arlene.

Oh my goodness Arlene, this is hilarious! First my congratulations to Alabama, it was a great game. That being said, Ohio State had a rough year, and they almost didn't get to play, because they didn't get to play the required games to be in the championship games. I am proud of our guys. As for Ben, I will get him a Buckeye Shirt:) My husband is a PENN State fan. I didn't get a chance to comment on your Monday post, and wanted to tell you how much I enjoyed the photos of your home. It is lovely. Thank you so much for sharing. Many blessings to your and yours my friend.

Well, I am from Ohio and have immediate family members who graduated from The Ohio State University so I had to cheer OSU on. Our friends who are staying next door are both OSU grads, too! The Bucks were just out-played. Y'all won, fair and square. We were thrilled when the Buckeyes beat Clemson though! The new t-shirts are great. Glad you were able to get them!! On to next year!! xo

We're not sports people here, so I don't follow any of this. But I did laugh at Elliot and I'm glad you were at least able to get shirts for all of you!

Have family that are both Auburn and Alabama grads/fans. Not me, I pull for the Dawgs;-)

What a great season and championship! Roll Tide