We spent Saturday with Ben and Katy. It was so good to see them in person and to know that they are doing well after the tornado. 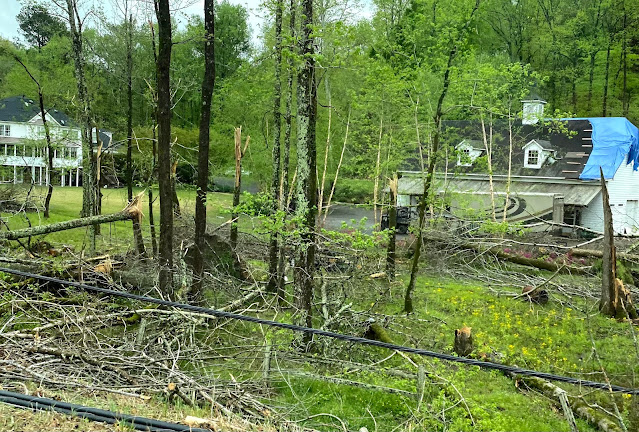 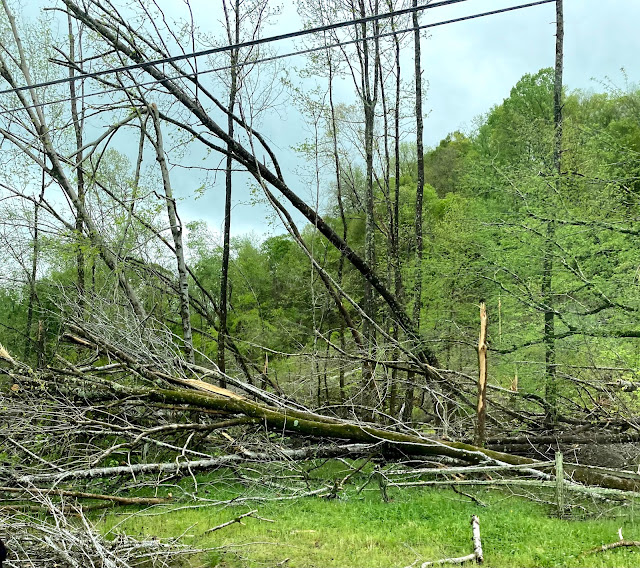 These are pictures from Cahaba Valley Road leading to Ben's subdivision. You could clearly see the path the tornado took. Some houses were pristine, others destroyed.

Ben's house is the second one...with the blue tarp and white garage doors on the hill.The houses on the other side of his street had ALL their windows blown out.  Blue tarps and plywood were everywhere. The house behind them was totally destroyed. It seems the tornado was going up and then touching down. 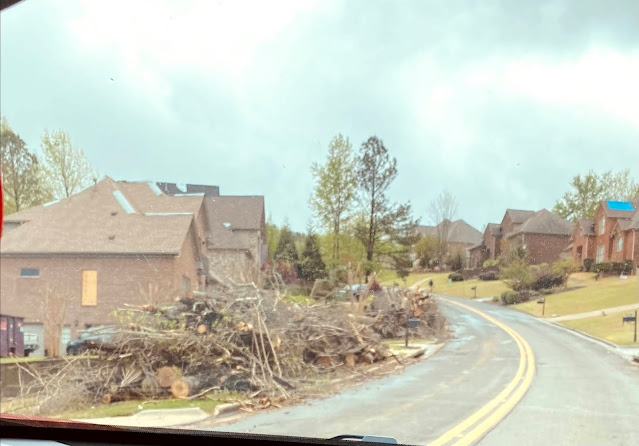 Here is the other side of the street....all those trees just gone. Thanking God that there were no fatalities. I am so thankful for basements!! They were a life saver that day.

We asked if it sounded like a train as we always hear. Katy said it sounded like sustained thunder for about 15 to 20 seconds though it seemed longer.  When they stepped out of their basement into the driveway, they could not believe the devastation. 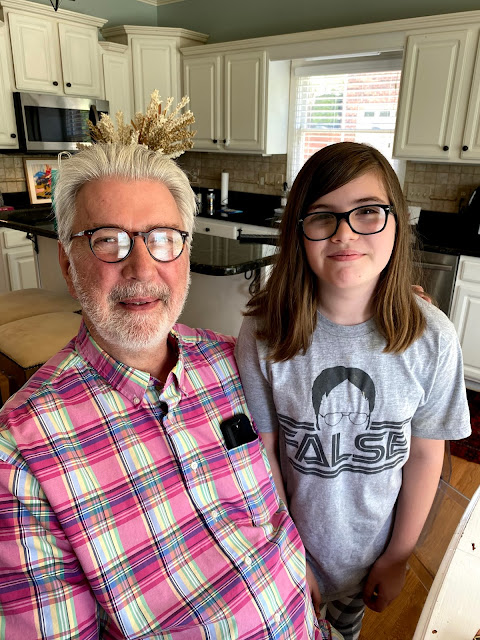 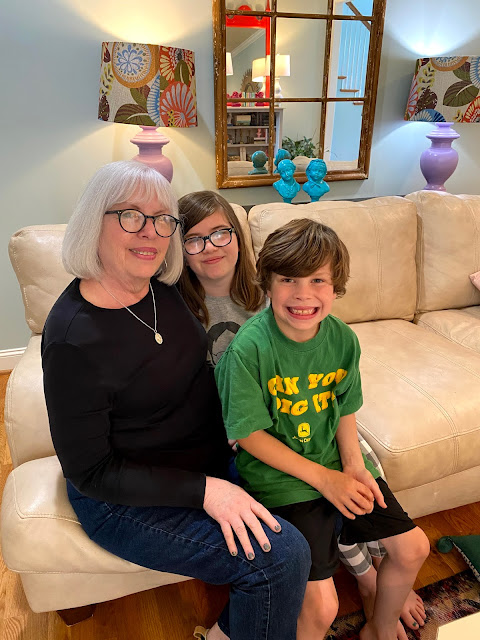 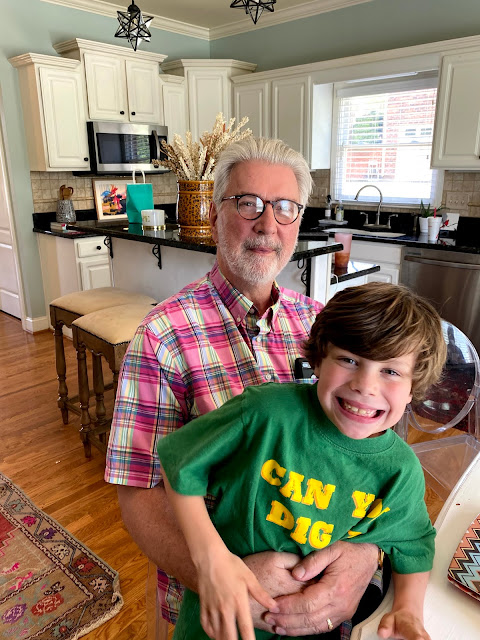 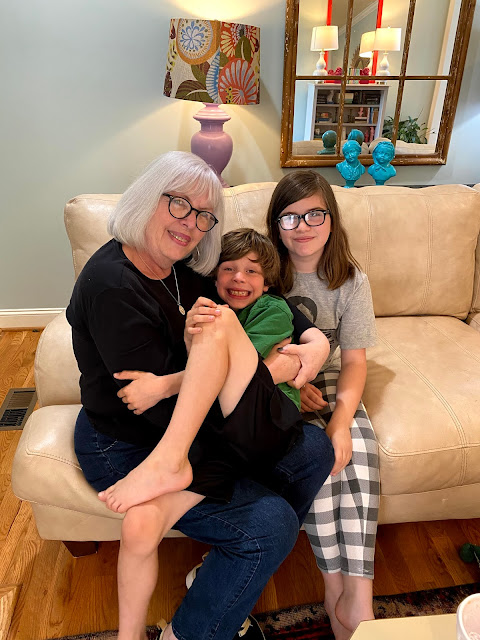 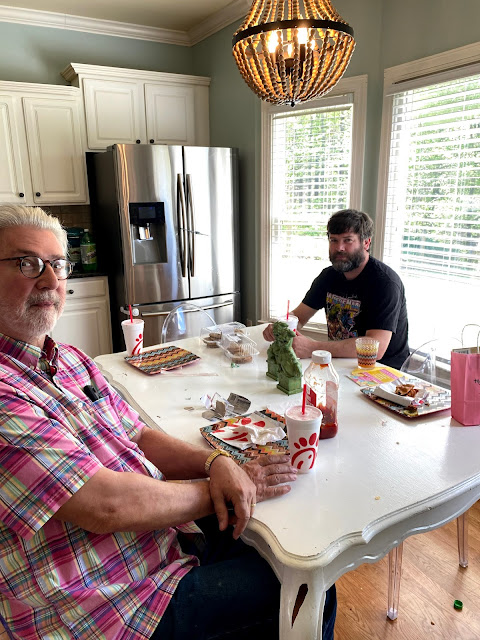 Baylor was playing while we snapped pictures so we did not make him come pose for pictures. Katy took some for me but did not want to be in front of the camera.  As you can see we picked up Chick Fil A for lunch. Always a winner with the grandchildren.

Margaret took me up to her room where the ceilings in her bathroom had been removed. They hope the roof will be repaired next week. Their new garage doors are in place but it will be a while before their house is back to normal.

Thanking God once again for his Protection of my dear ones.

Posted by Arlene @Nanaland at 7:16 AM

So glad you got to see them in person. It is odd how those things work and yes, thank goodness for basements. I don't think anyone when we were growing up would have seen the need for them, but after the Dadeville tornado I noticed all new builds had them or at least a storm cellar.

Arlene, I continue to praise the Lord for his protection for all those involved in those storms. Thank you for sharing the photos of your family's neighborhood along with your family. Thinking of them and continuing to pray.

Arlene, thank you so much for sharing the pictures of the storm and the pictures of you and Marvin with the grands, priceless. People are move important than things. God was certainly in control, with his divine protection. Many blessings to you and yours my friend.

I'm also thankful they are all ok. Tornados are so crazy, the way they bounce around and damage some and leave some alone.
Cute pics of the kids and you two!

I know it did your heart good to see them all and to know that they are okay and the house can be repaired. The devastation in their neighborhood is shocking. Praise God over and over that no one was hurt! Thanks for sharing the photos!! xo

Well, I certainly missed a lot when I was in California. I'm so sorry to read about the tornado--shocking to see how it hits certain parts of the neighborhood and spares others. I'm so relieved that your son's family is okay and that his house can be fixed, Arlene. Tornadoes are not a part of my life up north and the mere mention of one terrifies me. Glad you got to visit and see the kids ♥